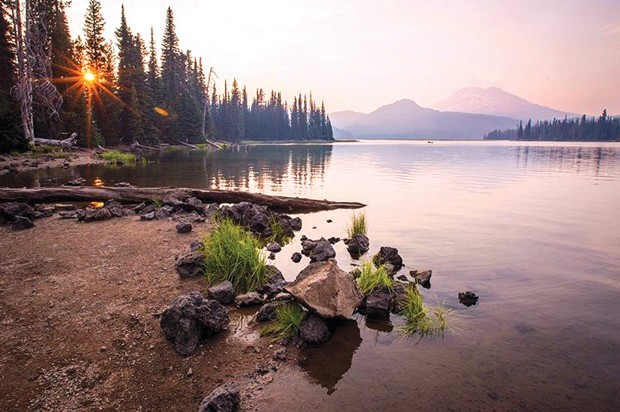 Commercial Development in Whose Interest?

It looks like the handwriting is on the wall. With the potential demise of Joe's Garage at the Westside Shell station, Bend appears well on its way to becoming a little Los Angeles—where all pretense of any community resistance to purely self-interested corporate strategies of commercial development died decades ago.

Joe Palmeri, a small Bend businessman with 33 years of serving as many as three generations of Bend citizens, appears about to be thrown into the ash heap of history. The high-quality auto repair which took place in his garage offered a valuable type of personalized service on the Westside of town.

But his leased property arrangement was put in jeopardy when the new owner of his garage land (Andretti Petroleum Group and Colvin Oil) opted for a different commercial development space which eliminated the garage and proposed only gasoline pumps, a convenience store, and a car wash.

This new commercial development proposal fits nicely with the broader corporate goals of Andretti Petroleum Group: to quickly expand the number of gas stations and convenience stores it presently owns in California (44) by acquiring, through a merger with Colvin Oil (2017), an additional 51 gas stations and convenience stores in Oregon and Washington.

However, the Bend City Council must give final approval to the commercial permit issued for this project and just possibly an outraged Bend citizenry that still believes in a concept of economic growth that protects its own valuable small businesses, like Joe's Garage, can put a stop to commercial development that ignores such community values.

Smoke fills the air we breathe because our forests are burning at an unprecedented rate. Floods ravage parts of the world while other areas burn to ashes. Our oceans swell with plastic garbage we blatantly toss away. Straws are choking sea life throughout the world. Wildlife around the globe is losing habitat the size of football fields on a daily basis. The list of environmental destruction goes on and on. Does anyone care?

We mow down forests to build more homes for all the burgeoning people populating our neighborhoods and our planet, but to what effect? Our own city of Bend was once an oasis of clean rivers, tranquil streams and placid lakes. Our surrounding forests and mountains were an oasis for deer, elk, coyotes and numerous other creatures. Places that were once pristine woodlands, meadows and open space are choking with thousands of new homes, new strip malls, more roads and thus even more people, and more traffic. Maimed wildlife lay lifeless by the side of the road as drivers speed through areas these animals once called home. Cougars are shot because people bring their livestock into the natural habitat where these animals live. Our surrounding natural environment has become a playground to be trampled and developed until the beauty of what brought everyone here in the first place no longer exists. Does anyone care?

It seems we are all the frogs within the slowly simmering pot of water about to be brought to a roiling boil, yet everyone continues to go on with their lives as if none of this matters. Young couples walk the streets with newborns in carriages, and perhaps another child or two alongside them. They frequent the giant box stores loading carts with cases of plastic water bottles, gobs of sugar filled pre-packaged "food" and proceed to load it all in their oversized, gas guzzling SUVs they let idle in the parking lot as they check their phone before driving away. Do they not care what the state of the planet will be when their children grow up – or do they just assume it will be taken care of by someone else?

We all have a responsibility to be good stewards of this planet. As the saying goes, "There is no Planet B." As I write this, the coal industry is celebrating Republican rollbacks of environmental regulations that were put in place to protect the air we breathe and the water we drink. In addition, the Trump administration is rolling back clean car emission standards that had proven to be successful environmentally as well as economically. Cancer causing pesticides have been found in our food supplies, yet Republican representatives continue to support Monsanto and other chemical companies over the health of their constituents. This is not a sustainable way of life. We must ALL do better to ensure the prosperity of our planet and ultimately human survival. We cannot have a healthy economy without a healthy environment.

It's been reported a "Green Wave" is coming. Well it can't come soon enough in my opinion. How are you voting this November? Are you voting? Have you researched where your candidate really stands on issues regarding the health of our environment? The condition of our planet is staring us right in the face. Do you care? If so, VOTE!!

Tracy – Vote if you're eligible to do so, for sure—though we're not going to stem this tide without personal actions, too. According to a report from the Intergovernmental Panel on Climate Change in 2014, the most significant sources of pollution were: Industry at 21 percent (can be curbed through legislation/regulations, and thus, voting), Electricity and Heat Production at 25 percent (mitigated through mandates for green power [influenced by voting] and also personal consumption choices), and Transportation at 14 percent. The last one is definitely addressed through both government and personal choice. As we speak, the City of Bend is working on a transportation plan that aims to reduce Bendites' vehicle miles traveled. Voters would do well to express their support—and also to dust off that commuter bike or walking shoes and walk the talk. Meantime, come on in for your gift card to Palate!