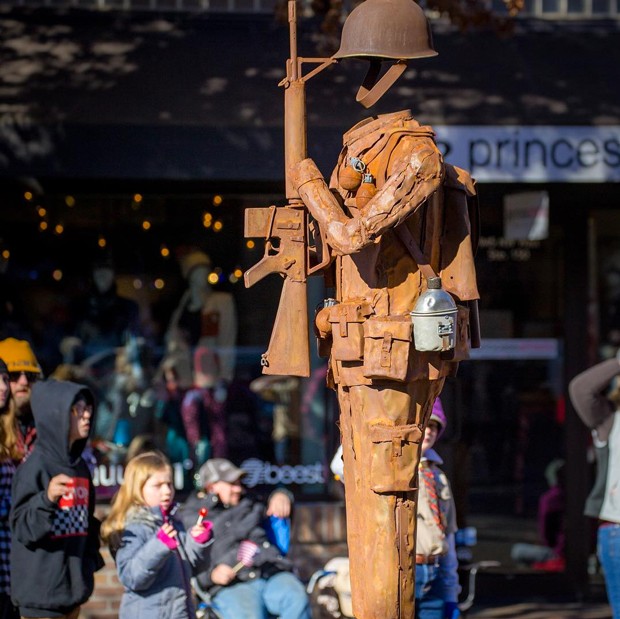 What I'd love to see em fix is the parking. The food and drinks are always great but there is never anywhere to park. I just have to go park at Phagans and hope they don't get mad because I live on the entire other side of town and cant beat the crowd there.

—Will James, via Facebook.com

Order on the border?

Americans don't see firsthand the impact of misguided, failed foreign and economic US policies that result in the fears that Hondurans, Guatemalans and Salvadorans face daily. What Americans see, fed the unending lies by the Bozo Truth Fairy, are thousands of "invaders" heading for our southern border. The truth belies these effluents and places the majority of the blame squarely on this country.

The US drug war launched in 1971 by President Nixon pushed cartels from Colombia into Central America. Latin American leaders implored the US to take a different approach to drug consumption in this country, but US administrations continued to fund the inane ineffective drug war and poured hundreds of millions of US tax dollars into training corrupt police and security forces in Honduras and Guatemala in the name of fighting drug trafficking.

US support of brutal regimes in Guatemala and Honduras fueled the violence and instability that now makes life unbearable for ordinary citizens. In support of US government interests the CIA orchestrated a coup against the democratically elected president in Honduras in 1954, and the US government supported the 2009 military coup in Honduras and continues to support the despotic, illegal government that colludes with criminals while crime runs rampant and goes unpunished.

Gang violence, especially in El Salvador, has its roots in the US. The international criminal organizations that terrorize Central American communities were exported back home from LA street gangs and metastasized in the wake of civil wars the US government orchestrated.

This is more than a humanitarian crisis. The United States bears a great deal of responsibility for the dire poverty, violence and corruption in Central America. The US government has a history of standing on the wrong side in conflicts in the region, consistently supporting dictators over democratically elected officials. Too frequently, America has intervened in favor of US business interests, to the detriment of Central American civil society.

In spite of the all the lies and ignorance surrounding the caravan heading northward, it is indeed a small army of pitiful wretches, mostly women and children, who are merely trying to flee a life in a hell that has mostly been created for them by the failed policies of the US.

My comment has to do w the clipping of flight feathers so the swans cannot fly ... doesn't that make them more likely to be a victim of predators? I know this has happened in another state, possibly Arizona, and the swans they had have dwindled due to predators killing them as they cannot fly.

The flight feathers on Sydney's wings were only trimmed temporarily.

ODFW and the Trumpeter Swan Society decided Sydney would have a greater chance of survival if she stayed with her parents for the winter. They wanted to temporarily prevent her from flying so she won't be able to fly into power lines - a huge threat to trumpeters. As far as predators go, Sydney was much more vulnerable when she was a tiny cygnet.

Pete and Eloise are excellent protective parents who do a great job of fighting off any potential threats to Sydney.

Once the spring comes, Sydney will grow new flight feathers and be taken to Summer Lake to live her life as a free swan. Sydney is in NO WAY a prisoner or part of an ill advised petting zoo.

When is it going to stop?

My heart is sad and my eyes are full of tears, one more massacre shooting. This one is so hurtful—young college age—their future just starting—out for a good time with friends (as painful as high school students dying). Survivors remarks the same as before— "never thought it would happen here," "read about this all the time somewhere else." Will our community be next?

Heartfelt tears. I'm so sad to see these kinds of commentaries weekly on the news— when and how do we make this stop?

I have never experience this level of fear growing up – in high school, college or presently. What we are experiencing is what happens in third world countries, not here in the USA.

Something needs to happen with weapons reform (and this doesn't mean killing the 2nd Amendment rights), along with more help with access to mental health services. Ironically several of the past incidents have been individuals dealing with PTSD – how is this being missed? No follow up? No assistance?

Again my heart is heavy, I'm so sad for the families, the survivors and the law enforcement folks who have to respond to these situations. I'm a very positive, optimistic person but also have become aware that these situations (shootings) can happen anywhere- yep, even here in Bend, Oregon. Weapon reform needs to be dealt with now, not lip service— action.

Blessings and prayers to all that have been impacted by these shootings. It's time to put pressure on the current administration to step up, do something, quit just giving your condolences and then business as usual.

Mary — Ah, the well-meaning "thoughts and prayers..." Not much to add to what you've already said, except that many "third world," AKA developing countries, don't experience mass shootings on any level that compares to our country's rate. Come on in for your gift card to Palate.