As ministers in the United Methodist Church, our hearts break this week at news that our parent denomination—by a narrow margin—has voted to double-down on its ban on same-sex marriages and the ordination of queer clergy. The Jesus about whom our sacred texts tell us goes out of his way to accompany and love people, especially those who are held in suspicion by the mainstream culture. We believe our call as Christians is to place ourselves firmly alongside anyone experiencing exclusion or oppression, for it is in those relationships—in that solidarity—that we find the deepest Love. 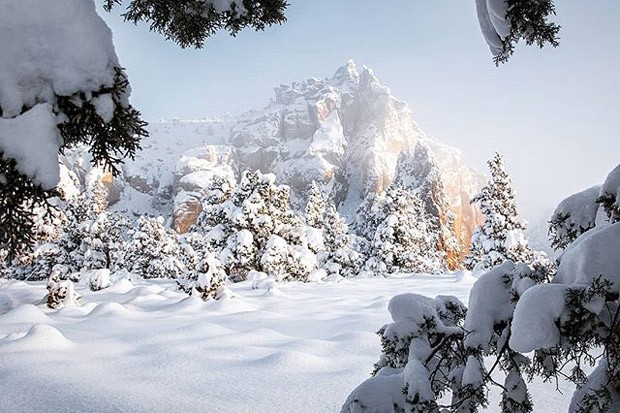 Unfortunately, Christians get this wrong too often. There is much to repent for. We lament that the LGBTQ+ community has been debated and threatened. We lament that queer folx have had their marriages and vocations questioned or invalidated. We lament that too often churches have not offered the cover and protection that our queer siblings long for and deserve.

Thanks to Chris Miller for his article covering the challenges of parking downtown with all the fresh snow. I'd add the following tips: Please don't just abandon your vehicle where you got it stuck, it's your responsibility to move it to an appropriate place. And don't even try to drive if your car isn't up to the test. Please do a thorough job of cleaning your windscreen and windows, the little porthole you've cleared is unsafe and is a measure of your laziness. For heavens sake, slow down, people! I know you think your big diesel truck or Audi sticks to the road like glue, but it doesn't. Don't count on the snowplows coming around your residential street, they probably won't. Lastly, if the conditions are too burly for you, consider moving (back) to a lower latitude.

The women's issue? Please. The Bend community needs the weekly Source's "Women's Issue" like Venezuela needs a week of fasting. Why is a women's issue necessary? Implicit is the false notion that women are inferior and need a boost. Of course, the issue portrayed the usual sparkling view of women and all things feminine.

Women have become a protected group that is safe from criticism lest you be labeled a misogynist. The celebration of women (eg. women's awards, women's marches, celebrating girls in sport) mostly by other women, is wearying and overdone these days. There is no need for a "Women's Issue" while the influence and power of women is growing at a dizzying rate. Representation for women has been gained and respect achieved. An example: women make up 58 percent of all college undergraduates (maybe it's time for "Take your Son's to Work Day"). As well: consider the advances women have made under Title 9, look at all the women recently elected to Congress and all the candidates for president from the Democratic Party. Women, these days, are portrayed by the media as smarter, kinder and cooler than men. Men, especially white men, are Homer Simpson-like dupes, arrogant, sex-obsessed and selfish (see your weekly Amy Alkon column). It's become a liability to be a straight, white older male (Joe Biden beware). The bandwagon is sagging under the weight of this trendy disdain for men.

The Source cooking up a "Women's Issue" prepared by a multitude of well-intentioned chefs is inedible. It feeds the cliched idea of the oafish, overweight, bumbling, inferior male—increasingly prevalent throughout society these days.

This glorification of women has run me down. The Source (and other media outlets) needs to widen their lens, soften their stance. I submit it's time for females to stop tallying up resentments toward men and promote not preferential but equitable opportunity for both genders.

PS: Lest readers make snap judgments about me based on the above sentiment concluding I am a MAGA hat- wearing, wall- building misogynist- know that I am an old lefty, a liberal, pro-choice Democrat with a cat named Chairman Meow who despises our inept and corrupt president.

In response to Women's issue

Women's power and influence is growing, but that's a good thing. It's nowhere near what it is in Scandinavia. Until the Senate is near 50 percent, and that's a long way off, I support the movement. Half our population and brain power should be taken advantage of. It's no accident that the more gender equality there is in politics, the better managed a country usually is.

Charles: I don't know how you received the letter Rick wrote, but thanks for responding. When he mentions an existing "influence and power" of women, maybe he's referring to white women, who attend and graduate college at rates on par with white men— yet not the case for women of color. The achievement and gender pay gaps are real, and it's a gaping gap for women of color.

It's true that the House has the largest contingent of women everat nearly 25 percent women. Since when is 25 percent parity?! Charles, when you pick up your gift card, maybe treat Rick to a coffee to talk about how equity for women—and especially women of color—doesn't equate to a "trendy disdain for men." Nowhere in our Women's Issue did we denigrate men. Respect can and does go two ways.