Abuses of every kind are in the news these days, but there is an abuse that effects our entire planet, and that is the population explosion that overwhelms all resources and aggravates environmental quality. We need to dramatically slow the birthrate over the entire world so as to better manage the impacts of too many people on our precious home-world. Incentives could be cash or status or things people like. 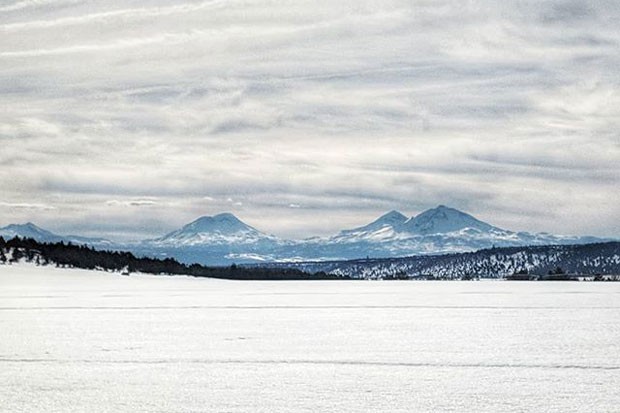 Thank you for always sharing Jim Anderson one of the best features in the Source and in our community. Jim's words and thoughts are always so refreshing, down-to earth, and quite uplifting. He has done so much in the past and present to help the Forest Service provide excellent conservation education and interpretation to its forest visitors. Jim is a priceless treasure and we thank him everyday for his gifts of knowledge, wisdom, and humor.

"Jim Crow" represented a formal, codified system of racial apartheid that most Oregonians associate with "a long time ago in the south." Racial order was enforced with laws that affected almost every aspect of daily life. We like to think of ourselves as moderate, law-abiding folk far from the struggles of racism, but Oregon's history, from frontier days to the present, paints a very different picture. Let's change that, and support HB 2015, the Equal Access to Roads Act.

House Bill 2015 would make standard licenses available to all drivers who can meet the requirements to drive regardless of their citizenship or immigration status. Many states, including California and Washington, already issue licenses to drive to all residents who meet the requirements for safety, insurance, identification, and residency, regardless of immigration status. Their policies have been implemented successfully, with significant benefits for public safety and community cohesion.

Preventing Oregonians from getting a driver's license because of their citizenship or immigration status puts our immigrant friends and family at risk. Immigrant Oregonians shouldn't be separated from their families over a traffic stop. Our broken immigration system, that has exploited people and made them as second class citizens for decades without a path to legal citizenship, will not be fixed in the Oregon legislature. However, we can take compassionate steps towards ensuring that 18 percent of BLP students of color (many with mixed-status families) and all Central Oregon immigrants feel safe and supported because no Oregonian, including immigrant Oregonians, should live in fear.

Who needs Phil's trail system or Maston for an early spring mountain bike ride when you can ride ...or should I say "need" to ride ...your mountain bike right here in the heart of Bend? It has been a month since our last major snowstorm, and weeks since the roads have been clear of snow. Automobile travel lanes are clear of debris and gravel ...and it all now seems to have settled in the bike lanes. Better keep the road bike parked. As I write this letter, and without exception I have seen, every single bike lane on all major transportation routes in the middle of our wonderful city are clogged with gravel and other debris from the curb to the white stripe, leaving the dedicated bicycling commuters, shoppers and recreationists with little choice but to put their lives in harm's way. I am simply at a loss for words to describe my despair at our collective unwillingness to embrace the simple, and economically and socially sound, responsibility of making bike lanes safe and accessible. Here's an idea: following the next major snow storm let's clear the sidewalks and bike lanes first! Leave the car at home and take a bus if you don't want to walk or ride.

We hear you, Mr. Burns, that it can be uncomfortable in this day and age to be a middle-aged white male. You are feeling the effects of shifting societal views on power and gender, and what equality actually looks like and means. There is a lot of uprising going on.

We individually read your letter to the Editor dated March 6th where you admonished the Source for publishing a Women's Issue and, while we had our separate reactions, we did collectively agree on one thing for certain.

It IS time for a 'Bring Your Son to Work Day'.

We would love for our sons to witness a typical day in the lives of their mothers, aunts, female friends.

Per your suggestion, our sons would meet their mother's male co-worker, doing exactly the same job, who is being paid 118% more (assuming both are white). [Bureau of Labor Statistics - 2018]

They would take in what their mother hears on a regular basis, "If you would just smile more, then ______". We'd love to hear what they think that means.

They might, if they watched closely, witness their mother being casually groped in passing. As a liberal voter, you may already know that 33% of women will experience some sort of sexual violence in their lifetime, but did you know that eight percent of female rape victims were raped at work? [National Sexual Violence Resource Center]

They may, in a meeting, listen to their mother assert a creative answer to a problem, only for her statement to go unnoticed until a man states the very same thing – and gets the credit for it.

Most of the undersigned work for organizations that are predominately female-run, and therefore do not currently experience these issues as often in the workplace. We each, however, have fresh, daily "because I'm a woman" wounds that we carry around as we navigate our worlds. You might carry wounds too. Yet the difference is that your wounds are most likely not based simply on the fact that you were born male.

Per your letter, we are enjoying some of the best times we've ever had as women with respect to representation in positions of political power. And yet...

The United States is 50.8% female per the most recent US Census Bureau estimates.

Even after the most recent elections:

76% of our Congress is male. 75% of our Senate is male. 77% of our House of Representatives is male. 72% of elected state-wide executive offices are held by males. 71% in State Legislatures are male. 79% of U.S. Mayors (in cities over 30,000 in population) are male. [Rutgers Eagleton Institute of Politics]

You see, we are not equally represented in positions of power and are far from the position of majority in power. Yet. We will get there when our sons come to work with us and enter the work force themselves valuing women's accomplishments as the stand-out achievements they are.

Would you like to come to work with us, Mr. Burns? Your cat can come, too.

Kevin: I can personally attest that the bike lane going west on Greenwood into downtown is now swept. Oh, wait—that street was just closed for train-related repairs. (Insert comic wa-wah sound effect here...) Come on in for your gift card to Palate!