How to accidentally find yourself in the music industry

Some might say Playboy Manbaby is a silly name for a band, or for anything, really. But maybe that's the point? That's something Robbie Pfeffer, lead singer of Playboy Manbaby, makes note of about himself and the Phoenix music scene. It's more of a happy-to-be-here type of situation. You'll notice that in the theatrical punk rocker's music as well. It seems they never take themselves too seriously – but they bring an undeniable energy to each song that can't be overlooked. 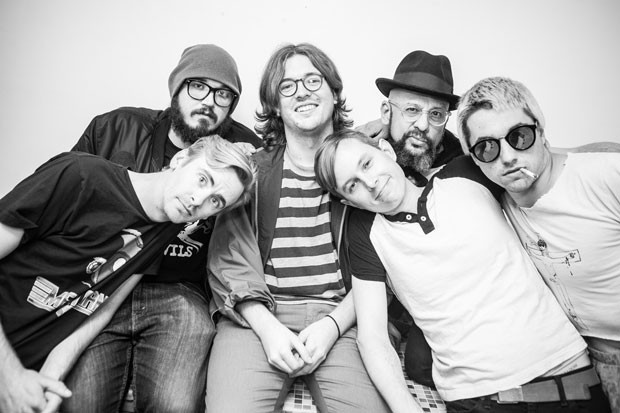 Over the phone, Pfeffer tells me how his love for visual arts led him into music (he still makes all the band's cover art) and how they wrote a bunch of demos in a town north of Phoenix that Pfeffer says blew away the band with its "lack of beauty." Here's more of what Pfeffer had to say about his band, headed to Bend for a Valentine's Day show with metalheads Okilly Dokilly, who might get you moshing with your loved one instead of holding hands.

Source Weekly: What would you describe as your sound and influences?

Robbie Pfeffer: We're all kind of music nerds. I really personally like unique voices or, like, ugly voices. So I'm like a big Tom Waits fan and that sort of thing. I just liked non-traditional songwriting. That's what I find most interesting. We mess around with a lot of stuff.

SW: You have a pretty unique voice. When did you start figuring out that you could sing and do this crazy stuff with it?

RP: I never really intended to be in a band. I do a lot of visual art and that was always my sh*t, ever since I was a kid. I found an art scene when I was like 18 and we started an open mic. It was so poorly attended that the host was like, "You should just do poetry!" And I was like, "That sounds awful!" But we had so much dead time that I just started writing stuff, like slam poetry. So that kind of led to me being in a band. I accidentally just stumbled into it.

SW: Are you pretty stoked about it now, that you get to do this?

RP: Oh, yeah! Life's a trip. It's just crazy. Just kind of one thing leads to another if you're willing to put yourself out there.

SW: Are you guys working on a new album this year?

RP: Totally. We went up to a cabin and wrote a bunch of demos for songs. That was kind of a fun, weird, out-of-our-element type of thing. We're going to kind of flesh them out on the road because we have a couple days off. They're skeletons now. We just kind of have to throw in some organs and patch them up with skin along the way. We literally left the cabin once to get breakfast. We've got like 13 songs from those three days. We were just working 'til we were too drunk or tired to continue, and then we'd just pass out and do it again. It really had a continuity that was nice.

SW: What can people expect from one of your live shows?

RP: Definitely energy. But I like to mess with expectations. I like the theatrics of the whole thing. I want it to be a party. It's definitely not a somber, sit-on-your-feelings kind of thing – it's more of, let's enjoy ourselves cause we'll all be dead soon.