"You Were Never Really Here" is a towering achievement 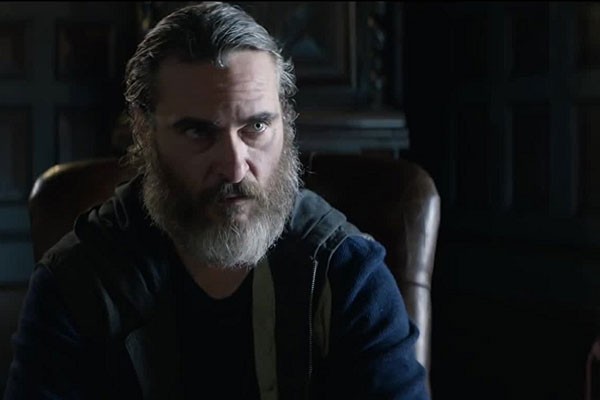 Joe is a combat veteran suffering from PTSD and a sense of duty to missing and trafficked children—a hired gun rescuing missing kids and dispatching the slavers in a brutal and unflinching fashion.

Joe doesn't use a gun or knives or any kind of weapon that comes across as inherently cinematic. The people he's killing are evil and anyone who sells another human into slavery deserves what's coming to them, obviously, but "YWNRH" doesn't want the audience to cheer for Joe's chosen outlet for his limitless aggression and rage.

Writer/Director Lynne Ramsay wants the audience to feel complicit in Joe's mission, so she gives him a weapon we want to look away from, to cover our ears from its deafening taps. Joe uses a small ball-peen hammer, swinging it like its Thor's mighty Mjolnir and he's the only one worthy enough to carry the weight.

When Joe is hired by a New York state senator to rescue his kidnapped daughter, Joe becomes embroiled in a conspiracy worthy of Alex Jones, far above his pay grade and much more layered than his poor misfiring brain even cares about. He doesn't care about the who or the why. He just knows a little girl is missing and he can get her out safely.

Joaquin Phoenix is astounding as Joe, once more redefining what a true chameleon-like actor can accomplish. He's a giant, towering over everyone who gets in his way and cutting an imposing figure carved from rage and blood. Compare his work here with that of "Gladiator," "The Master" and "Inherent Vice," and Phoenix is completely unrecognizable. There's no ego on display, only a savage artistry that solidifies him as one of the most complex performers out there.

Ramsay is equally astounding. She's quietly been making some of the most profoundly realized films of the last 30 years without compromising her sometimes-enigmatic directorial style. She's such a master that she could easily feign a more mainstream palatable aesthetic, but her brand of cinematic expressionism should never be tamed. With this, "Ratcatcher," "Movern Callar" and "We Need to Talk About Kevin," Ramsay has become one of the most exciting filmmaking voices in modern cinema.

As Joe becomes further enmeshed in the hunt for the senator's daughter and his life becomes more dangerous, his PTSD starts to gradually reshape the world around him. He's not a detective unraveling a terrible conspiracy, as these movies would typically have the character be. Instead, he's a great beast stalking the margins of society, delivering vengeance and protecting the innocent.

When his trauma becomes so extreme that he can barely focus on the world around him, the audience is given a peek into the psychology of a survivor as upsetting as it is startlingly original. This is "Taxi Driver" by way of "Oldboy" and a future classic in the making. Calm anxiety.