A perhaps too-positive portrayal of a Supreme Court Justice 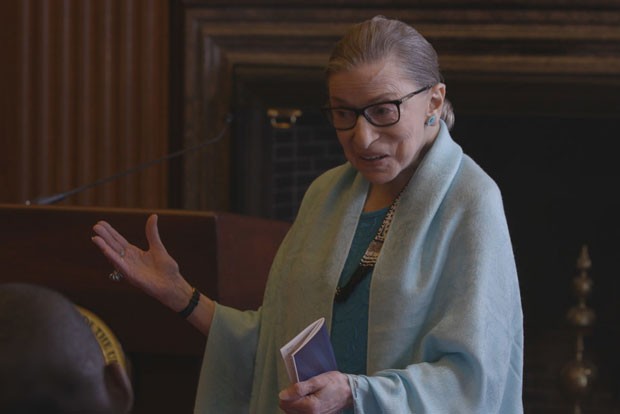 There are three kinds of documentaries: those that lionize their subjects, those that attack their subjects, and those that attempt to provide a balanced, objective perspective. "RBG," a cinematic biography of Supreme Court Justice Ruth Bader Ginsburg, fits in the first category. If there's a negative about Justice Ginsburg, you won't find it in Julie Cohen and Betsy West's film. Nevertheless, despite its overly praiseworthy tone, there are areas of interest. Cohen and West elucidate Ginsburg's role in the '70s equal rights movement and attempt, with varying degrees of success, to tell a broader story of women's rights and sexual inequality (the field in which Ginsburg made her reputation first as a lawyer then as a judge). "RBG," while hard to describe as anything short of a hagiography, contains its share of important historical information.

Cohen and West do their best to chart the course of Justice Ginsburg's early life but, hampered by a lack of interview subjects from that era (although the film's subject provides her share of commentary), they paint an incomplete picture. Things improve once they get into the '60s and '70s as Ginsburg becomes a known figure on the national stage. The film is at its strongest when it covers her life under the scrutiny of the TV camera (beginning with her 1993 Senate confirmation hearing, significant portions of which are shown) and has fun with her latest incarnation – that as a queen of memes and real-life liberal superhero wielding the power of the "dissent!"

Even for those who aren't Ginsburg fans or whose philosophies (either legal or moral) are opposed to hers, will find value in the film's exploration of history. It gives perspective to the social conditions that fueled the justice's rise to prominence. It reminds viewers of how strongly the deck was stacked against women as recently as the 1960s and 1970s. (The Court, for example, was a bastion of male power until Sandra Day O'Connor's 1981 confirmation.) "RGB" encapsulates some of the cases Ginsburg took to the Supreme Court during her tenure as a Civil Rights lawyer and allows her, during a 2017 interview, to look back in retrospect.

Nearly every talking head interviewed by Cohen and West provides positive and/or supportive commentary. The lone exception is Ginsburg's ideological opponent, Orrin Hatch, who admits grudging respect during his limited screen time. The only incident for which Ginsburg draws criticism is her scathing 2016 condemnation of then-candidate Trump. Unfortunately, the filmmakers rush through this incident without giving it the same thoughtful treatment accorded to many of the justice's earlier, positive contributions.

In assessing Ginsburg's current role on the Court and how she has become a larger-than-life figure to young, socially liberal voters, "RGB" finds its soundest footing. It shows dozens of memes, talks to several influential under-30 figures, and puzzles over how a tiny, seemingly meek old woman could have become a hero to her granddaughter's generation.

"RBG" isn't worth the time and effort of seeking out in a theater unless you're a die-hard RBG fan." tweet this

"RBG" features an impressive list of interview subjects, including (but not limited to) Bill Clinton, Arthur R. Miller, Gloria Steinem, the aforementioned Hatch, various members of Ginsburg's family (including her children and a granddaughter) and several childhood friends. Numerous TV news clips fill the screen and the film plays audio excerpts from her appearances as a lawyer in front of the Court during the 1970s. With cameras rolling, she's shown (for the first time) the segments from "Saturday Night Live" where Kate McKinnon satirizes her. (She laughs while watching them.)

"RBG" isn't worth the time and effort of seeking out in a theater unless you're a die-hard RBG fan. Little in the film can't be found in Justice Ginsburg's Wikipedia entry; it functions more as a straightforward (and sanitized) biography than a probing or intriguing examination of one of the nation's most influential judicial voices. "RBG's" superficiality makes it good background material about the subject and the forces that guided her life's crusade, but the blinders it willingly wears represent its greatest flaw.