October 31, 2020
comment
For this week's episode of "Bend Don't Break" we talked with Joel Wirtz who is the co-executive director of the Deschutes Defenders, the public defense firm for Deschutes County. We invited Wirtz on the podcast to talk about Measure 110, the proposal on the general election ballot which would decriminalize hard drugs and shift money from state marijuana taxes towards addiction treatment. (Read the Source’s endorsement of Measure 110 here.) 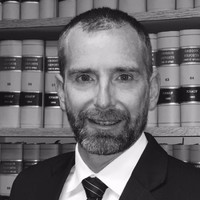 Wirtz explained his work with the Deschutes Defenders: The state assigns the agency two-thirds of all cases involving people who can't afford a defense lawyer as well as children in the foster care system and people hospitalized for mental illness. Wirtz has tried cases from shoplifting to murder, but he told us he's most proud of his work as a defense attorney for Mental Health Court, helping people with a history of trauma, mental illness and addiction.

“These people don’t need to be stuck in the criminal justice system, they need to get treatment. Instead, we’re funneling them into homelessness, back to addiction,” Wirtz said. “Their inability to get a job and their inability to get access to an apartment… we’re sending people into a downward spiral where they're not able to get back on their feet. Measure 110 just does the opposite: it gets them the treatment they need and doesn’t stigmatize them and prevent them from moving forward in life.”

Wirtz pointed out that Oregon ranks at the bottom of U.S. states for access to drug treatment and is challenged at the same time by some of the highest rates of mental illness and addiction. People without insurance—or those who have the Oregon Health Plan—face huge hurdles when it comes to accessing care because Oregon has so few residential treatment beds available, he said. Wirtz explained that among his clients, it was common to see a cycle of hopelessness: The client is ordered into treatment but they can’t get a job and their applications for apartments keep getting rejected and they don’t have the resources to get into a treatment program, he said

“With Measure 110, we’d finally get to see an expansion of funding, close to $75 million over the next year here in the state for drug treatment,” Wirtz said.

We asked Wirtz about the cultural shift over the last five years towards de-stigmatizing mental illness and addiction.

“I think it’s reflective of more people willing to speak about their personal or family experiences and struggles with addiction, from politicians to celebrities,” Wirtz said. “It’s also a reflection of the failure of stigmatization and criminalization. People are tired of spending their hard-earned tax dollars on something that doesn’t get them anything; it doesn’t make us anymore safe; it doesn’t help anybody move forward with their life. It is way less expensive to put someone in treatment than to lock them up and run them through the criminal justice system.”

In the first years of his first term in office, District Attorney John Hummel also saw the ineffectiveness of locking up people who were stuck in a spiral of addiction. (Hummel was a recent guest on “Bend Don’t Break.”) With the support of the community, he started the Goldilocks program which is a three-tiered approach to drug crimes. It attempts to find an intervention that is “just right” for each person, Hummel told the Source during the podcast. This entails providing quick access to treatment and medical care for people in possession of small amounts of drugs, and enhanced prosecutions for full-scale drug dealers.

“When you’re putting a needle in your arm, you’re not worried about going to jail, you’re worrying about whether you’re going to die, and people in that dark of a place, they’re not worried about the police stopping them and putting them in jail. They have much deeper problems… the trauma they’ve undergone in their childhood or they’ve been victimized as teenagers… So luckily [the District Attorney] has an alternative that is a step in the right direction, and with Measure 110, we’d be taking an additional step.”

Wirtz also talked about the success of decriminalization programs in Switzerland and Portugal where the government takes a health-based approach to addiction.

A 2017 study by The New York Times (with statistics from the Portuguese Health Ministry) demonstrated that heroin users in the country dropped from 100,000 people before it was decriminalized in 2001 to about 25,000 users in 2017. Addiction rates have also fallen dramatically as more people access treatment that is funded by the state.

“When it’s not criminal, when you de-stigmatize it, then you make it more likely people are going to go out and seek those services,” Wirtz said.

Property crimes where people are stealing in order to fund a drug addiction have also dropped significantly, according to the study.

We concluded our conversation with Wirtz by asking him what he is seeing out in the community seven months into the pandemic in terms of the mental health and relapse rates of his clients.

“I think this is going to be a hard winter,” he said. “I think there were people struggling somewhat during the spring, but there was some hope. But I’m concerned that we’re in this long haul and numbers will spike and people could lose their jobs over the winter. We need to brace ourselves and really open our hearts and come together as a community because a lot of people are going to be struggling."

Listen to more from Joel Wirtz of the Deschutes Defenders on this week's episode of “Bend Don't Break,” hosted by the Source Weekly’s publisher Aaron Switzer. Every week, Switzer invites on a someone from the community with a new perspective on living through the COVID-19 pandemic including mental health professionals, economists, educators, artists, business people, local leaders and historians. Subscribe on iTunes, Soundcloud or wherever you get your podcasts.