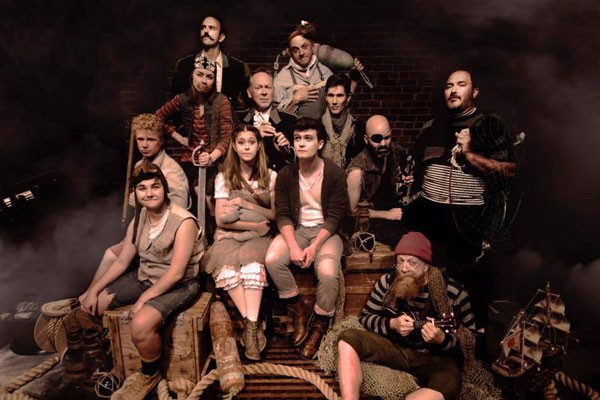 here are so avenues for many types of artists to share their work. Whether it's music, acting or the visual arts, there's always a coffee shop willing to hang your piece or an open mic happening somewhere—both in Bend and around the world. But as a writer, it can be much more difficult to get your work out there, and for playwrights, it can be next to impossible. Taking a chance on an unknown playwright is a massive gamble because there's absolutely no built-in audience, other than the friends the writer has.

Bend's 2nd Street Theater has put the spotlight on local playwrights including Cricket Daniel and Clinton Clark over the last few years, proving that there is indeed an audience for the world premieres of Bendites. Now Cascades Theatrical Company is taking a different tactic by presenting the Cascades 10 Fest, a night of 10-minute plays written and directed by and starring locals.

Event coordinator and producer Brad Thompson explains the initial selection process: "We were trying to help showcase the local writing talent we have here in Bend. Sixteen writers submitted plays (one gave two scripts) and we decided on the eight that filled a nice, well-rounded evening."

One of the short plays, "Trigger," written by Amber Dawn Hanson and Lyryn Cate, was created while the duo weren't even living in the same town. "We wanted to write together but had no story," says Hanson. "When the idea popped into my head, I called Lyryn and we started discussing plot and characters. We came up with an outline for the sequence of events. We each took one character, had the outline, and began writing dialogue as those characters. It was improvisational. We had to create character before we even had words on the page. At this time, Lyryn was still living in Kentucky, getting ready to move back to Oregon. Our story was written completely through Facebook Messenger."

Cricket Daniel also has a short in the festival, although it's quite different from her normal work. "'Con Artist' is dark, gritty and about sexual abuse," says Daniel. "I honestly didn't think CTC would select it, due to content and language. Hats off for CTC doing a play like 'Con Artist.' The idea came to me on a walk. I have no idea what prompted it... I'm a comedy writer. I usually try to come up with realistic plots that have a twist. I don't know anyone who works in law enforcement and have never been a victim myself.

The theatre scene in Bend is growing so fast and there is so much quality work going on, the writers are the next asset that we can tap into. Hopefully, these writers can work these into longer forms, or submit to other festivals or just continue to write great stuff. tweet this
It's eerily timely with the Harvey Weinstein allegations and the #metoo movement. It's a hard subject to tackle and I hope I did my job as a storyteller to shed some light on sexual abuse," Daniel reflects. In his piece, "Visitors," local musician and actor Dave Finch also presents a short look at some very big ideas. "It's about forgiveness, letting go, grieving, loving...it urges people to let go of the shit they might be holding onto. The hard part of grieving and dealing with what wasn't said is that it isn't hard on the dead, it's hard on the living and we have to live with ourselves."

Thomson explains a few of the reasons why the 10 Fest shouldn't just be a one-off event: "The theatre scene in Bend is growing so fast and there is so much quality work going on, the writers are the next asset that we can tap into. Hopefully, these writers can work these into longer forms, or submit to other festivals or just continue to write great stuff. Also, we would like to make it more public that the theaters here do have an interest in original material... 2nd Street has done it for years and I really think that it could and should become a norm in this town."