The Festival of barrel-aged beers, ciders and whiskeys is bringing festive back

Ever since 2009, The Little Woody has celebrated Central Oregon breweries and, more specifically, the beers aged in wooden casks that they produce. Every year except for last year, of course. But, for those who've been vaccinated or can show proof of a negative Coronavirus test result from the previous 48 hours—and aware that masks are mandated while not sipping or noshing—the barrels will be rolled out Friday, Sept. 3 and Saturday, Sept. 4 at the Deschutes Historical Museum. For those who attend Friday but don't get their share of bourbon-aged stouts or wine-aged ciders or rye whiskey-aged, well, whiskeys, they may return the next day provided they have their wristband and tasting glass intact.

This year's lineup features more than 25 makers—19 breweries, two cideries and four distilleries—with the bulk coming from Central Oregon. Bend brewers include Boneyard, Crux, Deschutes, Immersion, Silver Moon, and the only one that already exclusively proffers barrel-aged beers, The Ale Apothecary. Some of the others from around Oregon include Astoria's Fort George, Eugene's Gratitude, Hood River's pFriem, and from Portland, Hopworks. Cider lovers will find Bend Cider Co. and, from Washington, Finn River. Portland's Westward Whiskey, the whiskey tent sponsor, will pour samples alongside Bend's Crater Lake Spirits and from Kentucky, Buffalo Trace.

Why would you even age beer or cider in barrels in the first place?

"Imagine eating a raw apple versus baking it in a pie with sugar and seasonings," says event coordinator Lisa Wood. (And yes, Wood is her real name.) "It changes the flavor, the aroma, the feel and the appearance." But not all barrels are the same. Some of this year's beers are aged in bourbon, while others have been matured in rye or wine casks.

"A charred barrel can add a subtle smokiness," adds Wood. "An oak barrel can impart flavors of coconut while a bourbon barrel can add caramel undertones. Each brew, cider and spirit we're bringing to the festival features its own distinct taste."

Bend's Craft Kitchen and Brewery created barrel-aged Zadira specifically for the event. While some of the beers can be found out in retail locations, such as Deschutes' Black Butte 33, the 12.2% alcohol-by-volume imperial porter aged in bourbon with vanilla and maple, its 6.5% ABV Amburana Bock—aged in Brazilian Amburana wood, imparting notes of cinnamon and coconut, is much harder to come across. Fans of Wild Ride's Laughing Face imperial coconut porter from Redmond may want to wear an eye patch in addition to the now-customary mask, because this 9.5% rum-aged pirate's treasure may shoot your eye out.

For a super fun twist, two of the single-malt whiskeys that Westward will pour went through a secondary maturation; one in stout casks (no doubt received from a brewery that used Westward's spent barrel to age said stout in the first place), and one in Pinot Noir casks.

Wood bills the festival as a sort-of "last hoorah for summer" (the forecast shows it'll be hot, though happily not Heat-Dome hot) and that "Little Woody is almost like a mini Bend: the taps are always flowing and the people are always affable. It's safe to say the stoke level is extremely high across the board (including) for our brewers." 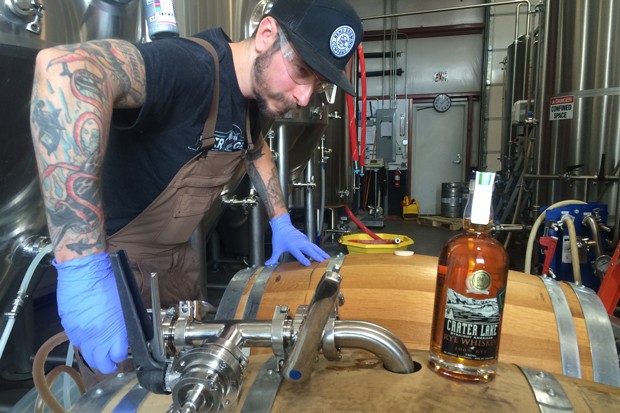 Speaking of stoke and mini, although all ticketholders receive a tasting glass, attendees are encouraged to come in costume, specifically as the Little Woody mascot, a pointy gnome. Goblet glasses will be awarded to the first 200 "gnomies" replete with gnome domes (hat), overalls or dirndl with giant belt, and things like a beard for gentle-gnomes. Bring your wooden pipe if you've got one. Incomplete costumes get you bupkis.

The Little Woody is put on by Lay It Out Events, the sister company of the Source Weekly.