Guardian of the Underdog releases a live version of "Dragonfly"

There are certain things in music that are really magical, and a well-done live recording is one of them. It's great to see and hear the passion that musicians put into their work and the different spin they might put on a song for that performance. 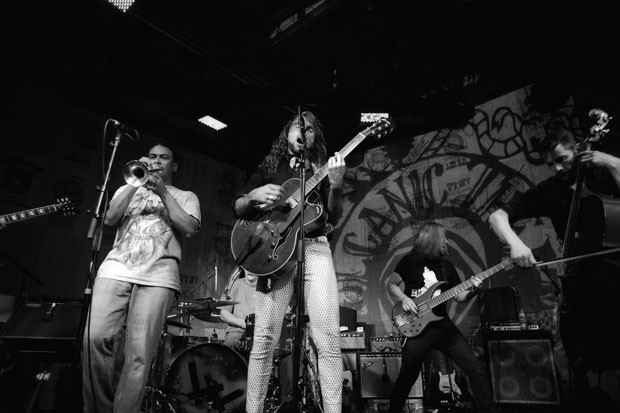 Bend-based band Guardian of the Underdog recently released a live recording video of its song "Dragonfly," shot at Parkway Studios in Bend. For one, the song sounds great. Lead singer Jeshua Marshall crushes the performance as he breathes power into every lyric. Second, there's a really cute puppy jamming with the band—so, that's like a lot of bonus points.

"Dragonfly is a special song to me. It's inspired by the loss of a dear friend. Someone once told me that dragonflies represent the spiritual change that your loved one is experiencing," Marshall told the Source. "When I sat down to write this song, a couple years after my friend passed in car accident, I was strumming the chords that became the foundation of the song and was meditating on my friend. A dragonfly flew right in front of me and just floated there—it inspired me on how to deliver the message of this song and the way it was to be created."

"Dragonfly" is a dreamy and somber rock number that starts mainly acoustic before the rest of the band comes in. Marshall's lyrics tell a hopeful message of appreciating life and reflect on the impact people leave behind on Earth before they pass on.

The song itself was recorded by Scott Oliphant of The Color Study. Oliphant originally reached out to record this song after hearing a performance of it at McMenamins.

"Scott is a super inspiring guy to be around. He has a special vision. It's a blessing to have him in the community. His studio and approach is perfect to get the message of what our band is all about," says Marshall.

This recording puts special spotlight on what Guardian of the Underdog brings to the tables as performers. You can truly feel the emotion as the video plays that Marshall must have felt originally writing "Dragonfly."

"I think a lot of what makes live songs special and different than the studio versions, in my opinion, is that some of the magic of the music is lost in the modern recording process of putting a magnifying glass on every little part of a song, and doing everything in a super sterile track by track kind of way," shares Marshall. "Doing it live gets to the grittiness of what live rock and roll music is all about."