It's not just raining cats and dogs here in Central Oregon

There's no doubt that Bend is a dog town. But did you know that Bend is also home to the largest reptile store in the state of Oregon? Founded and owned by Jeff Jensen, The Reptile Zone has been in operation for 11 years as of January. 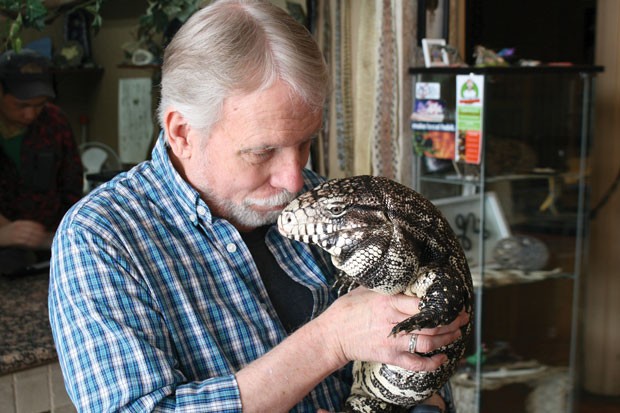 "I started out when I was about 9 with a bullfrog tadpole," Jensen says of his beginnings with critters. "From then on it was nonstop; anything that crawled—whether it was reptilian, furry or feathered."

Throughout middle school and high school, Jensen had his own "Raptor Rehabilitation" program, treating hawks, owls and other flying animals. From there he worked at the San Antonio Zoo, worked with primates for the Southwest Foundation for Research and Education (now called the Southwest Foundation for Biomedical Research and Texas Biomedical Research Institute) before eventually becoming a high school biology teacher. Jensen describes himself as a lover of both the "human kind and animal kind." After leaving his teaching position in Bend, Jensen realized he had a classroom full of reptiles, so he decided to open a pet store.

"It has grown tremendously in the last 15 years. The reptile pet industry has escalated to no end," says Jensen.

Today The Reptile Zone has 50 to 60 species in the shop. Jensen breeds a lot of his own reptiles as a way to ensure customers know what they're getting and that the reptile was bred with proper care. Jensen says a lot of times, stores don't know where the creature really came from or what their line of DNA is.

"Yes, Bend is a dog town, but the more people that have to move into apartments, reptiles make better sense," says Jensen. "They don't take up a lot of space and they're not going to do damage to your apartment."

Those who are worried about not being able to cuddle one of these scaly guys might be misinformed. As Jensen says, some snakes love to be held for a long time and just relax. Some will be more active and move around. It's all about what's most comfortable for the owner and animal.

"You don't have a lot of vet bills, you don't need shots, you don't need all of the things that come with a dog or cat," Jensen says of other advantages to owning a reptile. "The cost of feeding—you could get a full-grown corn snake and it will cost you $6 a month. And that's it."

Reptiles do, in fact, become accustomed to their owners and form bonds. Jensen has around 10 customers who've registered their reptiles as emotional support animals. He said it's a bit of an issue, however, because many restaurants, for example, balk at bringing a snake into the place as a support animal.

While hanging out at his store, Jensen brought out Ryker, an Argentine black and white tegu who's The Reptile Zone's official greeter. These are the largest species of tegu lizard, and also happen to be quite smart.

"I had another tegu before Ryker, Felix, who I could tell to come, to knock it off, and he would listen," Jensen recalls. "They are incredibly smart. Ryker's not quite there yet, but we're working on it."

We'd like to take a moment to remember a unique and visible former Bendite, named Meeko, who has since passed on. Kirk and Sidonie Heppler of The Dough Nut, one of the Source Weekly's Best of Central Oregon winners, reflect on him fondly. "He was such a neat little Bendite and had so many friends, both furry and bipedal, in the community," said Sidonie.

Speaking of The Dough Nut, The Reptile Zone