Llamas are a unique and visible local farm animal. Here's one Central Oregonian's story of raising them for fiber and fun

Terri Holm considers the llamas on her three-and-a-quarter-acre Bend ranch to be more pets than livestock. "I like to say they're somewhere between a cat and a dog," she says, because while they can't exactly cuddle in your lap, they're very social, friendly and loaded with personality. 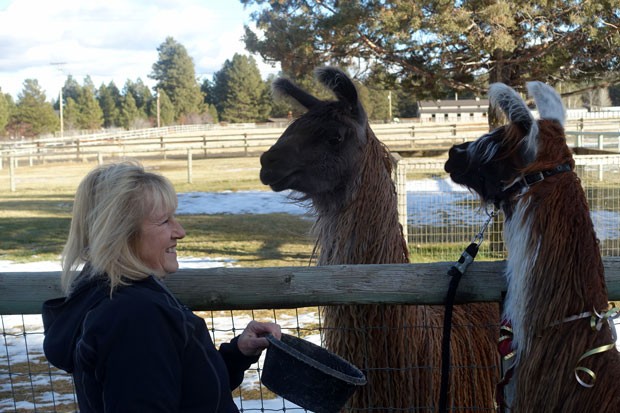 In addition to providing fiber for individual crafters and commercial mills—including Pendleton Woolen Mills of Pendleton, Ore.—the llamas at Ponderosa Pines Llama Ranch participate in a variety of activities. "For five years I led gourmet lunch and llama hikes at Central Oregon Community College," Holm says. "Two of the conditioned pack llamas would carry a table, chairs, food and gear. Everyone would take turns leading them." Her animals have also attended Baby Days at High Desert Ranch in Bend, and Herd Health Days through the Central Oregon Llama Association.

"For many years I hosted the annual COLA Herd Health Day. Members brought their llamas that needed medical attention to see our local vet, and others would attend just to learn more about llamas," Holm said. "Every other year I arrange to have vet tech students and teachers from COCC come out for hands-on experience and educational materials."

Since she started breeding them in 1996, Holm's llamas have won countless awards—both as show animals and for their fiber. The awards don't usually come with cash prizes, but they do influence potential buyers, she says.

Holm says the llamas have inspired her to be more involved in the community and to explore creative projects with llama fiber, including needle felting, wet felting and locker hooking. Holm sells her framed artwork, in addition to items such as felt-wrapped soaps and crocheted hats, scarves and gloves. Llama fiber insoles are a big seller, with their natural ability to cushion, warm and absorb moisture.

"I'm a small hobby farm," Holm says. While other, larger breeders in the area have more volume, she explains, they mainly "breed and sell," while her operation is more diverse – and personal.

"When we first moved to Bend, there was a small llama ranch in the neighborhood. I used to walk our dog up the street and I'd always be greeted by these two little babies. I would talk to them. I ended up acquiring those two, those were my first llamas."

One of her dams, Jori, is due to deliver a baby, or cria, in May. This will be Jori's second cria. Her first, Skorcher, was born last spring.

"Moki is the most friendly," Holm says of her stud llama, who spends most of his time in a pasture separate from the females. Moki has grown accustomed to being haltered and laden with a pack saddle, but that didn't come easy. Holm says she starts training by placing an item, like a halter or a blanket, near the animal each day until it gets used to it, before she starts to even touch them with the item. After that, it still takes some distraction, and maybe a promise of oats, to ease the process.

Vixen is the shy one of the bunch. Only Holm can easily get close to her, and in fact Vixen lets Holm do anything she wants with her, such as putting on a halter or blanket or offering scratches on the back. She'll even let Holm touch her face and neck, something the others are usually skittish about. She's especially timid around anyone else. The females on the property do well together, though they do get jealous when they see one of the herd getting individual attention. "They're very curious," Holm explains. "They are so aware. They know exactly where everyone is."

It's evident immediately upon meeting Holm that talking about and introducing the animals brings her joy. For our interview, Holm showed me how to ask a llama for a kiss, and how to lead them with a halter line. It was so much more than asking questions and taking notes. In fact, any visit to Ponderosa Pines promises to be a welcoming, well-rounded introduction to the world of llamas.