Here are some of the latest tidbits happening in and around Beer Town, USA.


Cascade Lakes Brewing Reopens its Pub with a New Look 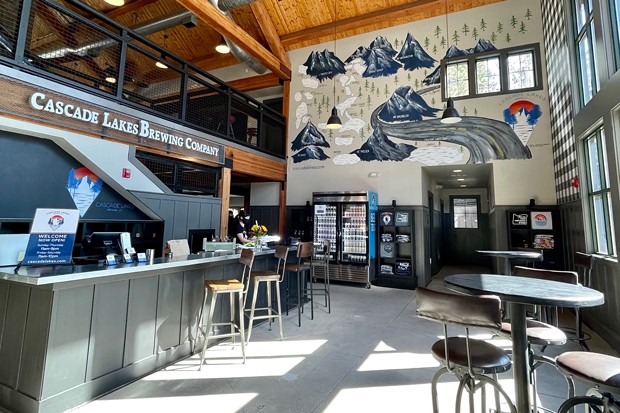 When it comes to apres-ski beer offerings, snow riders don't get much closer to the mountain than the Cascade Lakes Brewpub at the Colorado Avenue/Century Drive roundabout. For the past four months, however, that location has remained closed—until last week.


The Cascade Lakes Brewpub reopened March 19, after a complete overhaul of the décor, changes to its menu and changes to its leadership in the kitchen and brewery. Cascade Lakes hired a new executive chef, Jeff Kelly, who brings a "strong Southern influence" to the new menu, with the help of consultant and owner of Washington Dining & Cocktails Ted Swigert. The menu includes an ever-popular Fried Chicken Sandwich, a Fried Shrimp Po Boy and Shrimp & Grits, among other fare. On the brewery side, heading up operations is Brewmaster Ryan Schmiege, who comes to Cascade Lakes from Deschutes Brewery, where he worked as assistant brewmaster for the past 15 years. Schmiege will work to maintain and improve the current portfolio of beers, while also helping to develop new beers, ciders, seltzers, and non-alcoholic offerings, according to a release from the brewery.

"We've been around since 1994 and we're proud to honor that history while also celebrating the progress, changes, and innovations we have made. We hope to welcome old and new friends to Cascade Lakes Brewing Co. and celebrate the Central Oregon community," said general manager Andy Rhine.

Like other breweries and restaurants in Deschutes County, Cascade Lakes Brewpub is currently open at 50% capacity, per state risk-level guidelines.

Downtown brewery, Bend Brewing Company, has teamed up with Newport Avenue Market for a special beer release aimed at addressing hunger in Central Oregon. The beer, titled "Not Your Usual IPA," is a limited-edition 16-ounce can that came out on March 19. The companies plan to donate $2 from each four-pack sold to the Hunger Prevention Coalition of Central Oregon. The Coalition is a local nonprofit that raises funds for, and distributes nutritious foods such as fruits, vegetables and proteins to distribution points around Central Oregon.


This is the first time the two companies have worked together on a project, bringing Newport Avenue Market's Beer and Wine Manager Robert McCarthy together with brewers at BBC to develop the recipe.

"Robert and the entire Newport Avenue Market team have been huge supporters of BBC, so when the opportunity to come together on a new beer and support a great cause at the same time came about, it was a no-brainer," said BBC Head Brewer Zach Beckwith. "We can't wait to get this beer in front of people."

The beer offers a classic Northwest IPA hop flavor with "juicy" hops. It's available only at Bend Brewing Company and Newport Avenue Market in Bend, and Oliver Lemon's in Sisters and Terrebonne.