Local Businesses are Paying Workers More. But Don't Worry, They'll Pass It On

Average wages are up 17% since the start of the pandemic

Whether you're an employer who's been tasked with filling all those vacant jobs recently or you're a consumer who's been inconvenienced by business closures and delays, most of us have been affected by the pandemic's Great Resignation in one way or another. Labor advocates have been pretty clear about why it's happening and how to fix that particular problem: Pay people more—especially on the low end of the wage spectrum.

In Bend, where home prices exceed what the average working family earning local salaries can afford, wages have long been a source of frustration. Lately, employers have been dangling the carrots of signing bonuses and flexible schedules in order to attract new workers. Employers have also—as those labor leaders have often mentioned—increased wages significantly, according to a Jan. 21 report from Josh Lehner of the Oregon Office of Economic Analysis. 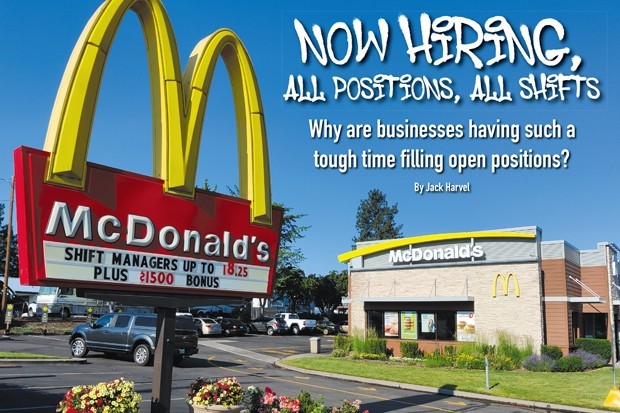 Oregon's unemployment rate is now at 4.1%—still higher than the boom times of 2017-19, but lower than it's been otherwise, and translating into wage gains for workers.

"Average wages are up 17% since the start of the pandemic, and total wages and salaries in the state are 11% above pre-pandemic levels," Lehner wrote. "Our office's forecast for wages has never been stronger, despite a somewhat lower employment outlook tied to the recession and slower population growth." Some workers, attracted by higher pay, will decide it's now worth it to go back to work. Some will weigh the cost of childcare against their now-higher pay and determine it's feasible to re-enter the labor market. With a tight labor market and wages increasing, Lehner expects that the labor market in Oregon will make a full recovery in 2022.

For employers, and for those who have had to wait in a long line at a local business—or have even had to forego their visit due to a temporary staffing closure—seeing people return to work is a positive sign. Still, it comes at a cost that we are already seeing on grocery store shelves and at takeout windows. When a business has to pay workers more to attract and keep them, most will pass that increase on to the customer—and that part, unfortunately, doesn't necessarily come with a rosy outlook, nor a rosy end date.

"Inflation is not costless," Lehner wrote in a Dec. 29 post. "When prices get too high, people stop buying. This feeds back into the production side of the economy. If sales slow, then firms do not need to produce as much, or employ as many workers. Now, this process typically results in slower real growth rather than outright declines. To date the U.S. economy has not reached this point given the strong income growth. However if hot inflation persists, we eventually will."

Economists like to paint a rosy picture and to highlight the statistics that are most likely to feed into that intangible thing called "consumer confidence." And while we see rising wages as a benefit to the people in our community who are most on the margins, those rising wages won't exist in a vacuum.

The next time you sail through the grocery store line but pay $5 for something that was $4 last week, you'll be experiencing both the benefits and the drawbacks of the weird time in history that we are now living through.