Paintings by local artist Paula Bullwinkel spent about one day hung in a local mixed-use building before a complaint prompted the building owner to request they come down. 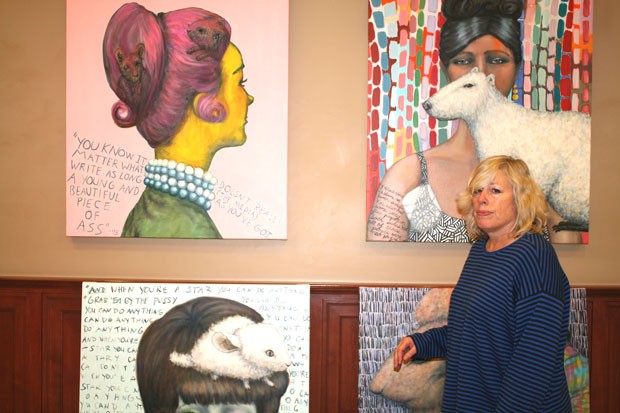 "25%! Americans! Approved!" is Bullwinkel's series of oil paintings, featuring women inspired by beauty ads from the '60s, '70's and '80s, alongside images of rodents and quotes by Donald Trump.

A representative from Northwest Key Property Management, who manages the retail spaces in the building, confirmed that someone had made a complaint, but would not say how many complaints they received in the short time the paintings were hung.

Bullwinkel says the object of the complaints were three words in the quotes from the president, specifically, "pussy," "ass" and "shithole." The quotes are placed in different areas in each painting, with the largest of the words being approximately 1 inch high. Bullwinkel says there was concern that children may see the words when in Franklin Crossing.

"It was the words that were (considered) offensive, because the paintings without the quotes are just my typical imagery of women and girls and animals frolicking," explains Bullwinkel, who said the paintings are a result of the anger she was feeling after the 2016 election. Feeling the words of the president were brutal enough, Bullwinkel wanted to juxtapose them with more subtle and soft imagery.

"I don't want to create ugly imagery, because it's too hard to look at. I want to be more subtle so people will look at it a little longer and let the words be the ugly part."

This is not the first exhibition of this particular series. Last October, the series was on display at the Pence Pinckney Gallery at Central Oregon Community College as part of a faculty exhibition. According to Professor of Art Bill Hoppe, who oversees exhibitors in the gallery, the paintings were well received and yielded no complaints. "People looked and they read. No one was upset in any way. (This work) was a sort of confirmation of what is going on in our world," shared Hoppe.

After taking the paintings down, Bullwinkel hung them at Bright Place Gallery for the weekend and hopes to find another home for them soon. Bullwinkel says, "I love to see it had a reaction. I thought they may be vandalized. Often with my political work, I don't get any reaction. But when there is a reaction, I know they have had an impact."

Other paintings by Bullwinkel are currently on display at At Liberty as part of the "Figuratively Speaking" group exhibition.