Local Tween Baker is Back

January 29, 2020
comment
On the previous episode of “Kids Baking Championship” young bakers were challenged to turn a regular dessert into a Neapolitan dessert by including chocolate, vanilla and strawberry. Due to overly sweet Neapolitan sandwich cookies, Sahana was sent home. 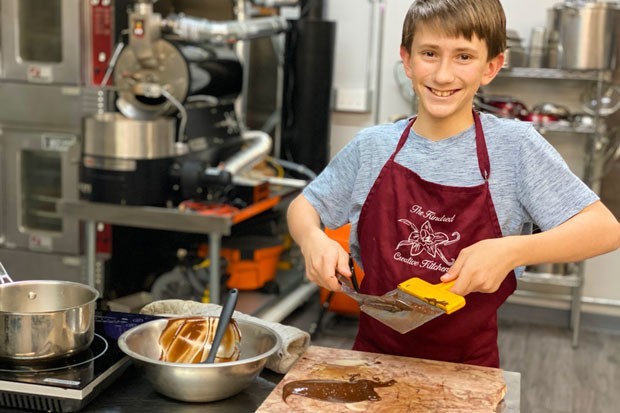 Episode three begins with Celebrity Pastry Chef Duff Goldman in front of a deli slicer, cutting what appears to be meat. Kid contestants look slightly horrified by the thought of making a dessert with meat, but Duff and his co-host—actress and Celebrity Chef Valerie Bertinelli—set them at ease when they announce they’ll be making dessert imposter sandwiches.

The group is excited; every season includes an imposter challenge. It’s a free for all to select the sandwich they will be recreating as a dessert in two hours and there is a mad rush to the sandwich board.

The kids settle into their stations and get baking. Choux pastry is chosen by many of them: the light pastry dough looks like sandwich bread and they’ll be using steam to puff the pastry. Early on, Elise burns her choux pastry but Duff throws her a tip and she starts over.

Saleem goes a different route and makes a pound cake to mimic buttery brioche. As he’s working, he turns to Bend native Reggie Strom and asks, “My recipe said to add one egg at a time but I accidentally did two, do you think that’s a big deal?”

Reggie responds quickly with, “no.”

Saleem comes back with another question, “I guess there is no leavener in pound cake?”

This time, Reggie appears a little annoyed and responds, “Apparently in yours there isn’t.”

The questions keep coming and Saleem asks Reggie, “do you think I need to start over with my egg if my butter separated?”

Reggie offers another short response: “think about it.”

The show pans to an interview with Reggie where he tells the audience how he’s feeling.

“It’s a competition but at a point you just have to figure it out for yourself,” Reggie says.

The sequence of scenes leaves us knowing that the other bakers trust Reggie’s baking skills and see him as a top competitor.

Pastrami on rye is the sandwich Reggie needs to mimic. His plan is to make an orange and lemon pound cake for the rye, choosing his flavors because he remembers judge Bertinelli is a citrus fan. Lemon curd is his choice for the mustard, but this is a risk because he had to throw away his lime curd on the first episode. It doesn’t deter him from making curd again. Cooking it for longer avoids disaster. To recreate the thin layers of pastrami, Reggie chooses to make pink hued crêpes with a technique so unique Duff takes notice. After dipping the bottom of a sauté pan into crêpe batter, Reggie turns the pan upside down to cook over the stove.

“I like it because it cooks faster,” Reggie explains to Duff.

The crêpe falls off the pan, flopping like hot pastrami.

A pan of brittle lights up in flames and Naima’s eyes widen. “Oops,” she exclaims and hides her face in her shirt. It takes her two attempts at a brittle to use as a Reuben.
Every episode includes a twist and this time the bakers are asked to make a side dish of dill pickles, coleslaw, potato salad, cucumber salad or a fruit cup for their imposter sandwiches.

Before time is up, Saleem has trouble thickening his pastry cream. Reggie lets him know he should try something else because he knows it won’t thicken in time. Unfortunately, this still sends Saleem to the bottom, alongside Elise who never got over her pâte à choux troubles.

Reggie’s pastrami on rye imposter sandwich is impressive and the judges notice. Duff says it’s the best shaped meat product they’ve ever had and Bertinelli is equally impressed. It seems like Reggie could be on the top but he’s pushed out by Grayson’s BLT with potato salad and Abner’s Philly cheese steak with coleslaw.

In the end, Elise is sent home for her dried out pâte à choux with the texture of a fortune cookie.

Llama’s are the new unicorns next week with the “Llama Drama” cupcake challenge.