Throughout the pandemic, many businesses have suffered—but there was at least one bright spot in the culinary scene: tomatoes. If you grew them, chances are they grew. And grew. And kept growing. In Central Oregon, tomato crops defied all odds and had a booming year—a blessing and a curse for at least one local farm.

Well Rooted, a U-pick farm in Tumalo, experienced an abundant crop of about 11,000 tomatoes this year, but had few businesses to distribute to. The farm ended up selling or donating just 10 to 15% of its crop.

"We had the idea that if we grew a lot, we would sell a lot," said Well Rooted owner Janelle Maricle. "We had two big businesses on board to buy a bunch of our product, but when COVID hit, restaurants, schools and stores were struggling and there was no longer a high demand for produce."

In addition to local businesses, Well Rooted had hoped to tap into the commercial industry. The farm had been discouraged by commercial brokers who told them that smaller farms could rarely generate large enough crops to distribute in larger markets. While Well Rooted's booming crop proved sufficient at meeting the industry's demands, there were unexpected challenges that hindered success, its owners said.

"We still have a lot to learn about picking, packaging and varieties of tomatoes to get into the commercial market," said Well Rooted Lead Grower Scott Maricle. "When people go to the grocery store and pay $3-4 a pound for tomatoes, they expect perfect-looking tomatoes. To put out those types of tomatoes, you have to pick them green and plant the right variety that can survive shipping."

Scott Maricle's struggle was not unpredictable. Tapping into the wholesale industry is a common challenge for small farms. At Oregon State University's Extension service, Clare Sullivan, Small Farms and Specialty Crops Extension Agent for Central Oregon, admits that wholesale is a risky business.

"It is a big struggle to try to get into the wholesale market. It's sort of a chicken-and-egg thing. If you haven't been supplying products in the area, a grocery store will be hesitant to buy from you because they've never seen your product," said Sullivan. "The advice we give is to try to get contacts and make some sort of arrangement ahead of time before going whole hog into the commercial industry. Sellers should find out what the buyer is looking for in regards to quality and price point before you plant."

“I don’t feel like the crop went to waste because it was a huge learning experience,” —Janelle Maricle tweet this

Well Rooted hopes to eventually adapt to these challenges and penetrate the commercial market, but they aren't about to sacrifice quality.

"Grocery stores sell perfect looking tomatoes that taste like cardboard; I'm about growing high-nutrient-dense food that tastes wonderful. The consumer is conditioned to the commercial experience, so it isn't easy to break into that market, be different and succeed," said Scott Maricle.

Despite failed business ventures on the commercial scale, the abundant crop paid off in areas of good will hunting. Thanks to a decrease in demand and increase in supply, Well Rooted was able to be generous with customers.

"People would come to the farm with $20 or $30 to spend on tomatoes and leave with a bit extra product," said Scott Maricle. "I don't think that it hurt the business. I had such a large crop that I could afford to be generous. It actually built our sales because customers spread the word of our crop."

Janelle Maricle hypothesized that although there was a decline in demand, the pandemic ultimately helped the U-pick business.

"In some ways, COVID was more of a friend to people that sold produce. People feel safer going to an outdoor garden rather than an enclosed store for their produce, so U-pick farms were a super-profitable business this year," she said. 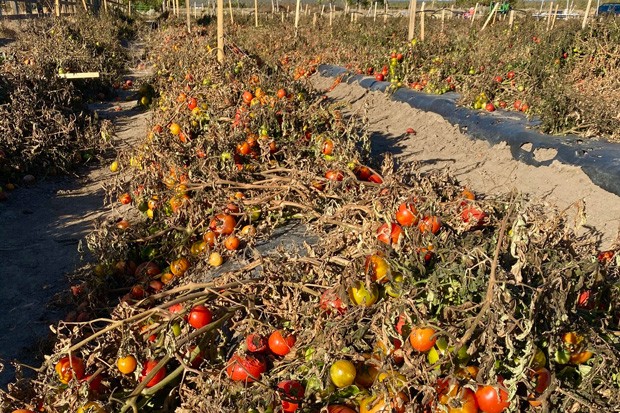 In addition to customer turnout, the crop provided incredible opportunities for donations. The crew sent tomatoes to food shelters, churches, families who lost their homes to wildfires and High Desert Food and Farm Alliance—though the process was hindered a bit by a shortage of helpers.

"We only donated about 700 pounds because the organizations that were going to pick them didn't have the capacity or enough pickers. They came in for a day and picked what they could," said Scott Maricle.

U-Pick and donation measures combined were no match for the monster crop at Well Rooted farm. Sullivan of OSU Extension hypothesizes that this was largely due to lack of customer diversity.

"The farm wasn't selling to farmers markets, they weren't doing CSA (community supported agriculture)—so their customer base was skewed in one direction, which unfortunately was the least reliable with COVID," said Sullivan.

"I don't feel like the crop went to waste because it was a huge learning experience," Janelle Maricle said. "Thanks to this year's crop, we have leads to companies that will buy tomatoes next season, and customers from this year who are looking to purchase more next year. We're not going to plant as much next year but we're definitely going to keep our product at a high number."

Related Can Do!: If this seemingly endless pandemic has you thinking more about self-sufficiency, let the advice from local homesteaders, gardeners—and even preppers—get you inspired

Can Do!
If this seemingly endless pandemic has you thinking more about self-sufficiency, let the advice from local homesteaders, gardeners—and even preppers—get you inspired
By Nicole Vulcan
Local News

Jess McComb is an intern at the Source Weekly but she'd like to pretend she's a full time employee. Her current occupation is high school but she prefers the title 'journalist.' Hobbies include: being the best female skier on the Mountain, color coordinating outfits, obsessively working out and bragging about...
More