...who still loves his job

If one sits at the bar and watches Eric Monsen work, he makes it look easy. Even as he breaks a sweat, gliding to and fro among co-workers—often much younger, he deals out smiles, greetings, handshakes and fist bumps. He says his number-one goal is to make everyone who comes through the door feel comfortable. 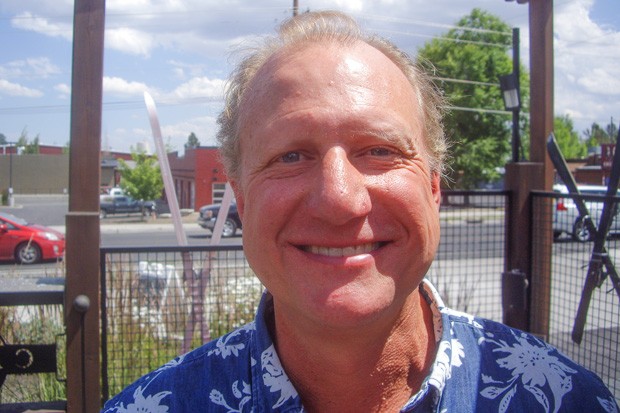 "It's almost like we're playing a game at work," he says, describing the choreography behind the bar.

But when approached with a request for an interview, the longtime Bend Brewing Company bartender responded in his usual modest fashion: "Why? I sling beers," he answered, with his broad smile.

He's been at it for the past 18 years and says he still looks forward to going to work every day. "It's a real family atmosphere. There's a lot of love, and it's a tight-knit group. It's a great place to be," Monsen says.

BBC is Bend's second-oldest brewery, opened in 1995. In 1998, Monsen applied for a prep cook job, which he did for about three years. Monsen admits he's a "people person" and decided that he should be behind the bar. He's been there ever since. During that time, BBC has had two award-winning head brewers hired away.

And then the brewery changed ownership nearly four years ago. After the initial shock, Monsen says the change turned out to be a "best-case scenario." He says the new owners are "awesome people" who bought the long-barren empty lot next door, allowing BBC to expand toward the Deschutes River. "They came in with respect and were kind and listened to everyone and made all the right changes and so many improvements," Monsen says. "I still love it. There's a culture there. It has a lot of soul, and I want to maintain that. It's just really cool. I've seen a lot of change in this time, but the one thing that has remained consistent is that we still make really good beer."

Monsen says he used to be an IPA guy, but these days he prefers a hoppy pale ale. Still, some habits are hard to break. BBC's own Tropic Pines Juicy IPA "is my favorite beer in town," he adds.

Monsen says the people he's met and the friendships he's made over the years keep him happily coming into work five days a week. That doesn't mean there are no trying times, he readily admits, like when there's "100 glasses that need to be washed, customers are backed up to the door, and everyone wants their beer NOW," he says. Monsen is equally friendly to loyal locals and impatient tourists alike. "Your day is not going to ruin my day. I'm still going to do my best."

BBC becomes his "happy place" when he gets to crank up the tunes and the bar's huge picture windows open up to utopian river views, creating a "soulful vibe," he adds.

How many customers' names has he memorized over the years? Too many to remember.

Monsen was born in Coos Bay, Oregon, but grew up in the San Francisco Bay area. He was a recreation and tourism management major at the University of Oregon when he landed an internship at Mt. Bachelor. That was 1992, when he says the population was 24,000. The work hours infringed on his love of skiing, which he started at the age of 5. Monsen says he likes the flexibility of his current job, which allowed him to ski 50 days this past season.

Whenever he travels, Monsen says he's always ready to return to Central Oregon's clean air and good-tasting water. "I love this place. I freaking love it. I get to live in a great place. Life is good."

To cap things off, I asked the ludicrous question of how many pints he thinks he's poured over the years. Monsen whipped his phone into calculator mode and came up with an estimate: Two and a half million beers.