There've been improvements, but more work's ahead 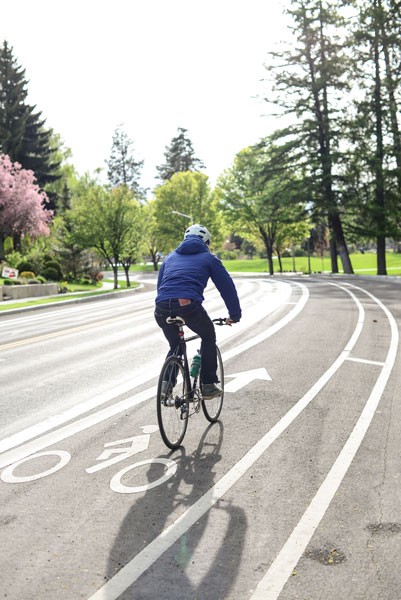 Although Bend claims Bike Town, USA, as its title, it is not for bike safety. In that regard, it has lagged behind no fewer than five other Oregon cities, only earning recognition as a Bronze Bicycle Friendly Community by the League of American Bicyclists. But last year, the City of Bend moved forward and ratcheted up to a Silver designation. Robin Lewis, a transportation engineer with Bend, assures that the city is hard at work, trying to mature even further and toward a gold designation.

A big step forward came last October when the city completed the Riverside Boulevard Bike/Pedestrian Project. Most noticeable from that project was a wide-reaching effort to better designate road space for cyclists—namely, the green painted lanes and boxes that were rolled out over the course of last summer, and intended to separate cars from cyclists on the right side of the road.

But even if some riders find the new space to ride a welcome addition, others still see a need for more infrastructure changes.

"Certain places where they've made improvements, it's a lot better," Bend Bike's Ross Winsor said about the lanes' installation. "Overall, it still needs a lot of improvement...A lot of it's just painted lanes—it doesn't put much separation between you and cars."

He also points out that with studded tires being pervasive here, the paint's likely to get worn off.

Winsor and his girlfriend, Alice Drobna, moved to Bend from Salt Lake City in 2010 and said they virtually live on their bikes—going so far as to pare down from two to one car. The couple agrees that they're each lucky to work in close proximity to their home, making the commute an easy ride. But avoiding heavily trafficked roads, they said, is still the ideal way to get around town, despite installation of those painted lanes.

"The city's said it wants to improve things and get more people on bikes, which is great," Winsor said. "If you build better infrastructure, people will use it," he said, going on to add he'd much prefer protected lanes—spaces where cyclists are separated from traffic by a barrier, like a median.

The closest the city's gotten to that kind of buffer is downtown at the corner of NW Riverside Boulevard and NW Wall St. A bike lane's bordered by the curb on one side and on-street parking on the other, with vehicle traffic beyond that. Even if that bike lane is nestled in there and separated from traffic, the possibility of running into an opened car door when someone's trying to get out of their vehicle remains. If a rider's able to avoid that sort of run-in, though, the bike lane just disappears farther down, after becoming NW Franklin Ave, turning into a shared lane with traffic.

"When we moved here, we were super excited," Drobna said. "As we got involved in the whole process, we were like, 'This could be better.' Overall, I still wouldn't live anywhere else."

She does point out that Bend has reached the point where it now offers safer riding than a lot of other places in the country. The green bike lanes and other infrastructure just haven't been perfected—yet.