In December 2020 Bend La Pine Schools implemented a 50% "grading floor" for middle and high schools as students struggled to accommodate to distance learning models. The policy meant students could score no less than 50%, even if they didn't complete any work. The following spring the school district formed a task force of teachers and administrators to assess grading practices. The policy could become permanent, following a determination by the Superintendent's office, but many teachers aren't enthusiastic about it. 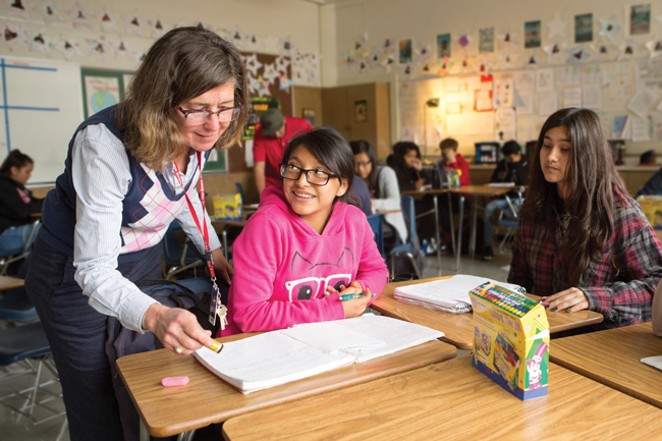 An anonymous group of over 100 teachers signed onto a letter sent to BLPS leaders asking them to end the 50% grading floor, saying it contributed to student absenteeism and fewer students turning in assignments. An organizer said the number of signatories rose to over 150 since the mail was sent.

"We understand our goal of equity to meet each student's diverse learning needs.  In a misguided attempt to achieve equity, this policy has masked the challenges struggling students face, not addressed their needs," the letter said.

The policy is one of many that the task force recommended, and others, such as de-emphasis of homework and strict deadlines, have been less controversial. Proponents of the grading floor argue grading can often be arbitrary, especially for subjects outside of STEM where there's no single correct answer. It's also argued that traditional grading scales create an unnecessarily high barrier for students to rebound from one failure.

"Something that we have to consider is our students and their engagement in our classes, and we need to give them avenues and pathways to feel engaged and connected," said Stephen Duval, director of college and career readiness at BLPS. "The research was loud and clear for us, that when we give students low marks that are almost unrecoverable, that it doesn't actually motivate them to do better, it pushes them further away."

“This is not in alignment with where I would want students in a first-year composition class at COCC or OSU or U of O. It’s not what I would want them to get accustomed to.”—Colin Price tweet this

"Within our high schools Bend High, Mountain View High, Caldera High all have teachers that are using a non-100-point system now," Duval said.

But some classes such as Advanced Placement, International Baccalaureate and dual-credit classes must remain on a traditional grading system. Switching over to an alternative grading system is much trickier when having to adhere to broader systems.

"The mathematical justification does make a certain amount of sense," said Colin Price, who teaches a dual-credit English class at Summit High School, and who signed the letter to school leaders. "What it underscores is that the 100-point scale is kind of busted to begin with, but it's, I think, having to recognize that this fix is kind of equally broken."

Since the rule went into place Price said he's seen in increase in students coasting through work, doing as little possible to maintain a decent grade. Students can calculate the scores they need to get to maintain grades through BLPS online learning management system, which Price said led to many conversations with students who openly gamed the 50% floor.

"With this rule in place, I had students who didn't turn in this Capstone research paper (40% of the overall grade), and still were able to pull out a B. I don't know how this has happened like this, and it does not feel good to me," Price said. "This is not in alignment with where I would want students in a first-year composition class at COCC or OSU or U of O. It's not what I would want them to get accustomed to."

Some teachers do prefer the system, saying it allows students a path toward success after failing, that it makes teachers communicate solutions to students and allows more creativity in forming lessons.

"I honestly feel like the simplification of these standards allows me to be more creative in challenging my higher learners; I don't think it at all lowers the standard of how to create challenging learning opportunities," said Katie Lyons, a teacher at Cascade Middle School.

The policy is still considered temporary, and any future determination will have to come from the Superintendent's office.