Ray LaMontagne kicks off the season at the Schwab, with special guest Neko Case 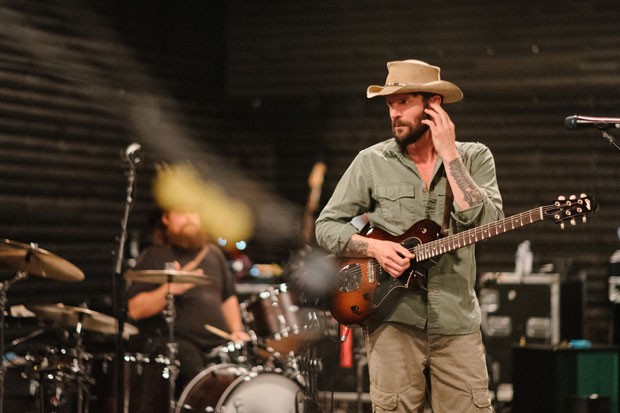 Pretension, flash and lack of substance seem to be the calling card for so much of what passes for musical talent nowadays.

If this is what you might come to expect from Ray LaMontagne, look elsewhere. Ever since he burst on the scene with his 2004 debut, "Trouble," the soft-spoken singer-songwriter has carved out an admirable career over a span of seven albums that includes the recently released "Part of the Light."

Possessing a raspy tenor, LaMontagne has crafted a sound that evokes the spirit of The Band and 1970s-era Van Morrison. Over time, he's applied more of a psychedelic nuance to his material, while working with a number of sympathetic producers including Ethan Johns, Dan Auerbach of the Black Keys and Jim James of My Morning Jacket. Having first taken the production helm for his fourth studio outing, 2010's "God Willin' & the Creek Don't Rise," LaMontagne has done the same for this most recent collection of songs. And like he did for "God Willin'...," the New Hampshire native chose to record at The Big Room at Apple Hill, the studio he built for himself at his 130-acre farm in Ashfield, Mass. The decision was a no-brainer for him.

"I just wanted to really do it here. I have a studio here at the farm and it's just a beautiful place to be. I just thought I'd do it here this time. I'd bring people here out to my place," he said. "It's pretty nice to be able to wake up in the morning, make a cup of coffee and walk into the studio. It's very cozy and it's always nice to be able to sleep in your own bed."

LaMontagne's recording approach is less about technical wizardry and more about working with friends whose work he enjoys and respects. It's a big part of what went into this recording process that took place over the span of a couple of 10-day sessions last year. Not unlike his prior work, the ambiance and warmth he's become known for can be traced to this creative approach. Among the people who helped him with the heavy lifting this time out are musicians with whom he's developed camaraderie, including members of My Morning Jacket.


"I'm a very private person, so going out there is, in some ways, the hardest thing for me." —Ray LaMontagne tweet this

"[This experience] was really just about getting my friends together—people that I can communicate with very easily and whose music and talents I admire," he said. "Dave Givan wound up playing drums on "Ouroboros" (LaMontagne's 2016 album) and I really love the way he plays. So I wanted to get him out here. Seth Kauffman has played on (2014's) "Supernova," "Ouroboros" and now, this record. So he's been on three records. I had just done a tour with Carl Broemel of My Morning Jacket for "Ouroboros "and I wanted to try and get him up here— and Bo Koster from My Morning Jacket as well. Kevin Ratterman engineered "Ouroboros" and we became really good friends. I just really love that guy and I wanted to get him up here."

LaMontagne's back story is quite the unusual one, as the oft-told tale is that he quit his job at a shoe factory in Lewiston, Maine after waking up to his alarm clock radio playing Stephen Stills' "Treetop Flyer." While the details remain hazy to him, LaMontagne does remember buying his first guitar around that time ("I got a Fender acoustic guitar from a pawnshop in Lewiston, Maine. It nearly killed me because it was so hard to play.")

As the epitome of an artist who would rather let his music speak for him, LaMontagne is getting ready to do just that as he gears up for a tour with Neko Case, despite the idea that going on stage runs counter to the privacy he cherishes.

"I'm a very private person, so going out there is, in some ways, the hardest thing for me," he admitted. "But there are people who want to hear this music and I'm very grateful for that. I'm very grateful that they've stuck with me and buy the albums. And the live audience continues to grow, which amazes me. It seems like tickets are sold every couple of years when I go out and it just continues to grow slow and steady. I've really kind of built this one show at a time—and I feel like that's what I'm still doing."

That said, LaMontagne is excited about this current string of dates—including his upcoming performance at Les Schwab Amphitheater—especially given the visual aesthetics that he's eager to share with his fans.

"We're obviously touring a new record, so we're going to be playing a lot of new songs. It will be a beautiful show. The set and lighting design is just gorgeous. A lot of effort went into that with a fellow named Jeremy Roth from Seattle," he said excitedly. "He's just an amazing lighting designer, so we have a beautiful analog set. It's really nice. No LEDs—it's gorgeous. It's worth it just for that. I would tell people to come, sit back, watch the show and enjoy it. It's going to be as beautiful to look at as well as listen to."