Wirkkala, who was found guilty of murder in 2014, is back in the courtroom and arguing he acted in self-defense

Luke Wirkkala is back on trial in Deschutes County, over eight years after shooting his houseguest, David Ryder, on Feb. 4, 2013. The jury will again be tasked with deciding if Wirkkala, now 40, acted in self-defense when killing Ryder, who was 31 at the time.

In his first trial in 2014, Wirkkala was sentenced to life in prison with at least 25 years before parole. But the Oregon Court of Appeals overturned this decision and ordered a new trial in 2018, after determining that police should have stopped questioning Wirkkala when he asked for a lawyer. The trial has been delayed for several months due to COVID-19 and finally began on March 18 in a temporary courtroom at the Deschutes County Fairgrounds. 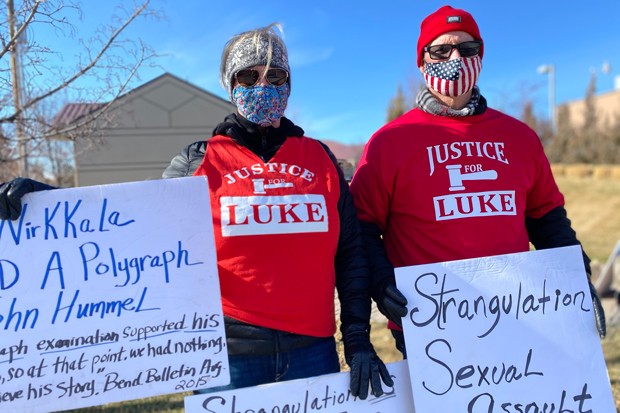 Even though the Court of Appeals didn't challenge the facts of the case, the trial will revisit these facts and bring new witnesses to the stand. Much of the case is undisputed: Ryder and Wirkkala had both moved to Bend in 2012 and met at a campground while looking for more permanent housing. Ryder, a Kentucky native, was working as a software engineer at G5 in Bend, while Wirkkala, who grew up in Astoria, had moved to Bend to work as a freelance photographer and writer.

After hanging out a few times, Wirkkala invited Ryder to watch the Super Bowl at Hideaway Tavern. The two returned for a nightcap at Wirkkala's home, where Wirkkala shot Ryder in the neck. Wirkkala's then-girlfriend Rachel Rasmussen and her 11-year-old son and 16-year-old nephew were also home, but didn't witness the events directly.

Wirkkala and his family and friends have long been adamant that he acted in self-defense, starting a "Free Luke Wirkkala" campaign and holding protests around Deschutes County. They argue that, prior to firing the shotgun, Ryder physically and sexually assaulted Wirkkala, and he acted to defend himself, as well as his home and family.

Steven McConnell, Wirkkala's brother-in-law and a character witness in the trial, has helped lead the campaign to get Wirkkala out of jail.

"We've tried everything," he said. "I just hope the end result is that his actions are justifiable and, at the end of the day, Luke (Wirkkala) is found not guilty."

Prosecutors, on the other hand, plan to argue that the sexual interaction—which is documented with evidence—could have been consensual.

"The only two people who know exactly what happened are the defendant and David Ryder," prosecutor Jayme Kimberly said in her opening statement on March 18. Both Kimberly and fellow prosecutor Kristen Hoffmeyer work for the Oregon Department of Justice, which took control of the case at the request of Deschutes County District Attorney John Hummel. He cited a bar complaint Wirkkala made alleging prosecutorial misconduct in the first case, as well as a potential conflict of interest related to a cousin of Wirkkala's sending allegedly disturbing letters to Hummel's office.

Wirkkala is being defended by Thad Betz, as well as Joel Wirtz of Deschutes Defenders, which has represented local defendants including Edwin Lara, the killer of Central Oregon Community College student Kaylee Anne Sawyer. The defense argues that, after a night of drinking, Wirkkala fell asleep at his home and awoke to Ryder forcing him to perform oral sex and strangling him. In a 2018 lie detector test, Wirkkala confirmed that Ryder physically assaulted him, which he defined as placing hands around his throat and forcing his head down, as well as punching, hitting, kicking, biting and scratching.

Wirkkala says he proceeded to break free from Ryder, run to his room and get his shotgun. He says he fired a round as a warning, but when Ryder continued to advance, he shot him at close proximity in the neck, killing him instantly. Wirkkala confirmed in the lie detector test that Ryder was advancing towards him when he shot and, in a letter to the Source Weekly, he said he fired the gun as a "last resort."

Rasmussen, who had been in the neighboring room, was the one to call the police, who arrived to find Wirkkala crying on the floor near Ryder's body. They found shotgun shells on the floor and empty beer cans strewn about. Both Wirkkala and Ryder were found to be legally drunk, with Wirkkala's blood-alcohol level between 0.18% and 0.38% at the time of the shooting and Ryder's at about 0.23%.

Officers found "fingernail scratch marks" on Wirkkala's neck and abrasions on his hand. In the retrial, Wirkkala's defense will present evidence of his DNA under Ryder's fingernails, as well as evidence of the sexual activity. Prosecutors will argue that Wirkkala acted with intention, as he went to his room, grabbed his shotgun and returned to shoot Ryder. In the previous trial, prosecutor Mary Anderson argued that the marks on Wirkkala's neck could have been from "rough sex" or have been self-inflicted. She argued that Wirkkala could have been the one to come onto Ryder, and he could have become angry if Ryder rejected his sexual advances. The prosecution pointed toward Wirkkala's history as a journalist as evidence that he's "someone who composes" and "works things through." They also showed the jury the video of Wirkkala's first interrogation where he used aggressive language against detectives after he was not granted a lawyer.

Midway through the interrogation, Wirkkala told the detectives, "I appreciate the hospitality here, fellas, but I think I'm going to get a lawyer." They kept talking anyway, and Wirkkala swore numerous times at Bend Detective Tim Knea. The Oregon Court of Appeals ruled in 2018 that Knea should have stopped questioning Wirkkala at that point, and since this recording was the state's only evidence of Wirkkala being hostile toward police, it could have affected the trial's results.

Rasmussen, now Wirkkala's ex-wife, testified last week that she is supportive of Wirkkala in the case.

"I believe he was sexually assaulted that night, and I thank him for protecting our family," she said. The defense had hoped to show evidence of Ryder's "prior bad acts," which were excluded from the first trial. They specifically aimed to show the jury that Ryder was kicked out of the Navy in 2004 for drinking, with reports of sexually aggressive behavior. But, according to McConnell, the judge is currently preventing the defense from detailing these prior bad acts in court. He said the defense can only bring them up to argue against specifics statements the prosecution makes about Ryder.

Ryder's family didn't respond to requests for comment by press time, but in a 2018 statement to The Bulletin, Neda Calhoun, Ryder's mother, wrote that Wirkkala "deserves to rot in prison."

"My son gets no more chances at anything because his life was stolen from him and his family," Calhoun added.

Wirkkala's family argues that he is also a victim in the case. According to McConnell, Wirkkala's brother-in-law, the events have been traumatizing for their family, along with Ryder's. Ryder's family had hoped the prosecutors wouldn't settle the case before the retrial. According to Wirkkala's letter to the Source, prosecutors did offer him a settlement for manslaughter, instead of murder, where he could have left prison in less than two years from now.

"I turned them down because this isn't just about getting back my freedom," he wrote. "It's also about justice, and standing up for what is right, and restoring my good name. I do not intend to stop fighting here for justice until the fight is done."