Move over turkey and ham: andouille sausage has arrived for the season! For those dreading the typical holiday meal this year, why not mix it up with a nod to the original city of celebrations, New Orleans? Think Mardi Gras and the annual Running of the Santas. Jambalaya is a dish synonymous with "The Crescent City" with roots in Spanish, French and West African cuisine.

While the jambalaya ingredient list is rather long, it's simple fare with chopping and stirring the only techniques required. The rice cooks in the dish, making it no fuss. Classic Creole recipes call for tomatoes, while rural Cajun recipes don't, so adding tomatoes is optional here. Cornbread is the traditional "side."

Jambalaya for a Crowd

Season the chicken with 2 tablespoons Creole seasoning. Heat the oil in a heavy pot over medium-high heat. Add the chicken, searing for a few minutes on both sides until lightly browned. Set aside.

Brown the sausage in the pot. Add the onions, peppers, celery, salt, cayenne and black pepper. Cook, stirring often, until the veggies are softened. Add the tomatoes, garlic, and bay leaves. Cook and stir until the tomatoes release some juice. Stir in the rice.

Add the thyme, broth and chicken. Bring to a boil. Reduce the heat to medium-low, cover, and simmer, stirring occasionally, until the rice is done, about 30 minutes. Season the shrimp with the remaining Creole seasoning. Add the shrimp to the pot and cook until they turn pink, about 5 minutes. Remove from heat, cover, and let sit for at least 15 minutes.

Stir in the green onions and parsley. Remove the bay leaves. Taste and add more seasonings if desired. Serve directly from pot. Serves 10-12.

*Creole seasoning is a blend of peppers, spices and herbs. There are homemade recipes galore online or find at the supermarket. 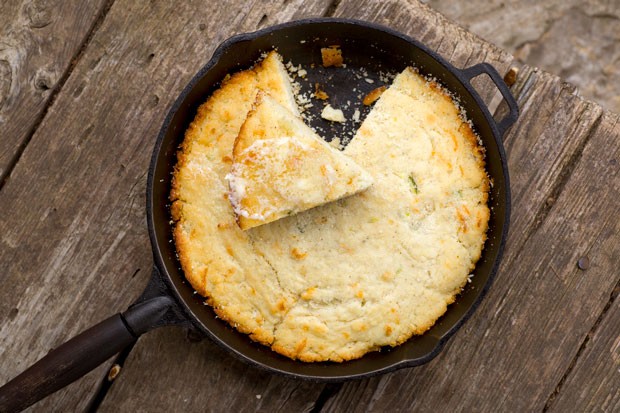 Whisk the cornmeal, flour, baking powder and salt together in a large bowl. Cut in ½ cup shortening until small clumps form. Mix in the buttermilk, egg and oil until combined. Fold in the onions, jalapenos and cheese.

Place the remaining shortening in a medium-size cast iron skillet or an 8x11-inch baking pan. Place the skillet in the oven for several minutes, until the shortening bubbles. Remove the skillet from oven and slowly pour the batter into the skillet. Bake for 30 minutes or until the top is golden brown and a toothpick inserted into the middle comes out clean.

Complete this hearty "meal for many" with pecan pie, bread pudding or beignets. As they say in New Orleans, "Laissez les bons temps rouler!" (let the good times roll)!

Donna Britt is the creator of the Food.Life podcast and host of Central Oregon Daily's 'Taste This' food series.