Water polo is increasing in popularity nationwide. The trend continues in Central Oregon, with exponential growth in club participation

"It's the best game in the world."

That's how Chris Perret, executive director of the Bend Waves Water Polo Club, describes the game—one he's been actively involved in since playing for the University of California San Diego from 1981 to '85.

Today, water polo is ranked among the fastest-growing sports in the nation for high school kids. According to a study released by the National Federation of State High School Associations, girls' water polo tied for third place as the fastest-growing high school sport, growing by 18% from 2008-09 to 2018-19. Among boys, participation increased by 8.8% during that same time period and was the eighth-fastest growing sport.

It's fitting that one of the fastest-growing cities in the nation would also be seeing participation in the sport rise sharply. Perret estimates the club's numbers are growing by about 20% year over year. Launched in 2012, Bend Waves had about 65 kids participating in 2017, Perret said. In 2019, it was 125. With practice sessions for the spring season beginning Feb. 24, Perret expects even more kids to show up this year.

And with Bend Park and Recreation District on track to open a new 5,000-square-foot pool at the expanded Larkspur Community Center in southeast Bend this fall, the club—and other citywide aquatic programs—could see practice schedules expand accordingly.

“It’s very challenging and it takes a very competitive and spirited personality.” —Manhattan Wood tweet this

Water polo is roughly "a cross between soccer and basketball," but played in the water, Perret told the Source. Players—six "field" players on each team, plus a goalie—can't touch the bottom of the pool, and thus must toss the ball one-handed while treading water or otherwise staying afloat. If that sounds tough, it is—but players say that's what they love about it.

"I have played a lot of sports over the years and this continues to be my favorite," said Manhattan Wood, 15, of Bend, who's played water polo for two years. "It's very challenging and it takes a very competitive and spirited personality, for it can get very aggressive; but I can't begin to describe the feeling of scoring the game point goal." 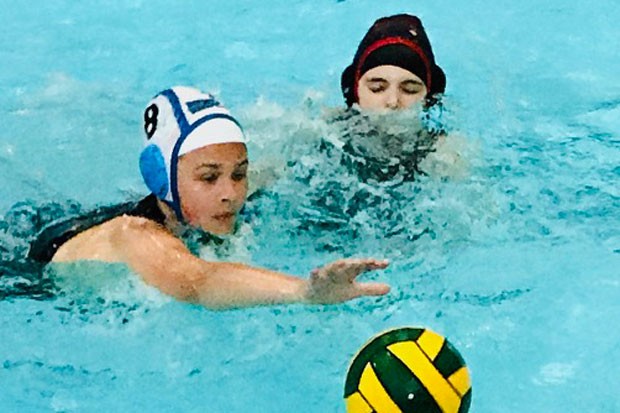 While local high school teams compete in the fall, spring is club season. Bend Waves players travel region-wide to compete, but for beginners, the club offers a number of entry points, including its three-week "splashball" sessions where kids age 6 and up can learn to play. The club also has a presence in Redmond and Madras. With an "everyone is welcome" policy, kids can also try out the sport at a practice session and join any time.

BPRD also holds novice water polo workshops, including an upcoming one for kids in 9th grade and up beginning March 2. Scholarships are available for both Bend Waves and BPRD programs.

And for the adults looking to take part in water polo, Perret says he has his sights set on creating a Masters' club in Central Oregon. For now, though, he points to the adult drop-in sessions held Sundays at 4pm at Juniper Swim & Fitness, as well as the Friday all-ages open, rotating practices organized by Bend Waves.