Malt of the Earth

With hop harvest season in the rearview mirror for another year and the outside temperature dropping, local taplists have begun to turn from lupulin-saturated fresh hop IPAs and pale ales to malt-driven red ales, brown ales and winter warmers. Though hops may be the most talked about ingredient in beer, malt is the most important. Without malt there is no beer and without beer, well, let's not even think about that. 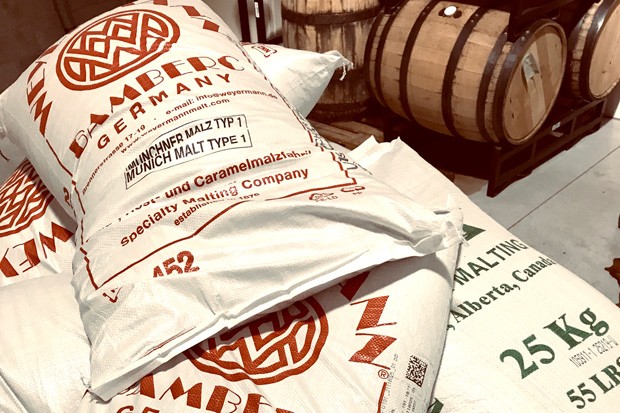 Malt is grain that has gone through a process of wetting, germinating and kilning to create and store enzymes that will later be activated in the brewhouse to convert starches in the grain into sugar. That liquid malt sugar (wort, in brewer's terms) is then fermented into beer. Beer is primarily brewed with barley malt but wheat, rye, and oats can also be malted. Color and flavor contribution from different malts depend on how the malt is kilned.  A wide range of colors from straw to amber to crude oil black, and flavors ranging from biscuit to toffee to chocolate are created by varying methods of kilning.

There are nearly countless types of malt in the world that vary, depending on the variety of grain, where it's grown, how it's malted and who malts it. By contrast, there are only about 80 hop varieties commercially available today. More are being introduced each year, but new hop varieties take a minimum of 10 years of development before they are even ready for brew trials.

Because IPA is king in today's beer world, the style's popularity has created a cult around hops, at the expense of malt. Beer drinkers wax poetically about the tropical blueberry notes of Mosaic hops and crave the juicy citrus notes of Citra, yet struggle to even name a single malt variety and use the term "malty" as some kind of negative.

In the past many breweries malted their own grain, but today most buy malt from specialized maltsters. Most craft breweries use a wide variety of malts from the U.K., Germany, France, Belgium, Canada and even Chile. Over the last few years a "craft malting" movement has exploded, giving brewers a deeper local connection to their beer's primary ingredient.

"Micro-maltsters" such as Mecca Grade Estate Malt in Madras and Skagit Valley Malting in Washington have taken up the explorative spirit of American craft brewing and are creating inventive new malts using both brand new barley varieties and reviving long lost ones.

The legendary Sabine Weyermann of the 140-year-old German malting company that bears her name once implored me to remember that "better malt makes better beer." No truer words have been spoken. What helps make your favorite IPA so good is not just hops; it's that critical balance that quality malt provides. As the weather continues to get colder, try eschewing your go-to IPA for a nice red ale or brown ale that will allow you to bask in the warmth and wonder of malt. Remember that "malty" isn't a dirty word.