June 12, 2020
2 comments
During the Black Lives Matter march in Bend on June 6, officials say David William Hart tried to pass his Jeep through a crosswalk while marchers were still walking through. The march went from Farewell Bend Park, through the Old Mill District and to the courthouse, followed by a vigil for George Floyd in Troy Field later that evening.

According to the Deschutes County District Attorney's office, the 52-year-old Bend man was driving through the intersection at NW Lava Road and SW Industrial Way when he tried to make his way through the marchers, hitting a woman and one baby stroller. Hart has since been charged with four counts of recklessly endangering another person and one count of assault in the fourth degree, the DA's office announced today. 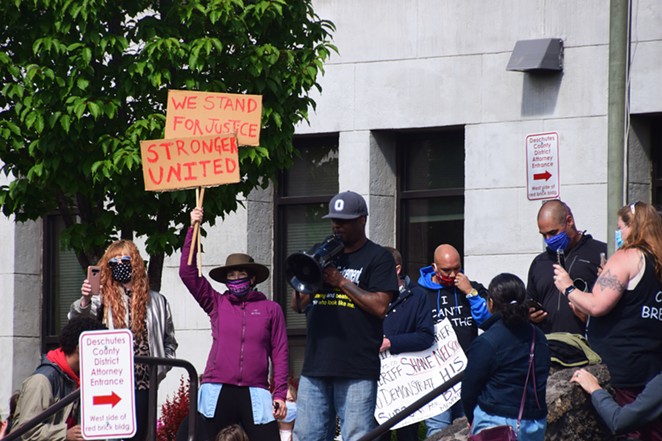 "Thank you to the community members who came forward to report what they observed and to the Bend Police Department who conducted a thorough investigation," said District Attorney Hummel in a statement. "In our community, people are free to express their beliefs in lawful and peaceful assemblies. I will not stand idly by when someone endangers other people exercising their constitutional rights to seek redress of their grievances."

The DA's office reported today that, "After waiting for a few minutes, Mr. Hart did not want to wait anymore, so he edged his car slowly into the crowd in the crosswalk."

"That having been said, this case will not be about the merits of the  beliefs of the marchers. This case will be about whether David William Hart committed the crimes for which he is charged. He will carry the presumption of innocence throughout the process and will be afforded due process of law," closed Hummel.