Before taking the snowcat trip up to Elk Lake, my mind was clouded with the stress of day-to-day life. When would I have time to do laundry? Did I remember to pay my gas bill?

The 45-minute drive through the wilderness quickly brought me back down to size. The snowy vastness reminded me how small my problems really were. Spending the afternoon with Mark Thompson, a lifelong Bendite and true mountain man, reminded me how simple and fulfilling life can be when we shed the things we don't need. 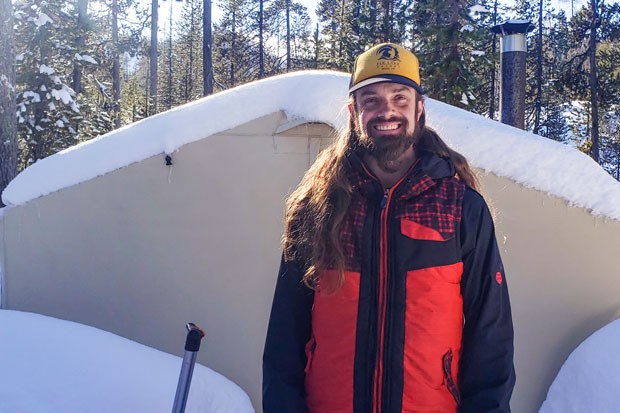 Thompson, a self-proclaimed "outdoorsman," first worked at Elk Lake Resort during the summer of 2014. The resort is an all-season destination nestled near Broken Top, South Sister and Mt. Bachelor. During the summer, the lake is open for a range of water-related activities. During the winter, visitors—who arrive via snowcat or snowmobile, since the Cascade Lakes Highway is closed—snowshoe, cross-country ski and snowmobile, resting at the Lodge restaurant for a meal and a cocktail in between excursions, or staying in one of the cabins.

Thompson returned this summer to work in the Lodge's kitchen. Instead of staying in the provided bunk-style staff housing, he built his own canvas tent. Camping on-site during the summer costs staff members next to nothing, and Thompson was able to save up enough to travel the world for two months in spring.

"Summer at Elk Lake is lively, and there's no shortage of things to do or people to meet," Thompson shared. Had Thompson called it quits after summer, his story might be a little less interesting.

But rather than return home for the winter, he decided to hand-build an insulated cabin in the dense woods. The cabin is small, cozy and minimalistic; think tiny house, but smaller, isolated and completely covered in snow. 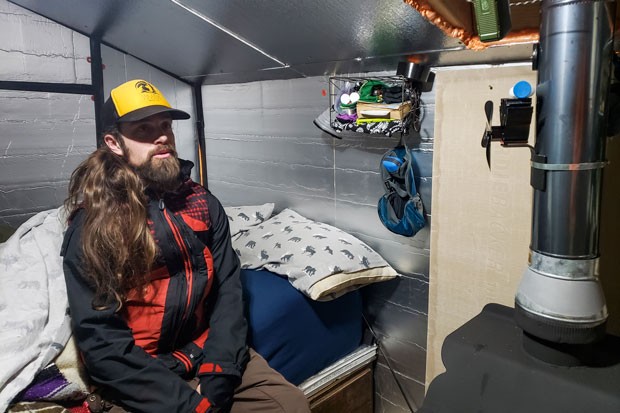 "We got 5 feet of snow in four days," he said. "Over Christmas break my wood-burning stove broke... it was -8 degrees at the time. The Lodge is open over the holidays, so I couldn't go anywhere. It was broken for 10 days."

The stove weighs over 300 pounds, and it took three grown men to drag it inside. He scored the stove for $175 on Craigslist, but it wasn't the costliest feature of the cabin. "The insulation cost me about $400," said Thompson. "The entire cabin cost me $1,500 when all was said and done. Things like tape and screws, those were the most expensive." But considering that employees don't pay rent in the winter and he has no bills (thanks to no electricity and no running water), the setup is definitely cost efficient.

But is living alone in the middle of nowhere worth the freedom to travel for two months out of the year? For Thompson, the answer is usually "yes."

"The most difficult part of living at Elk Lake during the winter is the isolation, and trying to combat the loneliness. I work for four days and I'm off for three, Monday through Wednesday. If no one is at the lodge during my 'weekend,' I know I'm the only human being for 40 miles. I have to be mindful of the situations I put myself in, you know, self-preservation is a big thing. If I need help, no one's coming." 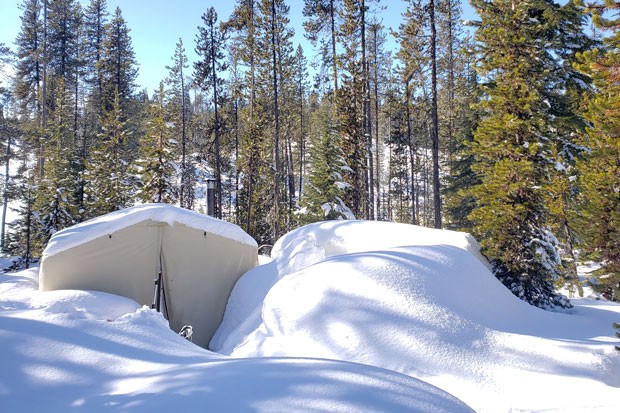 Thompson's love of the outdoors helps keep him occupied. "I hike a lot by myself. When the snow's good I'll splitboard around. I put on my snowshoes and go exploring, and I'm happy. The tranquility and serenity is unreal." Thompson takes a trip or two to town when he needs more food and supplies, though that isn't always possible in the harsh winter conditions. He hasn't found himself desperate enough to hunt squirrels... not yet, at least.

"I'll track animals, just chase them around when I find them. I spend a lot of time observing and appreciating wildlife. There's a pair of mated Bald Eagles that only come through in the winter, and we've got a fox on property that I track. Seeing a deer in the middle of the woods is a whole different experience than seeing one in town... they're in their element, and you're not. It instills a whole different level of respect."

Thompson said he plans on disassembling his cabin over the summer and rebuilding it again. His advice to those thinking of following suit? "If you're going to live here over the summer or the winter and you don't like exploring, you're wasting your time. And time is the biggest gift you can give to yourself... or to anyone else."