Demonstration Against ICE at Drake Park

Kyle Switzer
Locals gathered Saturday in Bend's Drake Park to stand in solidarity with the protesters who stood Wednesday against Immigration and Customs Enforcement activity in Bend.

Several of the leaders at Saturday's march discussed the everyday racism against the Latinx community, as well as other topics.

The Source captured some of the scene from the protests, seen in this slideshow. The event was a peaceful demonstration, with most participants sitting down throughout the warm afternoon. Some others stood near the street along Drake Park to rally passersby. 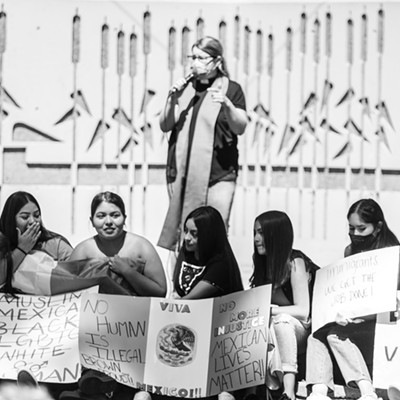 March against ICE
By Kyle Switzer
Click to View 8 slides


Luke Richter of Central Oregon Peacekeepers, one of the first to stand in front of the ICE bus carrying two Bend men, got a standing ovation for his work on Wednesday. Several leaders from Wednesday's protest showed up to the event in Drake Park—and after it was over, headed to Prineville for another rally in support of Black Lives Matter. They included Richter, Morgan Schmidt of First Presbyterian Church, members of the Central Oregon Diversity Project, and others who spoke throughout the night Wednesday.