When it comes to farm crops, hemp and marijuana aren't the water hogs

If you are reading this, it is likely that you have also read a recent rash of Oregon and national media outlets bemoaning the criminal marijuana conspiracy that is consuming Southern and Central Oregon's water.

"'Blatant theft': Illegal pot farms in Oregon taking drought-stricken state's scarce water," screamed Eugene's The Register-Guard on Sept. 17 above an Associated Press story by Andrew Selsky. Less than a month later, on Oct. 13, Selsky wrote a follow-up of sorts, which made its way to The Washington Post: "Overwhelmed by Illegal Pot, Oregon County Declares Emergency." 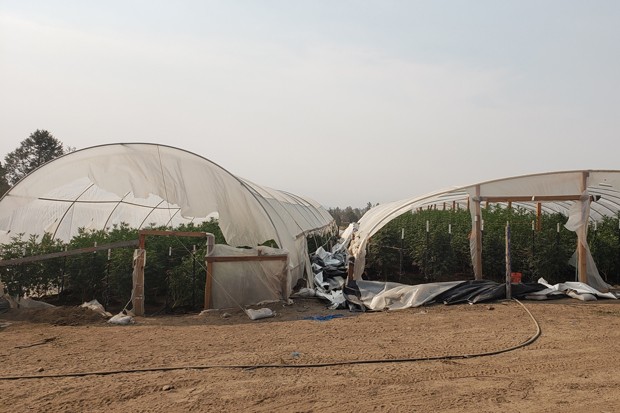 The latter piece reported on Jackson County Commissioners declaring an emergency to get their hands on state funding (and perhaps National Guard troops) to fight unregulated marijuana farms.

"Since recreational marijuana was legalized by the voters of Oregon in the November 2014 general election, the illegal and unlawful production of marijuana in our county has overwhelmed the ability of our county and state regulators to enforce relevant laws in our community," Jackson County Commissioner Rick Dyer said in a press conference Oct. 13.

While Commissioner Dyer seems intent to blame illicit marijuana production on the voters' decision to legalize marijuana in 2014, Selsky seems to be going a step further; he's ready to place disproportionate blame on unregulated marijuana farms for the West's current, decades-long megadrought.

"From dusty towns to forests in the U.S. West, illegal marijuana growers are taking water in uncontrolled amounts when there often isn't enough to go around for even licensed users," Selsky wrote. He continued, claiming the "number of illegal grows appears to have increased recently as the Pacific Northwest endured its driest spring since 1924."

Naturally, Deschutes County Sheriff Shane Nelson got in on the water blame-game, commenting not long after his deputies raided an unregulated marijuana farm in Alfalfa. Nelson told Selsky that the farm's neighbors were forced to drill a new well because of water "theft." Neither Nelson nor the unnamed neighbor were directly quoted.

Those knowledgeable about farming will tell you, however, that hemp and marijuana consume a fraction of the water sucked up by cash crops like alfalfa, wheat or corn.

Matt Cyrus, president of the Deschutes Farm Bureau and the Central Oregon Hemp Association, has grown hemp, the non-psychoactive version of cannabis, in past seasons, and currently farms between 200 and 1,000 acres of various crops in Central Oregon.

"Our hemp used about one-third as much water as our hay field," Cyrus said. "We had one field where it rained, so we had moisture in the soil, and it was almost a month before we watered it at all." Cyrus said there is no difference in water consumption between hemp plants and marijuana plants.

There are methods too numerous to count that can increase or decrease the water needed to grow a cannabis plant. An outdoor plant may need nothing at all in a wet enough season, while indoor plants often benefit from complicated water-delivery systems. To a farmer who's seen everything, however, marijuana simply isn't as thirsty as other crops.

"In the last few years, we've learned a lot about the crop and discovered that it is very drought tolerant as well as frost resistant," Cyrus said.

Moreover, the potency of marijuana means fewer acres are needed to meet demand. For example, it requires between 200 and 400 gallons of water to create one bottle of wine from grape to table. A typical marijuana plant might produce up to a pound of usable marijuana, and requires 1 gallon of water per day in a growing season of a few months. As any casual user knows, 1 pound of marijuana is a massive amount; more akin to a case of wine. The 1/8th-ounce measurement for a joint is more comparable to a bottle of wine.

That joint requires about 1 gallon of water—all season—to reach you, seed to lighter. In the battle of sip versus puff, wine sucks up many orders of magnitude more water from seed to harvest.

Science is no match for ideology, however, and funding pressures perhaps related to the passage of Measure 110—the ballot measure that decriminalized user quantities of cocaine, heroin, meth and other drugs—are beginning to hurt the bottom line of some law enforcement agencies. The Jackson County Community Justice Department eliminated eight departments in its latest budget. It seems harder to break the rules of your parole if low-level drug possession no longer constitutes a parole-violating offense.

When a law enforcement budget depends on boogeymen, it is essential to resurrect an old one if you can't create a new one.

Klamath County Sheriff Chris Kaber told the Oregon Public Broadcasting podcast Think Out Loud that he treats marijuana as an "organized crime" issue, and blamed law enforcement budget cuts in prior years for the recent "10-fold" uptick he is seeing in illegal marijuana farms.

In the same interview, Lt. Brandon Boice of the Oregon State Police said the "criminal element" involved a "substantial cartel presence" in Southern Oregon in particular. Boice remarked that "it's not exclusively cartels; there's all sorts of nationalities, of Asian descent, Caucasian, that are involved with organized crime and the criminal element."

Josephine County Sheriff Dave Daniels, quoted in Selsky's Register-Guard piece, said an illegal marijuana farm utilized pumps and pipes to draw water from Deer Creek. Daniels called it "one of the most blatant and ugly things I've seen." (Daniel's department worked a double-murder as recently as May 2021.)

Yes, unregulated marijuana farms should be policed, and should not steal water. Legal marijuana license holders cheer black-market arrests and seizures, though it's tough to tell if they compete for the same consumers. That does not mean we throw context out the window. Implicitly blaming marijuana farming for a 20-year drought that is undoubtedly more a result of mainstream agriculture, a booming population and a warming climate ignores that context. It also ignores the fact that many of the black-market cannabis farmers actually do have water rights.

"Illegal growers may be stealing water because they don't have [marijuana producer] permits," Cyrus said. "But if they're using legal water, they will be using less water than they would for any other crop."

In short, a farmer illegally producing cannabis may be better for the water table than just about any other kind of farmer.