Mariposa Nocturna in Your Backyard | The Source Weekly - Bend, Oregon

Mariposa Nocturna in Your Backyard

What denizens of the dark roam your backyard at night?

Moths (known in Spanish as polillas or la mariposa nocturna) are the Rodney Dangerfield of the Lepidopteran world—they "don't get no respect." These denizens of the dark flit around our neighborhoods and woodlands under the cover of darkness unbeknownst to most of us. The often dark, "hairy" bodies of moths don't ignite the interest meter like their cousins, day-flying colorful butterflies. 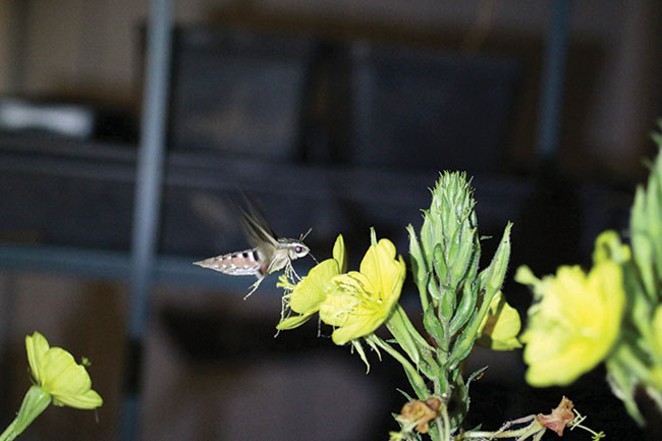 In Central Oregon, the pandora moth is probably the most well-known moth due to its large size and seasonal abundance. Who hasn't been to a Bend Elks game only to view hundreds of moths as they lift off when a foul ball hits the backstop netting?

Both moths and butterflies are in the order Lepidoptera – the name is from Greek words meaning "scaled wings," which refers to the tiny, shingled-like appearance of their wings under the microscope. Moths tend to be nocturnal (not all) and their antennae are feathery or bear saw-like edges to better pick up pheromones and floral scents. In the U.S., there are roughly 11,000 species of moths compared to fewer than 1,000 butterflies.

What role do moths play in the ecosystem?

"Pollinators and food for other wildlife, mainly birds," said David Droppers, Northwest regional coordinator for Butterflies and Moths of North America. "If someone asks me about attracting birds to their yard, I tell them to plant the plants that moths lay their eggs on because caterpillars are high on the list for baby bird food." 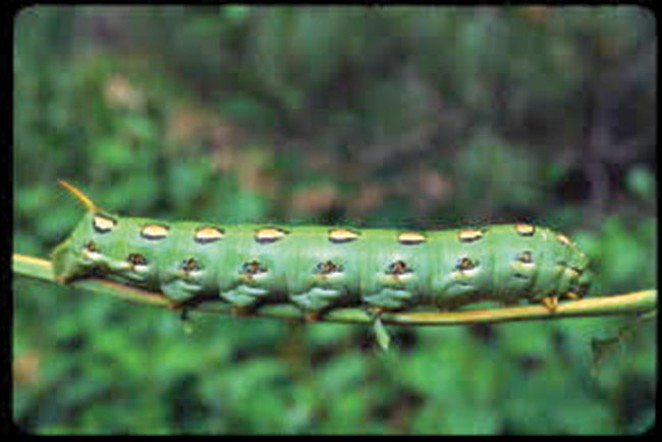 "BAMONA is a rudimentary eBird, a database where people can submit their sightings and contribute to the knowledge of moths," said Droppers. "If you have a cellphone and a porch light you can help with phenology and distribution; it's a database where the average person can contribute."

At least one Bendite has been bitten by the moth bug.

"I got interested in moths via a general interest in entomology," said Bob Johnson. "Merrill Peterson's semi-new (500+ page) bug book ("Pacific Northwest Insects") got me going. Later I stumbled across Carl Barrentine's YouTube videos on mothing and Moth Week (last week in July), and it seemed simple enough to get a black light to see what was going on at night." Last summer Johnson ran a trap every night at his house. "Once I saw all the diversity, and realized that there was this huge vibrant nighttime world that I didn't know anything about and that no one else I knew seemed to know anything about, either, I was hooked."

Johnson uses a Lumix LX-3 point-and-shoot camera to photograph his captured moths before he releases them. Johnson uploads images to The Field Guide for Lepidoptera site which uses artificial intelligence to "learn" how to identify images, or to Bug Guide. Other sites that accept images are BAMONA and iNaturalist.

So, what type of plants attract moths? "If you can think of a native tree or shrub, especially ones in the rose family, there are going to be a lot of moths that use it and many moths are host specific as pollinators or herbivores," said Droppers. This is in reference to sphinx moth caterpillars, also known as tomato hornworms, which feed on tomato leaves. "Moths can serve as both pest and friend."

If someone asks me about attracting birds to their yard, I tell them to plant the plants that moths lay their eggs on because caterpillars are high on the list for baby bird food.—David Droppers tweet this

Though gardeners might not like the hornworms, the adult sphinx moth resembles a hummingbird as it sips nectar from night-blooming flowers such as evening primrose. The moth's wing structure allows them to hover like a hummer, lending to some folks to colloquially call them "hummingbird moths" or "hawkmoths."

So how common are moths? In a typical suburban yard, Dropper estimates someone could locate 30 to 40 species in a night. "I've got some folks in D.C. who have over 500 moths on their yard list. Bob Johnson is still trying to calculate the number of species he's trapped in his Bend yard but he estimates he "...saw over 275 species last year, which is a heck of a lot of species, considering I'm running a single trap outside my back door, here in the middle of town." Droppers agrees. "You just spend a few nights watching moths, then say, 'Wait, wait, this whole show is happening in my backyard?"' said Droppers. With a little more interest, perhaps moths will get the respect they deserve.