With no more mask mandates, individuals make the choice to keep or remove their masks

Oregon ended its mask mandate for indoor spaces on March 12, ending a nearly two-year period of mandatory masking. Since the state first instituted mask mandates in June 2020, there's only been one period without the mandate, which was quickly reinstated as the Delta variant surged. Oregon Gov. Kate Brown shelved the first mask mandate after it reached a pre-set target of 70% vaccination, but the most recent one ended after meeting targets on hospitalizations.

"When the number of beds occupied was under 400, that was kind of the goal of the state and it was decreasing. That's when they decided that there was low enough transmission rates, as well as the hospital system being able to handle that. And then, the Oregon, Washington and California governors all kind of aligned on a date, so that it was all happening on the West Coast at the same time," said Emily Freeland, operations section chief at Deschutes County Health Services.

Freeland said there's still a good amount of disease transmission, but the state has moved toward emphasizing severe disease and hospitalizations rather than case numbers after Omicron infected unprecedented numbers of people. The Oregon Health Authority reported that as of the week of March 6, the most recent data available, there were 130 hospitalizations and 21 deaths.

Looking around any public space in Central Oregon you'll find most people aren't masking now that it's not mandated, but you'll still find some peppered throughout the crowd.

"I think a lot of people don't realize that the list of 'underlying conditions' that puts you at a higher risk for complications with COVID includes stuff we consider pretty non-critical, like ADHD or depression," said Laura Camacho, a Central Oregonian who's continuing to wear a KN95 mask in indoor spaces. "The risk of post-COVID conditions in currently healthy people is not zero; it's somewhere between 10-30%. It's a game of roulette that a lot of people don't even realize they're playing." 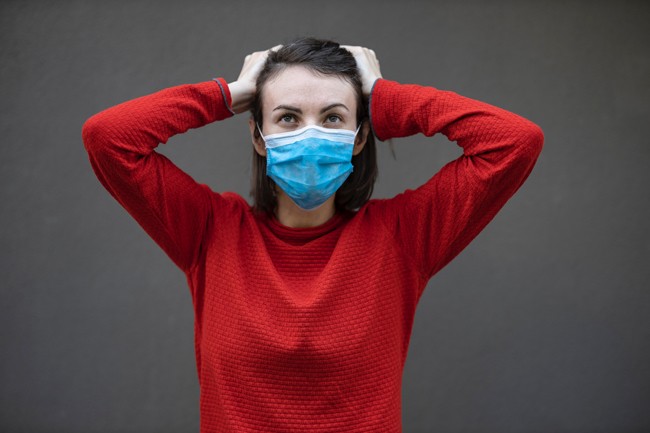 Camacho said her family's exposure to COVID has been devastating; one of her children that used to have heaps of energy now gets exhausted quickly; another experienced a mental health decline after contracting the virus and a third was diagnosed with postural orthostatic tachycardia syndrome, or POTS, an autonomic nervous system disorder. Camacho herself still suffers from a cough, lung ache, exhaustion and short-term memory glitches.

"There's a level at which I'm not sure I'll ever again want to be in crowded public spaces without a mask on, and that isn't just because of COVID. Aside from catching Omicron, no one in my family had even the tiniest cold in over two years," Camacho said.

After the mandate lifted, Clare Kubota wanted to remain cautious and continue to mask in public spaces. But after the first non-masked event at her church, she realized just how eager she was to be done with them.

“I think it's really important that whatever people's choices are, whether it's to continue to wear a mask, or being in a space with people that are not wearing a mask, I am, respecting other people's decisions and helping have some kind of cohesiveness in our community and kindness as we move forward.”—Emily Freeland tweet this

"When we went back and had our first service this past Sunday with no masks, we have a space that fits about 150, and we had about 50 people there. And I did not wear a mask there. Because I was just so excited to see people's smiles and just to not have to be burdened by the mask," Kubota said. "I think in hindsight when I initially said, 'I would have worn a mask in that situation.' But, no, I'm just ready to be done."

Pandemic fatigue was kicking in months after COVID-19 first began circulating. Depression and anxiety rates rose by nearly a third, alcohol consumption spiked, nearly one in five health care workers quit their job during the pandemic.

"I think it's a difficult situation, there's variable levels of risk assessments that people are doing. And some people are really uncomfortable with removing masks, and other people cannot wait," Freeland of Deschutes County said. "I think it's really important that whatever people's choices are, whether it's to continue to wear a mask, or being in a space with people that are not wearing a mask, I am, respecting other people's decisions and helping have some kind of cohesiveness in our community and kindness as we move forward."