Man, those of you spending this time watching "Contagion" and "Outbreak" on Netflix are so much more intense than I am. I don't know, movies about global pandemics are just hitting a little too close to home right now, and my need for "fun" entertainment has been turned up several notches.

Don't get me wrong, I'm still keeping myself updated and informed, but when it comes to movies and shows, I've been keeping things a little light lately. With that said, here are some of the things I've been checking out this month—when I'm not completely overwhelmed by anxiety and just staring off into space. 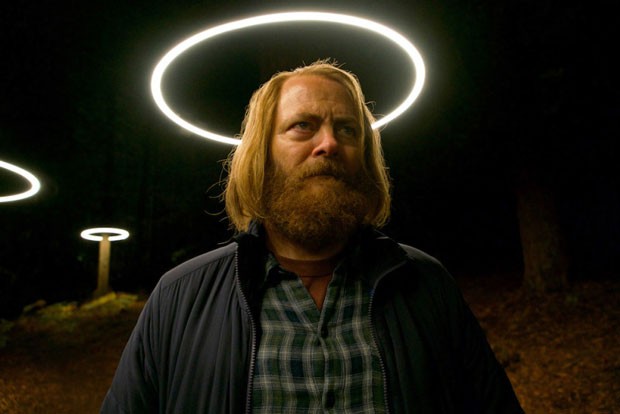 Long story short, I'm in the middle of an intermittent fasting regimen in which I don't eat for 22 hours and then eat for two. Doing this while being stuck at home during self-quarantine is extra difficult, but I'm trying to lose around five or six stone and really have the, dare I say, hunger to get it done. So, fantasizing about food has become a fun little form of self-torture lately and the podcast "A Hotdog is a Sandwich" is my device of choice. The entire show is dedicated to food debates that border on silly, but always end up being kinda hilarious and fascinating while dedicating entire episodes to questions such as, "Does pineapple belong on pizza?"

Kiwi Aactor/comedian Rhys Darby ('Flight of the Conchords") tends to steal every scene he's in, so it's about time he had his own podcast with him at the center. Because sometimes good things do happen, he's chosen to host a show focused on UFOs and people's first-hand accounts of their close encounters with them. "Aliens Like Us" takes the best of "Coast to Coast" and "The X-Files" and becomes a hybridization of a chilling oral history and a heartwarming ode to the unknown. No one is mocked; instead, Darby and his co-hosts put their heads together searching for answers while knowing that the truth is out there, somewhere.

With the complete shutdown of movie theaters for the time being, streaming is all we have right now (aside from cable, I guess, but is that still a thing?). On Netflix, I've been diving into a lot of my comfort-food media that I can watch over and over again—which means quite a bit of "Space Jam," "Trailer Park Boys" and "Kingpin." If you're looking for something new though, this week sees the premiere of the new season of the criminally underrated show "Happy" (about Detective Stabler from "SVU" dealing with bad guys and an animated unicorn only he can see), as well as a new season of Jason Bateman's bingeworthy "Ozark," and the first season of a creepy looking Polish psychological thriller called "The Mire."

Hulu launched the first three episodes of its new original show, "Little Fires Everywhere" starring Reese Witherspoon and Kerry Washington, which plays like "Desperate Housewives" meets "Big Little Lies." While that show is solid, the real magic on Hulu right now is "Devs," a mind-f**k thriller about a tech company that learns how to see the future. Starring Nick "Ron Swanson" Offerman, this show from Alex Garland, the brilliant mind behind "Ex Machina" and "Annihilation," could end up being a masterpiece if it sticks the landing.

With the new season of "Westworld" beginning on HBO and Amazon launching the "In-Theater" platform with first run movies like "Onward" and "The Invisible Man," there's never been a better time to be stuck at home. I know that came off snarky, but I'm really hungry and trying to make that lemonade. Stay safe out there.