Hey everybody! Remember that time we were in the middle of a pandemic and it got politicized but instead of our president trying to bridge the gap between us, he gave a speech at Mt. Rushmore comparing Black Lives Matter protesters to fascists and Nazis? Me, too. 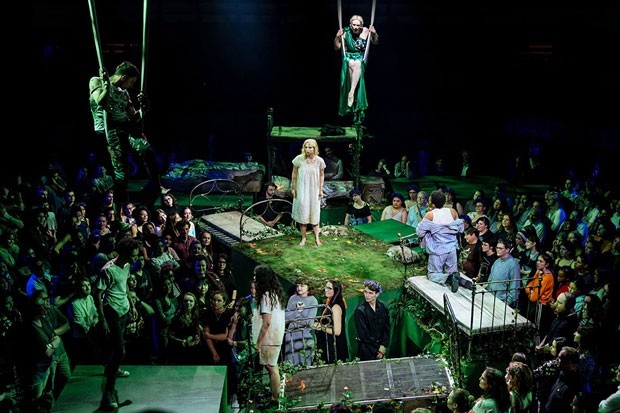 I'm super ready to wake up now. Once again (for the fourth month in a row), podcasts and streaming services have helped ease the stress of daily life for me a little, and the least I can do is share a few of the things that make me happy with you fine folk.

I have never been beaten so bad by the police that I barely noticed getting tased, but you know who has? Comedian Jake Flores, who went to a George Floyd-related protest in Brooklyn last month and (along with many other peaceful protesters) got his ass handed to him by the NYPD. Flores relates his story in another unmissable episode of "Pod Damn America," which is quickly becoming the most politically charged and incisive podcast during our current culture/face mask war.

If you're looking for some laughs in an otherwise fairly dark and unsettling time, new episodes of "Polar Opposites" have been breaking down the difference between activism and performative activism in ways that will drop your jaw. Are you afraid that you're a bad ally and much more into virtue signaling than actually making a difference? Give new episodes of "Polar Opposites" a chance to show you the way.

NPR's always fascinating "Throughline" tackles deeply held American systems of oppression by breaking down their history and showing exactly how we got from there to here. One of the newest episodes is focused on the American system of policing, its history of enforcing slavery, and how little has been changed in the institution since then. If knowledge is power, then this podcast will get you swole.

I've been saving most of my seriousness for the podcasting realm and have been watching some pretty fun stuff lately. Although, Netflix's new "Unsolved Mysteries" show is just about as dark and disturbing as humanly possible, I still take great pleasure in seeing how it manages to update the classic format for a modern audience already obsessed with true crime shenanigans. Netflix has also taken my heart with the bonkers new show, "Warrior Nun." Imagine if "Buffy the Vampire Slayer" was less whiny and had twice the martial arts and intrigue, and you've got it! A show called "Warrior Nun" should be trash. In fact, it might be trash, but it's also fun and smart and filled with badass female characters that keep getting shaded with more depth with each episode.

If you're not getting your true crime fix from "Unsolved Mysteries," HBOMax has launched a new miniseries based on the true crime masterpiece, "I'll Be Gone in the Dark," which focuses on the hunt by Michelle McNamara for the Golden State Killer. She passed away in her sleep just a few months before he was captured, and this doc focuses on the work she did to identify the killer after decades of inactivity. This story will be as big (if not bigger) than "Serial," mark my words.

Or, if you're like me, you're just watching Disney+'s filmed version of "Hamilton" over and over again. How many times is too many times? If you were energized from "Hamilton" and still needing a theatrical fix, YouTube has been posting exclusive content from The Old Vic, The National Theater, Shakespeare's Globe and the Stratford Festival to keep us occupied. The NT version of "A Midsummer Night's Dream" is legit one of the best Shakespeare adaptations I've ever seen and has Brienne Of Tarth herself, Gwendoline Christie, playing Titania, so I'm not sure how it could be any better. Plus, you can donate to the theaters while you watch to help keep theater alive for as long as we can.