September Edition: Were we all raised by wolves?

For last month's column of May the Source Be With You, I talked about my anxiety connected to the world being on fire... several weeks before the air had the quality of actually living inside of a camp fire. I was trying to be metaphorical, not to predict the future. It's pretty disturbing because for the first time in my life, the toxic air quality combined with how dark and gloomy everything looks with all the smoke in the air makes the outward appearance of Central Oregon look basically hellish. It's like my inner feelings were made manifest.

As a giant fan of horror movies, I thought a world where the air is poison, other people's spit can kill us and the safety of me and my loved ones is being decided by a reality show host would be more fun. Seriously, Pennywise the Clown could show up riding the dragon Smaug at this point and it would only get a sigh out of me. 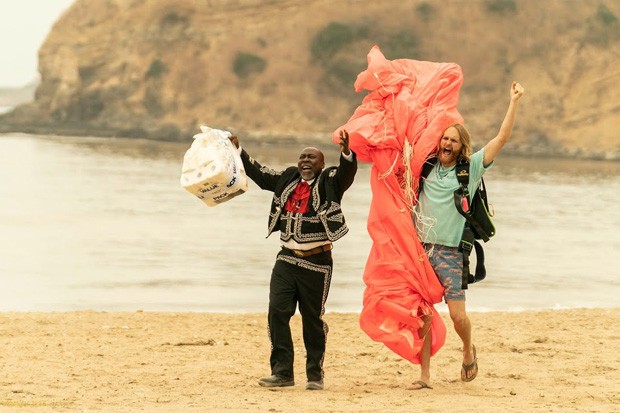 But I'm less alarmed than I was a month ago, too. People are still making beautiful art, still falling in love and still being a strong shoulder for those around them. As downright nightmarish as some of these days feel, I know there is another side to this darkness and we'll come out the other end stronger and, hopefully, closer.

Meanwhile, stay inside and check out some of the cool stuff I discovered so far in September.

I've been paying more and more attention to how people are treating workers in the service industry right now, and I've noticed that for the most part, they're treated terribly. We're losing our politeness. I'm not sure if it's a Trump thing, a COVID thing or a surrounded-by-fires-and pretending-everything-is-fine thing. So I went on a hunt for a podcast about manners and I found "Were You Raised By Wolves?" the best damn podcast about etiquette I've ever heard. It's also the only one I've heard, but comedian Leah Bonnema and journalist Nick Leighton are so funny and assured that it's the only one I need. Our hurried self-interest will eventually reach a tipping point and Bonnema and Leighton remind us that being rude and awful not only erodes the fabric of society, but it eats away at our soul a little, too.

The best show on Hulu is a little two-season oddity from AMC called "Lodge 49," starring Kurt Russell's son. I've talked about the show before, but I feel like I need to remind people about the series' importance. It's a modern-day fable about an aimless and emotionally broken ex-surfer in Long Beach who discovers a weird fraternal lodge that he thinks will help him back on the path to recovering his old life. It's funny, sad and gentle in the most beautiful way and whenever I feel cynical or scared, I put the show on and am reminded of the things that give me strength. The time for this show is right now. Discover it with me.

HBOMax launched a new sci-fi nightmare from Ridley Scott, called "Raised By Wolves" that's perfect for anyone missing stories set in the universe of "Alien" and "Lovecraft Country," continues to defy all the expectations I had for it. It's basically "Get Out" on a larger scale. The new season of "The Boys" on Amazon is audacious and jaw-dropping, while Netflix is going big with the charming "Cobra Kai" and the haunted-astronaut drama "Away." All of these things are cool and fun and worth watching, but just watch "Lodge 49" instead. It'll make you a better person, if just for an hour.