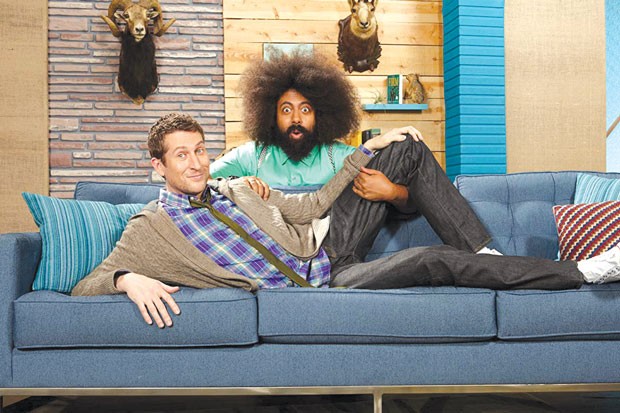 It's so hot outside. Not the good kind of hot, but the muggy, all-day sweat fest that is July in Central Oregon. I'm normally an indoor kid to begin with, so I mostly compensate by drinking lots of mint juleps by my air conditioner while listening to podcasts and streaming goofy things from Netflix as my cat looks on in confusion. Here are a few of the things I've been enjoying in my deep, dark cave of an apartment.

There's a new study that says over 180 million Americans are listening to podcasts every month, which means I'm probably not sharing anything with you all that you haven't already found for yourself. But, maybe since I'm into some pretty weirdly diverse things, I can shed a flickering bare bulb on some pretty cool stuff.

Whenever you hear a crazy story on the news about someone taking bath salts and eating a face or a naked dude fighting an alligator, nine times out of 10 the crime is perpetrated by "Florida Man." Just in case you're like me and fascinated by the endless amount of shenanigans in Florida, there's a perfect podcast for us: "Felonious Florida." The podcast is currently looking at two unsolved cases from the Sunshine State. Just when you think you have a handle on where the true crime story is headed, the facts zigzag in staggeringly unpredictable ways.

If true crime is just a little too heavy for the summer months, there's another great podcast called "Inside the Disney Vault" that analyzes every Disney release in chronological order. The hosts are filled with useless Disney facts and they dive deeply into each release, giving you musical theater nerds one of the most fun new 'casts of the year.

When it's this hot, it's much easier to throw on something that doesn't require too much in the attention span department. It's tempting to just binge "The Office" or "Parks and Recreation" from the beginning. Those shows are like a cool breeze across boiling skin, but maybe it's time to discover a different series you can binge from beginning to end.

The first two seasons of "GLOW" are beautiful and life-affirming, but if you want an entire series, beginning to end, you can go with the ridiculously ludicrous "Scandal" or if you need something a little weird, "Comedy Bang! Bang!" is always the right choice. Watching all 110 episodes in a row will make you feel like you're in the middle of some epic fever dream where all the logic is backwards and everyone but you is a comedian. The show at its worst is always entertaining, even when it becomes so bizarre that you're not sure whether to laugh or cry.