A diplomat's daughter, foreign correspondent and mermaid morphs into a chef 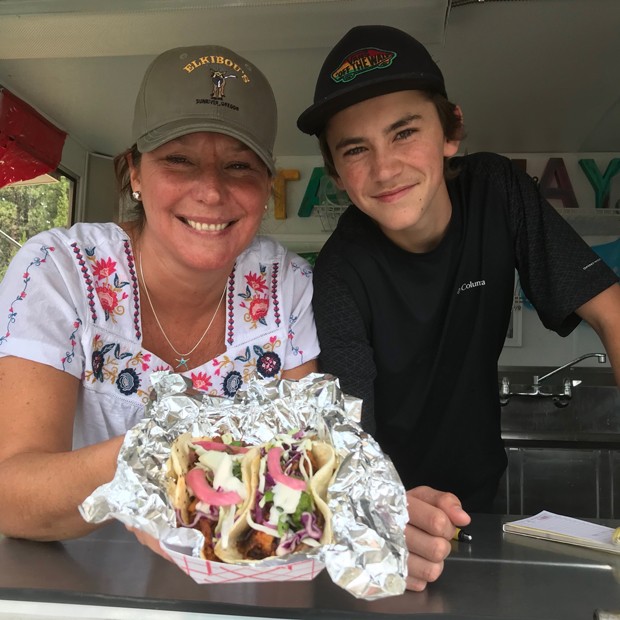 She's the daughter of Guatemala's one-time ambassador to the U.S., a former freelance correspondent for National Public Radio and CNN covering Guatemala in the '90s, and a radio personality in Mexico. Today Maya Padilla and her teenage son/sous chef Dante prepare mouth-watering dishes at Taco Maya, launched last summer in Sunriver's food court. Though she'll travel Oregon in warmer months, in winter Padilla becomes a snowbird, cheffing on charter vessels in the Caribbean.

Padilla's culinary journey began as a kid, inspired by her dad's cooking skills. Later, traveling in Mexico, she learned the art of making the taco. Padilla jumped at the chance to fill in for a dive boat cook. Afterward, she began cheffing on private charters in the Bahamas, swimming with the dolphins in her free time. Besides loving to cook for people, she says she has a "mermaid spirit" and loves the ocean.

Whether it's produce on Rome's streets or the Mayan farmers in Guatemala's markets, the colors and scents, the people and the liveliness, the herbs and fresh produce are Padilla's muses. Happily and serendipitously, she landed in Bend, where, along with locally grown products, she loves the air, the water, the lakes and the sense of freedom...and has called the community home for nearly 20 years. Among Padilla's many anecdotes is provisioning for some British Virgin Islands charters. For hair-raising weeks she drove shopped for breakfast, lunch and dinner for 10 guests and crew...reportedly a tough assignment. So was storing food and cooking in a tiny galley without windows! But the ocean's beauty and passengers' pleasure were, she says, "all worth the hard work." Another joy is when her son and chief taster responds enthusiastically to her carnitas and carne asada, or lime, jalapeno, and cilantro sauce, or fish tacos with purple slaw and pineapple. Padilla dreams of perhaps returning to NPR one day, hosting a show about food and travel.