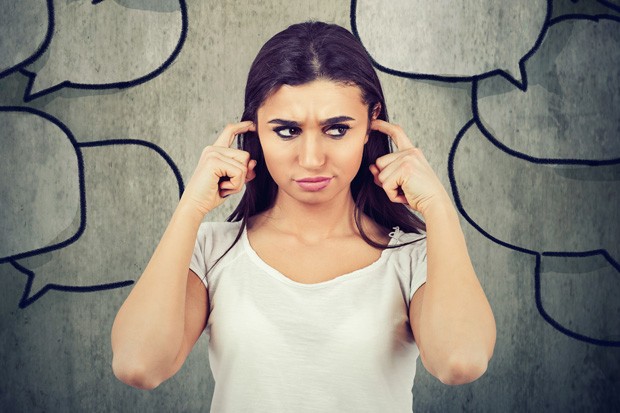 My friend won't stop talking about her new crush, and it's driving me up the wall. I was annoyed, but now I'm getting increasingly angry, and I don't appreciate this toxic feeling rising up. It's all her and her new love all the time. If she asks anything about me or how I'm doing, it's an afterthought. I try to avoid conflict, so I haven't said anything. I keep hoping she'll realize she's behaving really selfishly. What will it take to get her to recognize this and start being a better friend?

There's actual friendship, and then there's calling somebody a friend but using them as a giant ear-shaped trash can.

Not surprisingly, being treated this way has left you feeling angry. Like many people, you're uncomfortable with anger. Anger is often characterized (wrongly) as a "negative" emotion. Sure, the expression of anger — ours or that of somebody around us — can make us feel stressed out, uncomfortable, and even poisoned. Uncontrolled anger can get us in trouble (sometimes for 20 years to life).

However, anger, like the rest of our emotions, is actually functional. Over millions of years, our emotions evolved to be the factory foremen of human behavior, motivating us to behave in ways that solved problems humans dealt with on a recurring basis, such as finding a mate, avoiding a beat down, and getting a friend to be more give-and-take than take, take, take.

Evolutionary psychologist Aaron Sell, who researches anger, explains that it is one of a few emotions that serves to regulate not just our behavior but also that of others (as do shame and sadness). When we express sadness, for example, like by sobbing, it evokes empathy in others, which makes them want to reach out and give us a hug and maybe even let us use their shoulder as a substitute for snotty Kleenex.

Sell calls anger a "recalibrational emotion" and explains that it functions as a bargaining tool for us to negotiate for better treatment. When we notice that another person doesn't place enough value on our "welfare" (meaning our interests, our well-being), anger rises up in us, motivating us to take action to get the other person to correct — that is, recalibrate the imbalance, to treat us better.

Anger does its recalibrational work — that is, incentivizes better treatment — through two tactics, explains Sell: the potential for the angry person to inflict costs (sometimes just through the scary ugliness of aggression) or to withdraw benefits (such as the various social and emotional perks of being somebody's friend). Either of these tactics suggests to the person doing the short shrifting that they'll be worse off if they continue to put too little weight on the angry person's interests, and this can motivate them to mend their selfish, neglectful ways.

In other words, in anger, you've got a fantastic tool to protect you from being taken advantage of...that is, if you use it instead of trying to suppress it. Because anger is triggered automatically, stifling it won't make it go away; it'll make it go away and get bigger and uglier. It's likely to leak out at inappropriate times (like in sniping hostility when you speak), and there can be an eventual out-of-proportion explosion, often at some seriously minor perceived "slight," like the person you're angry with not passing a condiment quite zippily enough.

Healthy assertiveness, on the other hand, requires the expression of what I'd call "timely, judicious honesty." "Timely" means expressing that you have unmet needs relatively quickly — as soon as you can after you realize there's an issue.

Being "judicious" means taking an emotionally strategic approach: framing the discussion with how you feel rather than how someone's wronged you. In practice, this means evoking the other person's empathy (saying, "I feel bad when...") rather than using language of accusation or blame ("You do this rotten thing..."), which makes a person feel attacked and motivates them to fight back instead of listening.

The third step, "honesty," is expressing, "Here's what I need..." and seeing whether the other person says they're up for providing it. Then, of course, there's seeing whether they actually will (perhaps with a reminder or two from you if they automatically fall back into their old ways).

If you accept responsibility for being delinquent in expressing what you want from your friend, it should help you cool off enough to do that now in a civil way. If it turns out she isn't genuinely interested in your welfare — that is, in being a real friend to you with all the give-and-take that involves — you can downgrade her accordingly (like from friend to "someone I know"). Of course, you really couldn't be a better friend to her right now — that is, unless you had your jaw wired shut for a month.