Meanwhile, Back at the Ranch... | The Source Weekly - Bend, Oregon

Meanwhile, Back at the Ranch...

It was once an over-grazed range that became the home of Rajneeshpuram. Now another type of religion occupies the space, along with ranchers committed to land restoration 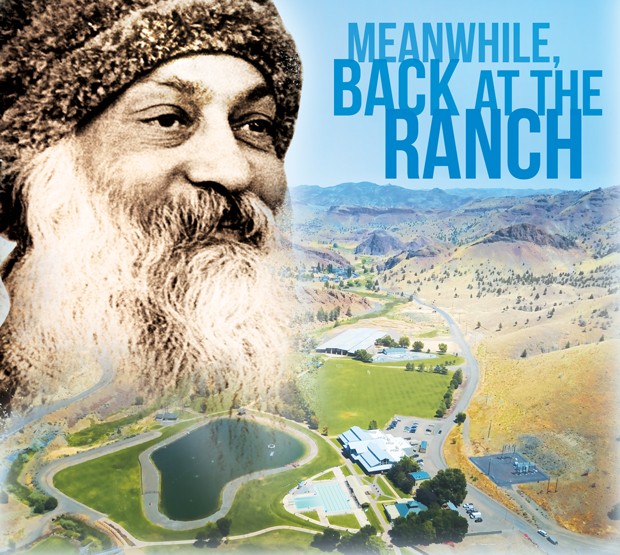 Brian Jennings covered the Rajneesh controversy while serving as news director at KXL Radio in Portland in the 1980s. This year, he headed back to the former Big Muddy Ranch two times, to see the sweeping changes there first-hand.

Madras area rancher Ron Ochs, 88, says it was the most bizarre time in Oregon history. He's one of many Oregonians who have recently re-lived the Rajneesh era, between 1981 and 1985, by watching the popular Netflix documentary series, "Wild, Wild Country."

When we met up with Ochs at his ranch, he was more than willing to talk about the influx of thousands of followers of the Indian guru and mystic, Bhagwan Shree Rajneesh—later known as Osho—at the Big Muddy Ranch near Antelope. The guru preached peace, goodwill and free love, and attracted a large following of Westerners, starting with his days in Puna, India.

"Given the way they acted around here and what they did, I thought it was a tribute to the restraint of the local populace that nobody ever took a shot at him," Ochs stated in talking about the guru.

Ochs says he would frequently watch Bhagwan and his followers drive to Madras, past his ranch on Highway 97, in one of the nearly 90 Rolls Royce sedans the guru owned. "There were so many people that he made so mad after they came here and started throwing their weight around."

Ochs says armed guards were visible in front of Bhagwan's sedan, front and back. "It was like he was afraid of being shot."

After purchasing the ranch in 1981, Bhagwan and his followers established their own police force at the ranch and effectively took over the nearby small town of Antelope. In a show of intimidation, armed followers would roam and patrol the streets in what is now a near ghost town-like setting.

Today, a commemorative plaque of the era is found along the main street in Antelope, a town where many of the buildings frequented by locals and cult followers are now abandoned.

Land issues began to pop up not long after the arrival of the Rajneesh and his followers, called sannyasins. The Rajneesh wanted to close a county access road to locals, and the issue nearly came to blows as ranchers vowed to drive through any barricades the Rajneesh threatened to establish.

Rajneeshpuram's second-in-command, Ma Anand Sheela, was often seen wearing a sidearm as she walked and viewed activities along the controversial road. While the Rajneesh were armed, so were ranchers.

"It was the first time I heard her referred to as the brown-eyed bitch—and she was," said Ochs.

Prosecutors found that the cult even wire tapped their own people with surveillance devices at public telephones on the ranch. Arson plots of government facilities were also conceived but not successful. It was clear Rajneesh leaders felt their future hinged on changing and controlling the political landscape. They began busing in homeless people to Madras and other points, in an effort to boost voters sympathetic to their cause.


"That night I became ill. By the next day I was extremely ill. By the third day I felt like I was on death's doorstep." —Billie Kuenzi tweet this

After all the drama, it was a poisoning plot that captured international headlines. In an effort to keep locals from the polls and ultimately to control the county election, 10 restaurants in The Dalles were targeted, ensuring Rajneesh candidates would be elected.

Billie Kuenzi was 19 years old at the time of the poisoning plot in September 1984. Ten days before her wedding, she returned to her home in The Dalles, the Wasco County seat, and went to a local fast food restaurant to grab a salad with her mother. Little did she know it was laced with salmonella investigators later found to be cultured at a lab at the Rajneesh ranch.

"That night I became ill. By the next day I was extremely ill. By the third day I felt like I was on death's doorstep." Kuenzi says she experienced great pain and by the time she got to the hospital she discovered the place was full of other people suffering the same symptoms.

In all, 751 people were poisoned and 45 hospitalized in what today remains the largest bioterror attack on American soil.

"I was writhing and screaming in pain, and my mom was terrified because I felt like I was being ripped apart," Kuenzi reports. She never fully recovered, she says. The poisoning triggered a life-long health issue that includes Irritable Bowel Syndrome. "Knowingly poisoning someone is a horrible thing," she says.

The year 1984 was a pivotal time at the Rajneesh ranch. Federal investigators began closing in with concrete evidence that the ranch had cultured the salmonella, building a case against the top followers of the controversial guru.

By 1985, second-in-command Sheela fled and was found in Europe. Following extradition, she served only 29 months of a 20-year sentence on charges related to the restaurant poisonings, assault, conspiracy to commit assault, wire-tapping and setting fire to a county office. She now lives in Switzerland where she has operated nursing homes.

Baghwan denied involvement but fled soon after Sheela. He was apprehended in one of his DC-3 planes in Charlotte, N.C., and charged with immigration fraud.

He eventually paid a $400,000 fine and returned to India, where he died five years later, never having been proved as having a direct hand in the poisoning or other criminal activity. 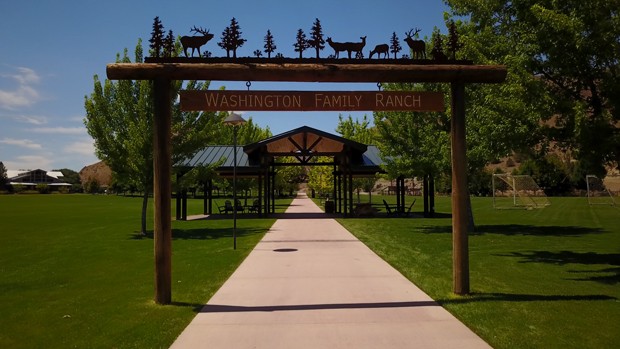 The U.S. government seized the ranch, eventually selling it to the company owned by Montana-based billionaire Dennis R. Washington. The company eventually donated the ranch to Young Life International, a Christian-based organization focusing on teens. Today, the Washington Family Young Life Ranch hosts up to 8,000 teenagers from around the world for week-long summer camps. An emphasis is placed on relaxation, activities and fellowship—but it's no ordinary camp. Modern hotel-like dormitories tower over the space. There's also a large sports center where the Rajneesh once staged mass meetings. There's also an extravagant waterpark, entertainment and medical facilities, extensive maintenance facilities and lodges and home sites that house a permanent staff of employees.

"When people come out who know the past history, they are so excited to see what's going on here and what impact we're having on kids and on the world," says Andy Squires, Young Life Camp Manager.

The Big Muddy, past & present 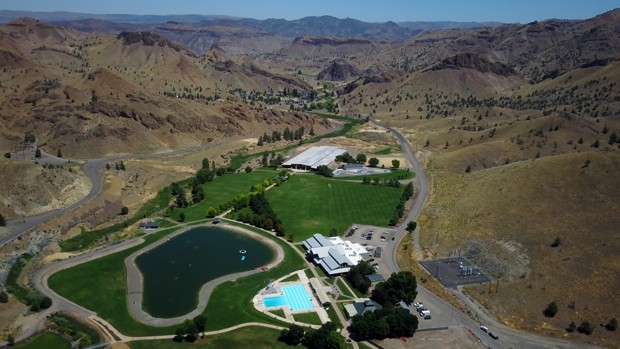 Meanwhile, the site continues to operate as a working ranch. Historically, the 64,000-acre ranch was known as the Big Muddy Ranch, a sprawling cattle ranch from the late 19th- to the mid-20th century. Like many ranches of the era, it was over-grazed, creating much bare, dry ground, and creeks void of vegetation, according to present ranch manager, Peter Grubb.

"Muddy Creek is a section of land that has been over-grazed over the last hundred years with sheep and cattle, so it was in pretty bad shape when we took it over."

In the hot, high desert, water is king, so current ranch managers have placed a strong emphasis on capturing and preserving water supplies. Spring water is stored in numerous small holding tanks throughout the ranch and much emphasis has been placed on land restoration.

They do that with modern cattle management techniques and planting hardwoods along creek beds, which provides shade and conserves water. Cattle are frequently rotated through pastures, preventing grazing damage to the soils. Cattle waste enriches the soil, helping grasses to grow. Growing grasses helps restore moisture to the land, improving ground water. When Young Life acquired the ranch, there were only seven pastures on its landscape. Today, there are 45.

Large reservoirs provide irrigation to alfalfa and grass crops, which feed cattle, whose herd population is controlled so their numbers don't overwhelm the land. 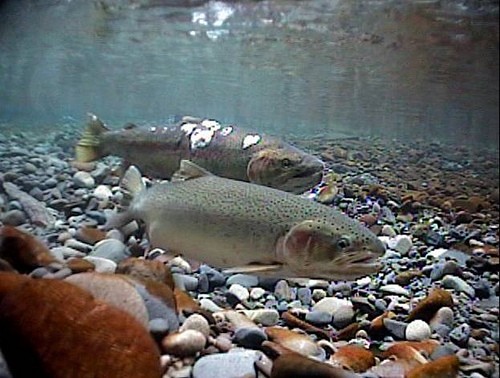 With rich pastures, wildlife also benefits. Sometimes, ranchers view wildlife as a nuisance, worried they'll damage their crops. Young Life ranchers maintain that what's good for cattle is good for wildlife and vice versa. Herds of mule deer and elk can often be seen throughout the ranch, which also operates a guide service for hunters and fishermen along a section of the John Day River adjacent to the ranch.

Containing one of the few remaining wild steelhead runs in Oregon, fishing is a big deal on the John Day. The lower three miles of Big Muddy Creek, which runs through the heart of the ranch, has become a prime spawning area for salmon, steelhead and native redband trout in the John Day watershed.

"We put plantings there to protect that section of the creek," Grubb says. Root systems spread laterally and connect the stream channel with the floodplain. The ranch plants about 1,500 hardwood trees each year, growing them in a nursery-like setting.

"What it comes down to is decreasing water temperature and increasing water storage—and water storage in the desert is huge," says Grubb. The intent is to collect and store as much water as possible during the winter, so it releases more slowly during the hot summer months. Summer-run steelhead rely on the cooler water starting in July, August and September, when temperatures are often over 100 degrees.

Arguably, few western ranches have the history that has been written at the Big Muddy Ranch: abused in the days before ranch practices changed for the better, controversial in what many consider the dark days of Rajneeshpuram, and inspirational in a conservation turn-around in more recent years.

Brian Jennings is a feature reporter for Central Oregon Daily. See his "Great Outdoors" reports every Wednesday on KOHD-TV at 6 pm and KBNZ at 7 pm.