Get to know local singer/songwriter Ella Peterson and then listen to her new song, "Over The Edge"

Bend local Ella Peterson releases folky, bedroom-pop songs under the name Lupine. I stumbled across her music at the beginning of the fall while searching for new tunes from Bend on Bandcamp—and I was super excited with what I found.

The 17-year-old only had two songs and an EP titled, "Clover," released at the time, but that was more than enough to be sold on Peterson's talent. Her writing is exceptionally strong and vivid; whether she's detailing the nature around her or singing about the powers of anxiety, everything in her music comes through as if it was your own experience. It seems Peterson has a strong attention to detail and a knack for picking up on all of life's metaphors and symbols, as she's able to write out moving songs that are personal to her, but relatable for us all. Peterson's voice possesses a unique tone as well, one that she just used to crush a cover of Miley Cyrus' "Hate Me" that you can find on Instagram. All of this is what makes Lupine an exciting artist to keep an eye on in Central Oregon. 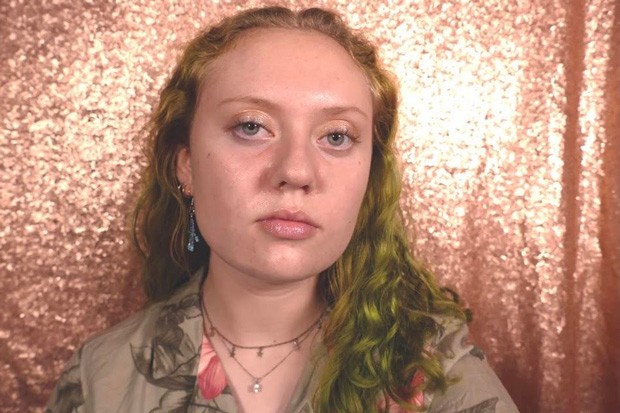 Read our Q&A with Peterson below as we talk about her and her music, plus the latest Lupine song, "Over The Edge."

Source Weekly: You released your first project back in July, but how long have you been making music? And were you excited to put that out?

Lupine: I was really excited to release it because it was something new and exciting to do. I've been making music ever since I could remember. I started playing piano when I was four and I was in band in middle school. I learned how to play guitar and bass in middle school as well, and that's really when I started to write my own music.

SW: What made you choose the name Lupine?

Lupine: I chose the name Lupine because it felt like a name that fit me well as a person, and the flower is pretty common here in the PNW so I thought it would work well as my "stage name."

SW: I love the meaning behind your song "Strangers In My Backyard." Can you elaborate on that idea of how growing up changes your surroundings and what the backyard represents to you?

Lupine: The song is actually about my yard growing up. I used to have a huge backyard with tons of wild flowers and grass. I would chase my dogs around and we spent the summer outside running around in it. The lot that it was on has been sold, and a house is being built on it so the song has a literal meaning as well as a message about how you grow up and watch things around you change without being able to stop it.

SW: You're releasing a new song on the 10th, and in your Bandcamp message you mentioned that it is "angry-ish." What's the song called and what is it about?

Lupine: The song I'm releasing is called "Over The Edge." It's about being let down by people you wouldn't expect it from, but knowing not to trust those people anymore. It embodies my experience through work, school and anything in between where I've trusted someone I probably shouldn't have.

Listen to "Over The Edge" and the rest of Lupine's music on Bandcamp, Spotify and Apple Music.