Coffee meets brewery at the new Beer Club on Galveston

Lemon pistachio is probably not the first flavor that one might gravitate toward when ordering coffee, so I had to try this one out for myself. The barista behind the counter assured me that it's surprisingly complementary to the steamed macadamia milk and full-bodied espresso.

Made with lemon zest and pistachio paste, the simple syrup at Megaphone Coffee offers a hint of sweetness and brightens up a typically rich beverage. Apprehensive at first, I was pleasantly surprised to be enjoying a citrus-flavored coffee. The unconventional latté syrup was created by Foxtail Bakeshop for Megaphone customers. The two establishments have relationship history; both were located on Columbia Street until the landlord terminated leases for the entire building in 2017, requiring all occupying tenants to relocate.

In the meantime, Megaphone continued to roast and distribute its coffee wholesale to local coffee shops including Spoken Moto and Companion Coffeehouse, along with grocers that include Market of Choice and Newport Market. It wasn't until the Galveston Street vacancy presented itself, nearly a year later, that they were able to rebuild a home base serving direct to consumers.

The owners of Megaphone Coffee and Boss Rambler Beer Club decided to join forces in creating a unique hybrid space for coffee connoisseurs and craft beer enthusiasts. It exudes a modern co-working feel in a service-based institution. Patrons can enjoy a cappuccino and pastry while lounging on the patio or working from inside their renovated and airy space. A minimalist approach to the coffee bar's design allows for customers to share face-to-face conversations with baristas. In fact, it's the reason owners Pete West and Cole Billings decided against traditionally bulky espresso machines.

West and Billings, who originally met in Santa Cruz, Calif., both come from an extensive background in the coffee industry. They wanted to create a place where customers could spend time relaxing as well as socializing. There's a modern coastal aesthetic with the exterior's white shiplap and the patio's yellow bar stools and turquoise Adirondack chairs. Inside, a contemporary spin on mid-century modern creates an inviting ambience. 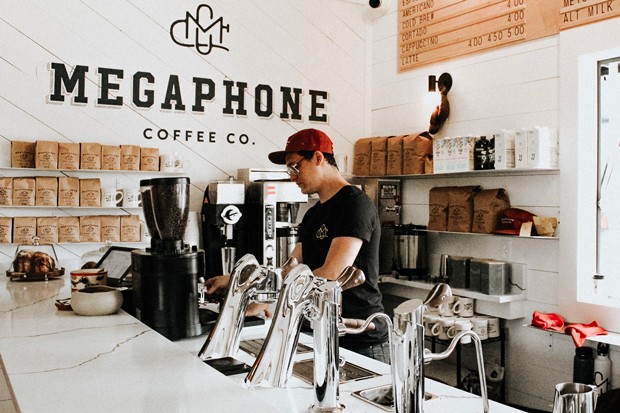 Megaphone serves coffee from 7 am until 3 pm, daily. along with pastries provided by Foxtail Bakeshop. The Scoutpost mobile cart serves up their famous sandwiches and donut holes adjacent to the Beer Club building.