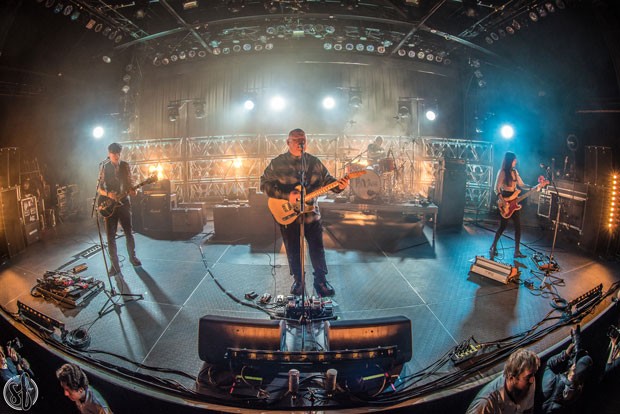 Certain bands epitomize a specific genre—defining a sound for their generation and laying the ground work for those who come next. The Pixies sit on that throne at the groundbreaking beginning of alternative rock—paving the way for grunge and the likes of Nirvana and Pearl Jam. If you have a special place in your heart for alternative rock, odds are your CD collection (yeah, CDs, remember those shiny silver discs?) contains The Pixies' 1989 album "Doolittle" or 1988's "Surfer Rosa." Today, your Spotify streams their most recent album, "Head Carrier," and you still know all of the words to "Where is My Mind?"

"It's the good shows that I love most about rock and roll," Pixies' guitarist Joey Santiago says. "The perfect show is very elusive. Four members have to be right on it at the same time and that's a rare, rare occasion. When that happens, it feels great. When it doesn't, that's par for the course and it's still a good time. What I enjoy about rock and roll—the old stuff brings memories and the new stuff brings excitement."

Santiago joins Black Francis and David Lovering as the remaining founding members of Pixies. After Kim Deal left the band, they added Paz Lenchantin on bass. Some may feel Lenchantin has big shoes to fill in replacing Deal, but she holds her own in the band and brings a wealth of rock 'n' roll experience. Lenchantin played bass or strings for A Perfect Circle and Queens of the Stone Age, among others before joining Pixies in 2014.

"She's very positive," Santiago says of Lenchantin. "We just have a good time with her. Off stage and on stage, she's just a consummate pro. She just has a lot of fun. Sometimes she reminds us, 'Yeah this is fun, man.' She's got a great energy, very, very creative. We're writing an album right now and all of her suggestions are right on point."

As for the next album, Santiago says they won't know what it will sound like until it gets recorded, but on his end, he wants it to sound as raw as possible. They don't have a game plan for the sound specifically, at least that he was willing to confide to a music writer at this time. For the time being, we can all look forward to their show at the Les Schwab Amphitheater to get our fix of alternative rock.

Pixies stopped creating setlists years ago, according to Santiago. Now, they call out what they think they should play next on stage, giving their performance an aire of spontenaity. Will they play "Wave of Mutilation?" What can concertgoers expect on this tour? At this show, fans can expect 75 minutes of the Pixies playing anything they want, one song right after the other, covering all points of their career. The Pixies bring their alternative rock meets pop meets surf rock to the stage, evoking memories of the past while continuing to evolve their sound and skill.

While touring may be old hat to these rock and roll veterans, Santiago still looks forward to hitting the road and visiting friends on tour.

"I'm excited about getting out and every day being different, about traveling around," Santiago says. "I welcome anything. I welcome being exhausted. I welcome not knowing where I am."