Memories of the Volcano | The Source Weekly - Bend, Oregon

Memories of the Volcano

A local woman's experience during the Mount St. Helens eruption, which sees its 40th anniversary May 18

May 17, 2020
2 comments
While Yakima residents sat in church on May 18, 1980, the world outside went black. Lightning slashed the sky and the air shuddered and filled with fine volcanic particles. Mount St. Helens, 85 miles to the west, had erupted with a violent explosion at 8:32 a.m.

I was riding my bicycle in the countryside southwest of Yakima, seven miles from home, when the cloudless blue sky began to darken. Zigzags of lightning appeared to the west and thunder boomed. I pedaled to the home of a friend and parked my bike in his garage. We sat on his back stoop to watch the storm roll in. An eerie dark cloud engulfed us, like a curtain pulling itself across the sky. In the trees, we heard a strange pattering sound. Not rain. I held out my hand and collected a fine light-colored sand. 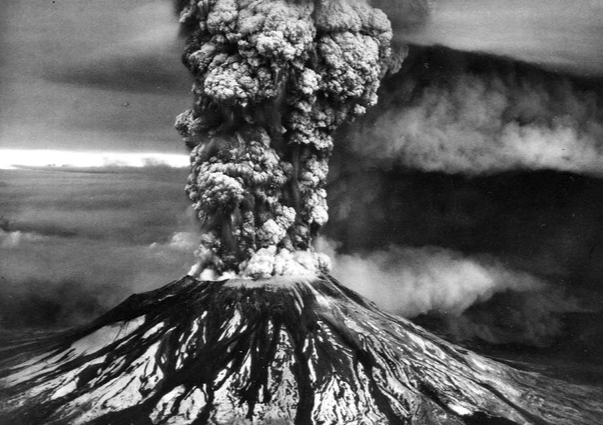 Instantly, we knew what had happened. The volcano near Vancouver, Wash., had spewed steam for weeks. But no one imagined an eruption that could reach as far east as Central Washington.

“It’s like the eclipse (of February 1979), only darker,” my friend said. I thought it looked like the end of the world.

Horses in the neighbor’s pasture galloped in panic and a stray sheepdog wandered into the yard and huddled close to us. In the surreal darkness, cars slowed and made their way through the gritty storm with their headlights.

We turned on the radio and hunted for a news bulletin. Nearly every station was broadcasting as usual, while outside the sky was falling. Finally, station KIT began to cover the emergency and told people to stay indoors. 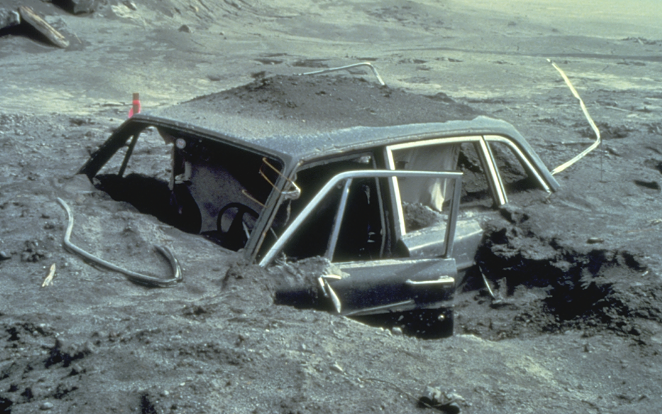 About 1 p.m., the sky lightened enough for me to start home on foot. I hitched a ride with a truck driver who stopped often to wipe the ash from his windshield.

“Can’t use the wipers,” he complained. “The stuff just jams ‘em up.”

By 3 p.m., the sky looked like midnight again. About 5 p.m., my little house shook with another explosion from the distant volcano. I wondered if emergency folks in Yakima thought to warn law enforcement in Ephrata and Spokane, where the ash was headed.
Through a filtered sun, Yakima residents began digging out of the pale, putty-colored ash. Dust masks and bandanas, worn outlaw style over the nose and mouth, became instant fashion. tweet this

The next morning dawned powdery white, like a spring snowstorm. Through a filtered sun, Yakima residents began digging out of the pale, putty-colored ash. Dust masks and bandanas, worn outlaw style over the nose and mouth, became instant fashion.

In the outlying areas, residents quickly depleted reservoirs as they watered down the dusty ash. “First they tell us to hose everything off, and now they’re threatening to shut off the water,” my neighbor grumbled.

Yakima police clamped a 15 MPH speed limit on city streets to keep the powder from swirling into the air. Some residents, angry at speeders, built home-made speed bumps out of dampened piles of ash.

State officials closed Highway 90 over the Cascades and eastbound traffic had to travel along the Columbia River. In Yakima, schools and businesses closed, first for one day, and then another, while city officials figured out what to do with tons of sand-like material. By mid-week, they shut down the central business district and brought in workers and equipment from Seattle and Portland. The workers swept the ash from building roofs into the streets and carted it to the edge of town.

Cars, choking from clogged air filters, became the first victims. In the orchards, growers used overhead sprinklers and wind machines to knock the dust off cherry and apple trees. The eruption dropped barely an inch of ash in one dramatic day, but the hazy skies lingered through late spring and altered the lives of everyone in the Upper Yakima Valley.