Deaths related to the use of methamphetamine have skyrocketed in Oregon, from about 50 in 2008 to 412 in 2017, according to a recent drug threat assessment report. 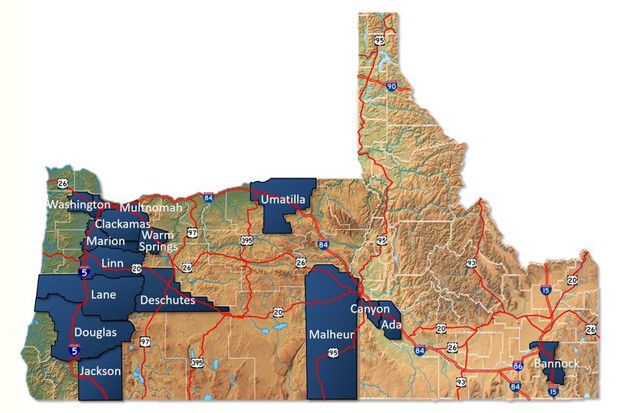 The report states the increase is due to many factors, including a drop in the price for meth, mental health issues, socioeconomic disparities and a more potent version of meth.

Bailey said the County had 256 arrests in 2017 for meth-related incidents—including furnishing, supplying, buying and receiving the drug—and in 2018, had 225 arrests.

Although arrests for meth went down, the death toll has risen across the County. From 2006 to 2008, information from the Oregon Health Authority shows there were no deaths in Deschutes County related to meth. From 2009 to 2011, there were two; 2012 to 2014, there were five; and from 2015 to 2017, 12 people died from meth-related causes. Multnomah County had 124 deaths during that most recent span—the most in the state, according to OHA.

According to the survey this year from Oregon and Idaho law enforcement, meth accounted for the highest proportion of responses by law enforcement to specific threat indicators, including greatest overall threat, connection to violent crime and property crime.

Bailey said the Sheriff's Office doesn't have an exact figure on crimes related to meth use, but he said they're related.

"There's absolutely a correlation with property crime, burglaries and probably drugs and meth and that whole issue," Bailey said. "We do know that all of the property crimes are related to stealing to sell that property to buy meth."

“That’s what modern law enforcement—and the District Attorney’s Office—is focused on, trying to break the cycle and find ways to divert people so that they can get out of the cycle.”—Sgt. William Bailey tweet this

In 2005, Oregon became the first state to require a prescription to purchase medicines with pseudoephedrine, an ingredient used in the production of meth. The HIDTA report said that now, most of the meth coming into the area is imported from Mexico, reconstituted from powder or liquid in California methamphetamine labs into crystal and then brought to Oregon. Bailey said it comes into the County via Hwy 97 or in aircraft. The Sheriff's Office battles the meth war—and other drugs—with its patrol deputies, its street crimes unit and three K9 units.

Another tool in the County's fight against illegal drugs and addiction is the Goldilocks Crime Prevention Initiative, started as a pilot program in 2017 by District Attorney John Hummel. The program is a three-tiered initiative that targets the intervention that's "just right" for each criminal suspect.

Hummel said in an email that Goldilocks was created because historically, our community was not tough enough on big time drug dealers, and were too tough on people who were merely using drugs.

Level one, called "Clean Slate," allows for pre-charge diversion for people suspected of possession of a controlled substance. Eligible people are screened and placed—depending on a risk assessment screening—in either Level 1 or Level 2. Level 1 people are not charged with a crime and receive referrals to addiction services. Level 2 people are directly referred to a participating primary care provider at either Mosaic Medical Group or La Pine Community Health Center—both federally qualified health centers. If the people in this group participate and substantially benefit from their treatment and remain crime-free for one year, they are not charged with a crime and their original arrest record is expunged.

The next tier, "Boost," is for people who were either not successful in Clean Slate or were charged with a more serious drug crime than possession. These people are prosecuted in the "traditional" criminal justice system model, and if considered eligible and subject to availability, may enter the Circuit Court's Family Drug Court program.

In "Deter," the DA seeks the maximum prison sentence for people with a history of drug dealing who are charged with a commercial drug offense or with selling drugs to a minor.

According to the DA's office, the first year of the program eliminated the need for approximately 256 court appearances and saw 81% of Level 1 and 57% Level 2 people not reoffending. And, two major drug dealers who were caught by law enforcement are being prosecuted by the U.S. Attorney.

Bailey said the program is geared to help stop the cycle of drug addiction.

"That's what modern law enforcement—and the District Attorney's Office—is focused on, trying to break the cycle and find ways to divert people so that they can get out of the cycle," Bailey said. "Because I totally can understand once you get in there, it can be very difficult —addiction is a tough thing."