Midwest Italian that Hits the G-Spot 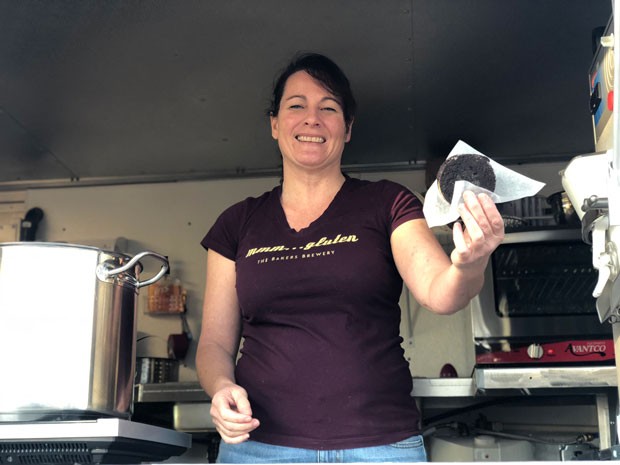 I grabbed a ravioli—golden brown, cheese-filled and deep-fried to crispy perfection, using the corner to scoop it into the accompanying marinara sauce. As soon as the flavors touched my tongue, I was transported back to the humid Midwest during a weekend at the Taste of Chicago, eating until my jeans were too tight.

Toasted ravioli originated in St. Louis, Mo. There are two competing origin stories. The first tells how a chef accidentally dropped a ravioli into the fryer. In the second, a chef mistook oil for pasta water and dropped the ravioli in. I asked a friend in St. Louis whether she ate toasted ravioli while living there. The response: "Hellz yes! In Mo, you have to have it filled with meat."

The chef behind this local toasted ravioli is Wendy Hickey of G Spot Foods and Catering. She worked in Italian restaurants in St. Louis throughout high school and college, but only found her passion for the kitchen after practicing law for 19 years.

"I always cooked for people and decided to go to school to learn pasta," said Hickey. "It was cathartic. You can take stress out on dough and it's beautiful when it comes together." She attended culinary school in Denver, Colo., and at Academia Barilla Parma, Italy, and Cast Alimenti in Brescia.

The Italian menu at G Spot includes pastas, sandwiches, soup and gelato. When I was deciding what to order, I chatted with Hickey about the cannelloni, a pasta filled with prosciutto, house-made ricotta, parmesan, mushrooms and zucchini, topped with half béchamel and half marinara sauce. It's finished with a single basil leaf to mimic the Italian flag.

"I don't like basil," Hickey told me, "I like purple basil but not the green." I laughed—I couldn't imagine an Italian chef not liking basil.

Three jars at the front of the truck represent an interesting social test in seeing which one gets the most tips. Each represents a different world leader, including Canadian Prime Minister Justin Trudeau, Italian Prime Minister Giuseppe Conte and French President Emmanuel Macron.

Hickey tries to make as much as she can from scratch, including pasta, sauces, Italian dressing and giardiniera, a spicy Italian relish with pickled onions, peppers and carrots. She really shines in capturing Midwest Italian. I'd be happy eating the Italian hoagie with capicola, ham, salami, mortadella, mozzarella, arugula, giardiniera aioli and Italian dressing any day. Served on a Sparrow hoagie, the combination of meats with those vinegar-based toppings is gratifying. Too often, sandwiches are high-centered with meat—but Hickey knows how to balance the amount of meat to bun. 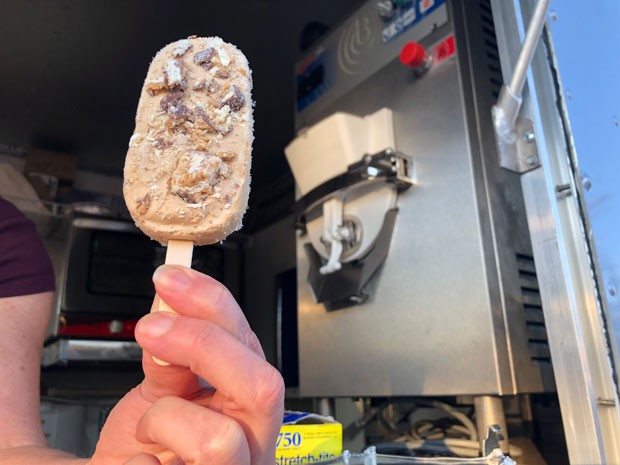 Cold weather can deter some people from eating gelato this time of year, but not me—especially since Hickey learned to make gelato in Italy. I had to try the gelato sandwich, made with Bridge 99 Bull Trout Stout chocolate cookies and espresso gelato. The soft, generously portioned cookies melted in my mouth and didn't crack when I bit into them. Chocolate and coffee, like cookies and milk, are even better paired. The desserts, including the espresso brownie , roulade cake, gelato half pints and popsicles are also available to go.

The G Spot Foods truck opened for business over the summer, on rotation at Bridge 99 Brewery and also traveling to events. Hickey's now in a permanent location next to 9th Street Village and the DIY Cave—an area that could soon see even more traffic with the opening of Bevel Craft Brewing, slated for March.

Hickey plays with the menu frequently, trying to discover what the community really wants. Each week she experiments with a different pasta, soup and sandwich. She tries to always have a vegetarian option, and may soon offer vegan pasta.

As a sommelier in training, Hickey also hopes to host wine dinners in the future. "The first four weeks of culinary school you study wine," Hickey said. "I drank wine from nine in the morning until two in the afternoon." What an amazing way to start a second career.