A new generation of community leaders on the rise 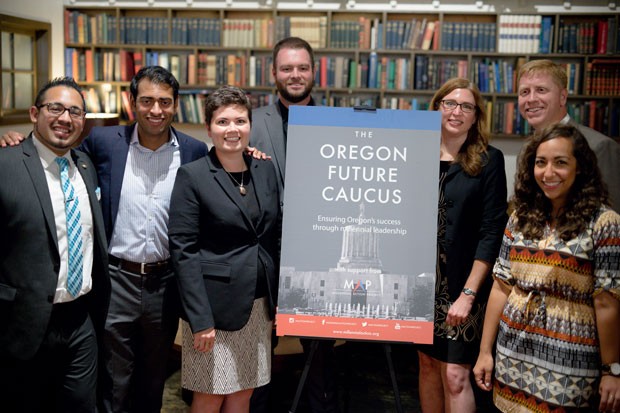 As another election approaches, reports of the elusive millennial voter and what effect they could have on the 2018 midterms have started to crop up again. Could this be the election that voters born between 1981 and 1998 turn out in record numbers, surpassing the number of baby boomers at the polls?

Still, it doesn't mean civic engagement among the under-40 sect isn't on the rise.

The Millennial Action Project, launched in 2013, aims to bring young policymakers from both sides of the aisle together. The national, nonpartisan nonprofit provides millennial leaders with tools and resources to develop productive partnerships across party lines and pass legislation.

In addition to the Congressional Future Caucus, MAP launched 10 additional state Future Caucuses in 2017, making a total of 25, with a goal of 30 by the end of the year. The Oregon Future Caucus, launched at the end of September by Oregon Rep. Julie Fahey (D-West Eugene/Junction City), is the latest state to join the ranks. The caucus has zeroed in on issues members think they can come to a bipartisan solution to in the 2019 legislative session, said Fahey, including increasing the supply of housing, addressing student loan debt, criminal justice reform and early childhood education.

"It's a part-time position and the pay is not very high, so when you're mid-career and/or you have a family, it's a pretty difficult job to do—especially when you need to run a competitive campaign to get here." —Julie Fahey tweet this

Fahey, who's 40, said seven state legislators attended the first meeting in January. Two lawmakers interested in joining the caucus had recently turned 41, so they agreed to bump the age cap up to 42 years old. Of the 90 legislators in the Oregon House and Senate, only eight made the age cutoff for the Future Caucus, chaired by two Democrats and two Republicans.

"I think that really shows the barriers that younger people face in running for state legislative seats in Oregon," said Fahey. "It's a part-time position and the pay is not very high, so when you're mid-career and/or you have a family, it's a pretty difficult job to do—especially when you need to run a competitive campaign to get here."

In the U.S. Congress, an individual must be 25 years old to run for a representative seat and 30 years old for a senate seat. In Oregon, the minimum age for the senate or house is 21. Today, the oldest millennials are 37 years old; the first being able to run for Congress in 2006. Yet, according to a 2018 Congressional Research Service profile of the 115th Congress, the average age of members of Congress is "among the highest of any Congress in recent U.S. history," at 57.8 years old for representatives and 61.8 for senators. The youngest member of Congress is 32-year-old Rep. Elise Stefanik (R-NY), but that torch could be passed to 28-year-old Abby Finkenauer, the Democratic candidate for Iowa's First District, if she wins on Nov. 6.

According to its website, The Millennial Action Project estimates that 200 millennials have run or are running for the 116th Congress. Twenty of the 50 Millennials who ran in the primaries won their races.

I recently attended the Bend Chamber's first Bend Young Professionals Summit. During a roundtable meet and greet with City of Bend employees, I was struck by how many young faces are working in departments ranging from Growth Management to Communications. According to the City, of the 678 City government employees, 42 percent are under the age of 40.

Katy Brooks, Bend Chamber president, said Bend Young Professionals aims to develop leadership skills early, through monthly socials, professional development events and networking opportunities like the YP Summit. The network, which has a participant base of about 800 under-40 somethings strong, is more than just a resource for career-minded young adults—it's about cultivating the next generation of community leaders and lawmakers.

"We look at it as community succession planning," said Brooks. "When you look at Bend's leadership and how long so many folks have been doing great things for this community, you really have to take a look back and say, alright, how did they start and how do we perpetuate that?"

Local young professionals are looking for a way to advance their careers and "plug in" to community issues, said Brooks, and really crave and value a place to meet other ambitious young adults in their community.