Local alpinists advocate for more tracking of the glaciers around us

Dropping over the edge of the snow-filled mountain bowl, I feel the soft snow sliding under my skis as I accelerate. Leaning into my edges, I initiate turn after turn, controlling that acceleration—and in the process, spraying small waves of snow across the slope. My legs are engaged, and I feel their power pushing into the powder that extends out in front of my ski tips, uninterrupted until the trees at the bottom of the bowl, still 400 feet below but approaching quickly.

I stop at the edge of the trees and holler up to my ski partner, Aaron Hartz. Looking up, I can see the line I've drawn down the bowl, an imperfect sine curve undulating down the slope. 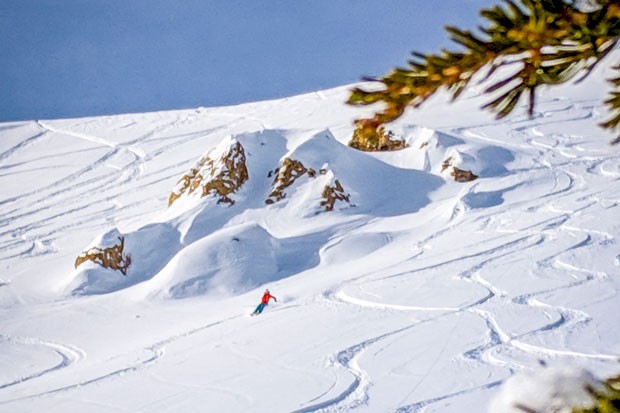 Hartz drops into the bowl, going fast. He's clearly comfortable as he makes his turns. He's an artist, using his skis as his quill. The line that he draws demonstrates the flaws in my own. Once again, I'm deeply impressed with my friend's ability to ski beautifully.

He pulls up next to me. "Well, that was worth getting up early for!" he says, a wide smile radiating from under his goggles.

We take off our skis and pull our climbing skins onto their bases, preparing to head back uphill for another lap. This is our time to chat and share our enthusiasm around new ideas, of which Hartz rarely lacks.

He's a guy who's just as impressive as his turns. In Bend, he works as a guide and avalanche educator, teaching groups of people how to stay safe in the backcountry through Oregon Ski Guides, with whom he he's worked for nine years. He also works as an observer with the Central Oregon Avalanche Center and runs Hartz Science Explorations, a company focused on working with scientists in order to collect data and help with projects in remote, challenging-to-access terrain.

Hartz is deeply invested in snow, both from a scientific perspective and a personal one. As we ski uphill, our conversation drifts from the quality of the skiing to the future of snowpacks. Pointing out the Three Sisters volcanoes, he shares that over his years living in Central Oregon, and through his work at the confluence of science and the mountains, he's started looking at science closer to home and asking about the health of the glaciers on the volcanoes of Oregon. He found that while there was observational evidence that the glaciers in those peaks are melting, no one is tracking them scientifically. In fact, of the hundreds of glaciers in the contiguous U.S., only a fraction are being monitored by the U.S. Geological Survey.

He found this to be very concerning. So, alongside his friend and colleague, Dr. Anders Eskil Carlson, who holds a doctorate in glacial geology and is founder of Carlson Climate Consulting, Hartz has started pushing for more monitoring of glaciers in the lower 48, particularly in Oregon.

The glacial recession in Oregon is concerning because the city of Bend is like many other cities situated near the mountains—highly reliant on the water from the snow and glaciers on those peaks for its water supply. Hartz and Eskil shared in an op-ed for The Oregonian, that "Oregon's glaciers are ... vital parts of local to regional economies. Glacier meltwater sustains rivers through the summer that would otherwise run dry." They went on to say, "Oregonians concerned about agriculture, animal husbandry, fisheries, tree harvesting, winter snow recreation, and hydroelectric power should let their policymakers know that our state needs a concerted effort to study and protect our glaciers."

I could not help but agree with him. We also agreed that understanding the problem was not a solution to the problem. We need to enact climate policy, such as the Climate Change Action Plan, just passed by Bend City Council, which will help us preserve those resources and hopefully, monitoring will show the progress that we have made.

So, as we reached the ridge and transitioned to ski back down to the trees, I looked out at those peaks, covered in frozen water and I tried to imagine them barren, and in turn, the city of Bend dealing with major water shortages. It did not seem to me a future in which we want to engage.

Graham Zimmerman is a professional alpinist and storyteller based in Bend. He's a partner at locally based Bedrock Film Works, where he strives to share stories about the power of the outdoors and the importance of protecting our climate and natural spaces.