ost for some in the outcry over President Donald Trump's defense of "beautiful" Confederate monuments was that one week later, Interior Secretary Ryan Zinke submitted a report to the White House that reportedly recommends shrinking the boundaries of three entirely different types of monuments—including the Cascade-Siskiyou National Monument in southern Oregon.

In a joint statement, Sen. Merkley described the review of public lands monuments as a "legally dubious attack on American treasures that belong to the people."

Sen. Wyden said, "I will fight this misguided effort to lurch backwards after so much progress and I will keep fighting this administration's ongoing assaults on our public lands."

he initial Cascade-Siskiyou National Monument, designated by President Bill Clinton in 2000 under the Antiquities Act of 1906, was the first monument set aside solely to preserve biodiversity. Located at the intersection of the Siskiyou Mountains, Klamath Mountains and the Cascade Range, the area contains diverse ecosystems, about 200 bird species, endangered and rare wildlife such as the Pacific fisher, and plants that grow nowhere else on Earth.

"If we don't step up now, I worry about what might be next—logging at Green Lakes, Paulina Peak, the Metolius River?" — Erik Fernandez, Oregon Wild tweet this

In January, President Barack Obama expanded the monument, based in part on an extensive scientific review that concluded the initial monument wasn't large enough to safeguard the biodiversity it was created to protect. The 48,000-acre expansion—designed in part to increase habitat connectivity and protect watersheds—was still about 20 percent less than proposed by scientists.

The decision to increase the size of the monument followed an extensive public process, including a months-long written comment period that drew 242,000 comments in support of expansion. Numerous public meetings were held across southern Oregon and northern California, including four well-publicized events that attracted hundreds of citizens.

According to Erik Fernandez, wilderness program manager for Oregon Wild, "The Obama process was incredibly thorough, going through many drafts of the proposal based on input from numerous stakeholders. They set a new high bar for how much public process and vetting a proposal has to go through."

U.S. Rep. Greg Walden (R-Hood River) saw the process differently. Shortly after Obama announced the expansion of the Cascade-Siskiyou monument during his last month in office, Rep. Walden issued a statement saying the process "was rigged from the beginning," adding that he would "work with the Trump Administration to do what we can to roll back this midnight expansion."

resident Trump issued an executive order this April, instructing Zinke to conduct an unprecedented review of existing national monuments. Zinke echoed Rep. Walden's concerns about the need for more public input, issuing a press release saying that his decisions on national monuments would depend in part on a formal public comment process that "finally gives a voice to local communities and states when it comes to Antiquities Act monument designations."

The public comment period lasted 60 days, during which the Department of the Interior received more than 1.2 million comments that Zinke acknowledged "were overwhelmingly in favor of maintaining existing monuments." A random sample of more than 650,000 of the public comments by the Center for Western Priorities found that 98 percent of comments expressed support for keeping or expanding monument designations.

"Work with the Trump Administration to do what we can to roll back this midnight expansion." — Rep. Walden's reaction to Obama expanding the Cascade-Siskiyou monument. tweet this
Z

inke stated that the other criteria for his monument decision would be "extensive on-the-ground tours of monuments and meetings with stakeholders." Zinke's tour of southern Oregon took place over two days in July, during which he visited the Cascade-Siskiyou monument and met with elected representatives and other concerned citizens. 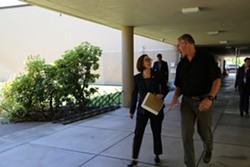 After Zinke outlined his general recommendations for monument reductions (the full report has not been released to the public), Rep. Walden issued a statement stating that he appreciated that Zinke "spent quality time listening to Oregonians on every side of this issue," and that Zinke traveled to southern Oregon so that "all sides got a fair opportunity to have their views considered."

Oregon Wild's Fernandez says he's concerned that the proposed reduction of the Cascade-Siskiyou monument is just one example of the increasing threats facing all of Oregon's public lands. "In the Trump era, the voices and interests of the public mean much less than the donations from polluting industries," he said. "If we don't step up now, I worry about what might be next—logging at Green Lakes, Paulina Peak, the Metolius River?"