Throughout its 40-year existence, The B-52s have been on a mission to get you out of your seat

For 40 years, The B-52s have been bringing a new wave dance party to clubs, ballrooms, theaters, arenas and amphitheaters around the country.

"We just like to keep the energy high, get the audience on their feet and having a good time," said singer Fred Schneider, who's also been known to bang on a cowbell. "I've never heard any complaints about our live show. Never." And that show aims at getting people up to dance, even if it's in a stuffy concert hall where patrons usually sit and appreciate the music. 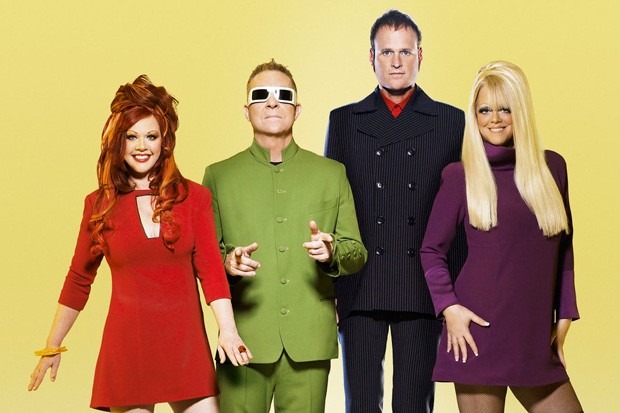 "People usually stand up anyway," Schneider said. "We're not a sit-down band. That's because the band's catchy combo of dance and surf music, filled with unusually tuned and played guitars, is irresistibly danceable. Quirkier songs, such as "Quiche Lorraine" and "Mesopotamia" bring smiles and even more fun.

That sound and the songs, Schneider said, come from the combination of elements brought by each member of the original B-52s lineup: singers himself, Kate Pierson and Cindy Wilson with Cindy's brother Ricky and Keith Strickland on guitars. Sadly, Ricky Wilson died from complications related to AIDS in 1985, at the age of 32.

"Keith and Ricky were very original musicians," Schneider said. "Ricky had three strings on his guitar, sometimes four. He was very creative. He liked Joni Mitchell a lot and used open tuning. He was really admired by a lot of guitarists. Keith plays a variety of instruments and he's amazing at it.

"I wrote poetry in high school and college that was sort of surreal and humorous. I brought that aspect to the lyrics," he said. "Kate liked folk music and played guitar. Cindy liked to sing. She's a creative poet too. We all brought that together."

They brought it together in Athens, Georgia, in 1976, jamming for their first time after sharing a flaming volcano drink at a Chinese restaurant. "I was visiting from Atlanta," Schneider said. "I was really bored living in Atlanta. I decided, after we jammed and saw all my friends, to move to Athens. Then we got together to jam (regularly). There was actually nothing to do in Athens."

The usual view of Athens in the late '70s is it had a thriving music community that produced bands like R.E.M. "Not at all," Schneider said. "There was no scene whatsoever. We had to play the folk club. They didn't want us until we sold out."

The quintet's first gig came on Feb. 14, 1977. "I had some friends who were having a Valentine's party and they asked me if we'd play it," Schneider said. "We didn't even have a name yet. I told them 'We have a gig if we want it.' We took it and played the same set twice."

Taking its name from a '40s beehive hairdo that resembled the nose cone on the B-52 bomber, dressing thrift-store chic and delivering its humorous, quirky music, the group played in Athens and Atlanta.

Then it ventured out to, among other places, New York, where it played now legendary clubs CBGB and The Mudd Club, becoming the first Athens band to get national attention.

"When record labels started coming to Athens and Atlanta trying to get us to sign their crappy contracts, we knew something was going on here," Schneider said. "Once we signed with Warners (Warner Bros. Records), it was 'Here we go.' We've had a good run and we're still going strong.

In the middle of that run, 1989 to be precise, came "Love Shack," the band's biggest hit—a song that Schneider saved from abandonment.

"I wouldn't let it go," he said. "They were sort of giving up on it. I thought 'We've got to do something with this.' Don Was (producer) came up with the idea of putting two parts together. It wasn't anything brilliant. But it worked." Still, "Love Shack" was far from an instant hit.

Schneider can't escape any of the B-52s classics, but that doesn't bother him.

"I spend more time thinking about stage patter than I do about whether I like this song or not," he said. "I want to say something that can get people to go 'What is he talking about?' And then come out with a song."

Expect the upcoming show at the Les Schwab Amphitheater to include the songs fans want to hear and dance to. What they don't include is new material. The band's most recent album was 2008's "Funplex," the disc on which it changed its name from The B-52's to The B-52s.

So you think you can get your dance on and get down with the Hippy Hippy Shake, the Shu-ga-loo, the Shy Tuna, the Camel Walk or the Hip-o-crit?

The B-52s have been spinning out the dance grooves for going on 40 years now—often crafting funny, catchy lyrics to keep brains and thrashing limbs in sync. See if you can match up the following stanzas with the songs from which they come. Some of you may need to ask your parents for assistance, but you're very likely to hear these in person at this week's show.

Let's get this party started!


1. The heat of the day's got me in a haze,
those lazy days of summer are here.

2. (We're goin' down to meet) I ain't no student,
(Feel those vibrations) of ancient culture
(I know a neat excavation) Before I talk
I should read a book.

3. Here comes a stingray
There goes a manta-ray
In walked a jelly fish
There goes a dog-fish
Chased by a cat-fish.

4. Let's go crash that party down
in Normaltown tonight.
Then we'll go skinny-dippin'
in the moonlight.

6. They do all 16 dances
Do the Coo-ca-choo
Do the Aqua-velva
Do the Dirty dog
Do the Escalator.

8. Crashers get bombed, slobs makes a mess.
Ya know, sometimes they'll even ruin your wife's dress.