More Roundabouts, Sidewalks on the Way

Road work continues on Bend's east side as part of an effort to give drivers more options to cross the city and to help walkers and cyclists get around more safely and easily. 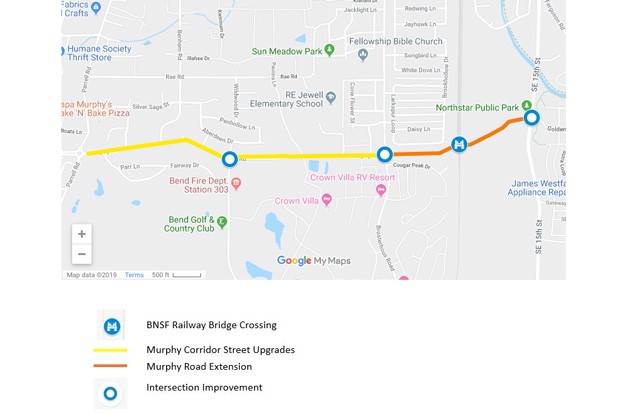 The City of Bend started a portion of its Murphy Corridor Improvements Project last week. The total project, costing about $32 million, aims to improve transportation in southeast Bend. It entails rebuilding the segment of Murphy Road from Brosterhous Road west to Parrell Road; extending Murphy Road from Brosterhous Road east over the BNSF Railway line to 15th Street, with a new bridge over the railroad tracks; adding and improving sidewalks in the area; and building three new roundabouts on Murphy Road—at the intersections of Country Club Drive, Brosterhous Road and 15th Street. Money for the project comes mostly from the city's transportation fund, with some from water, stormwater and Americans with Disabilities Act funds and from the Bend Park & Recreation District.

The work that just started includes construction of the 15th Street roundabout, plus sidewalks along 15th Street from Chloe Lane north to Ferguson Road. The southbound side of 15th Street will close to traffic in that area, although northbound will remain open, as work continues through October.

Work could start next year on extending Murphy Road; constructing the bridge over the railroad tracks; reconstructing Murphy from Parrell Road to Brosterhous Road, making it three lanes instead of two and adding sidewalks and bike lanes; and building the other two roundabouts, according to Garrett Sabourin, project engineer with the City of Bend. All three new roundabouts will be single-lane, although the ones at Brosterhous Road and 15th Street could be expanded in the future, Sabourin said.

Sabourin expects that extending Murphy Road from Brosterhous Road to 15th Street will especially help emergency services, since responders won't have to rely so much on Country Club Drive or Brosterhous Road.

City officials also expect the sidewalk construction along 15th Street from Chloe Lane north to Ferguson Road to help create a safe pedestrian route in the area, as part of a larger plan. That includes coordinating with the Bend Park & Recreation District on its planned Alpenglow Community Park, a 37-acre site just off 15th Street, south of Ferguson Road.

Bend City Council Member Justin Livingston joked that crossing 15th Street recently with his children became like a game of Frogger. “They made it!” he cheered. tweet this

Construction on that park could start in 2021. But during outreach efforts over the past couple of years on that planned park, community input emphasized "wanting to be able to walk, bike or run to the park" rather than having to drive there, said Ian Isaacson, project manager with the Bend Park & Recreation District. The district identified gaps in the area's pedestrian network, including sidewalks north of the Central Oregon Irrigation District canal, and wanted to ensure that ongoing projects—including a new high school at 15th Street and Knott Road—lined up their pedestrian paths with one another, Isaacson said.

To coincide with the Murphy Corridor Improvements Project, the district sped up its plans to build a standalone pedestrian bridge over the COID Canal on the west side of 15th Street, parallel to the existing vehicle bridge, just north of the park site, Isaacson said. It will resemble similar pedestrian bridges at Farewell, Riverbend and First Street Rapids parks, he said. The district aims to build that pedestrian bridge this winter or early next year, before the rest of the park, so it can open sometime in the spring, Isaacson said. The district also plans a 10-foot wide asphalt pedestrian trail south along 15th Street, down to Knott Road.

Currently, pedestrians have to skirt over the vehicle bridge on 15th Street, making for a dangerous situation, Isaacson noted. At a recent City Council meeting, Bend City Council Member Justin Livingston also noted the high speeds and low visibility that pedestrians can face while crossing 15th Street in that area. The city's work, besides installing the sidewalks to the north, will include a marked pedestrian crossing on 15th Street. Livingston joked that crossing there recently with his children became like a game of Frogger.

"They made it!" he cheered.